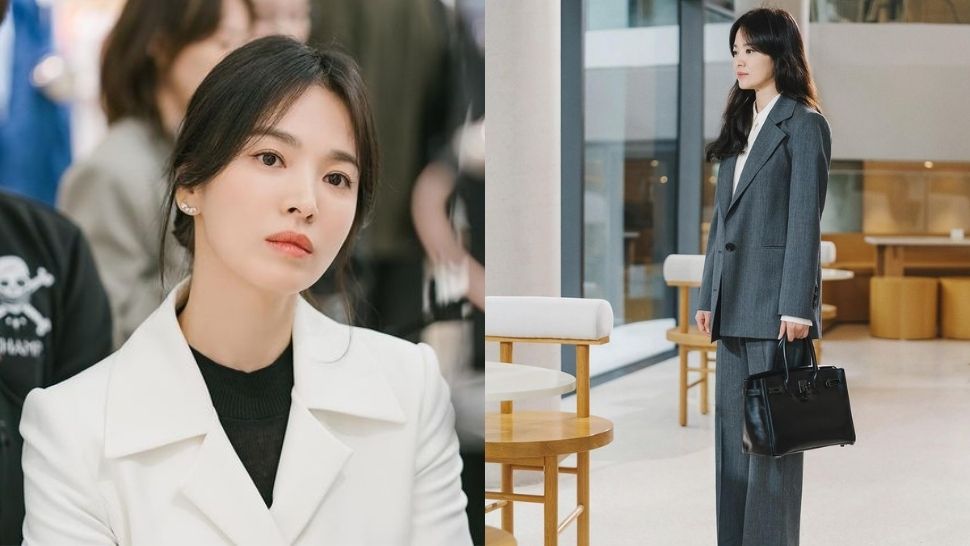 Song Hye Kyo's newest drama, Now We Are Breaking Up, is shaping up to be a fashion gold mine. The prominent Korean actress stars as Ha Young-eun, an ambitious fashion designer. However, instead of playing up the character's occupation by way of loud and extravagant outfits, the show's stylists went down the route of stealth luxury. Young-eun's wardrobe is composed of neutrals and smart pieces like collared dresses, sharp trench coats, and classic handbags. Never gauche, the character embodies a mature, polished aesthetic that fans of k-drama style will surely fall in love with.

As of writing, half of the 16 episodes are officially out on Viu. Episode 8, which was released just December 4, possibly contained the show's most solid fashion moment thus far. In it, Hye Kyo wore a baggy grey wool suit, and accessorized with one of the most coveted handbags in the world: The Hermès So Black Birkin. It's a version of the flagship bag that features black hardware, making for a luxurious, cohesive look that monochrome devotees won't be able to resist.

The So Black was designed by Jean Paul Gaultier back in 2010, right before he left the luxury house after serving as its Creative Director for seven years. While the price points of Hermès bags are already very elusive, the So Black is even more so. Its exorbitant price tag comes as a result of its rarity. Shortly after they began production of the So Blacks, Hermès discontinued the design due to reports of the hardware coating chipping off. While this was initially a point of embarrassment, it eventually worked in the maison's favor. The bag became an enviable collector's item, helped by the fact that no one really knows just how many So Blacks remain.

So, just how much how does it cost? According to a report by Business Insider, a crocodile skin unit was sold in 2019 for $209,553, which is roughly 10.53 million Philippine pesos. The one Hye Kyo wore is the So Black Birkin 30 in calf box leather, which was last priced at HKD 687,500, (approximately P4.43 million) on Christie's.

And that's not all. According to the Malaysian blog Kdrama_Fashion, the bag is from Song Hye Kyo's very own collection!

In summary, the So Black is a high-value item that bag aficianados would love to get their hands on. ICYDK, Dr. Vicki Belo used to have one, but it was tragically stolen right from its box in her closet! It's no wonder that she admitted to crying over the loss—bags really aren't just frivolous fashion buys, but investment pieces that should be taken seriously.