JUST IN: Jinkee Pacquiao Is One Glamorous Ninang at a Wedding Wearing Accessories Worth at Least P10 Million|Read more »
Fashion | By Clifford Olanday for Esquiremag.ph - Oct 3, 2020

How Filipino Model Hannah Locsin Is Chasing Her Catwalk Dreams 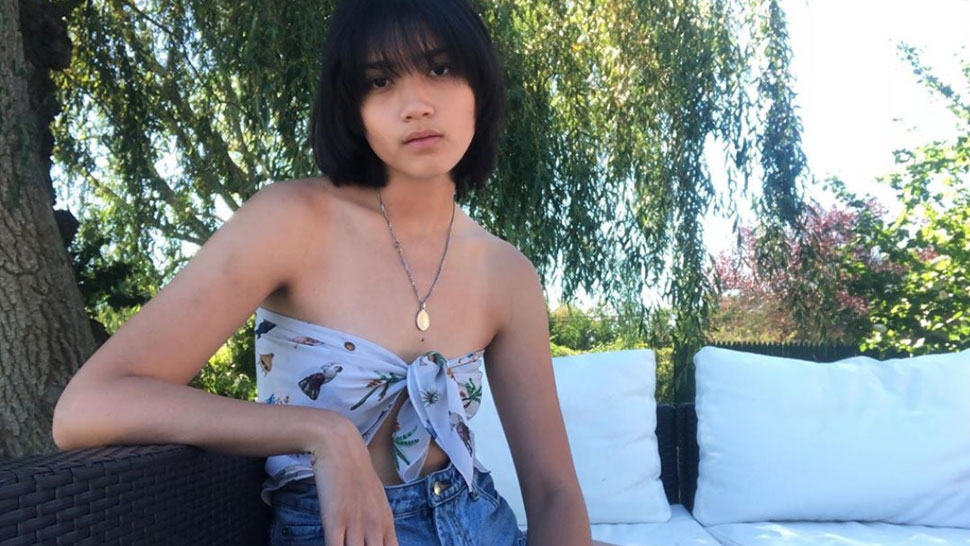 Hannah Locsin, the Filipina model with a towering five-foot-10-inch frame, a tiny 24-inch waist, and an elfin face, stepped into the spotlight when she appeared on the Gucci runway in 2019. That was a pretty big deal, not only for the model, who recognizes that there is a dearth of Filipino models working in Europe, but also for the country as the catwalk performance made Hannah the first Filipino to walk for the Italian luxury brand.

But the thing about the Milan breakthrough is how Hannah chose not to broadcast it to a lot of people because, as she says, “anything can happen… a project can be canceled.” Nevertheless, Gucci did happen and, as soon as the images and footage were beamed across the world, she heard from friends, fans, and even strangers from the Philippines. They were saluting her triumph and, for a dazzling moment, all eyes were trained on her.

“It was so surreal,” she remembers. “The support was just overwhelming, something that I’ve never experienced before, so parang naiiyak ako! Sobrang heartwarming and it really keeps me going.”

A Filipina model arrives in Paris.

She really needed that push. Her walk for the esteemed fashion house was but a part of her debut season in Europe, a time that can only be described as a whirlwind of firsts. It was her first time to set foot in the Old World, visit the places on her bucket list, and, most important for a young model, work in the capitals of fashion.

“It was the first time that I thought, ‘Oh, this is how it feels like to be an international model.’ I was shuttling between Paris, London, Milan. I didn’t have my own place yet, so I was living out of a suitcase!” she remembers.

The only downside to the many firsts was the loneliness, the nagging feeling of missing home. Locsin’s European debut was the first time that she spent eight months away from the Philippines. “That was winter pa. I was alone, plus I didn’t speak the language,” the model says. “Feeling ko that time, wala ako’ng nakakakusap for days!”

The upside was, of course, being cast for Gucci’s Spring/Summer 2020 show. The forecast, according to creative director Alessandro Michele, was the sleekness of the ’70s, and so Hannah appeared in a long-sleeved ankle-length dress with a slit running down the front. The lime green dress was punctuated by the abruptness of black accessories: fishnet stockings, opera-length gloves, a large collar, and octagonal bug-eye sunglasses with a super-sized chain. Also of note was her cool 'do, a medium shag by way of an apple cut, which swallowed half of her head.

A less capable model—or the average Gucci enthusiast—would’ve been overpowered by the wild imaginings of Alessandro, but the Filipina wore the clothes well, looked the part of an aloof member of the Gucci universe, and, most important, kept her stride on a tricky catwalk that was also a conveyer belt (like the ones in an airport).

“That was both an exhilarating and nerve-wracking experience,” Hannah says. “In my mind, I kept saying to myself, ‘Please don’t trip! Please don’t trip!’ because I’ve tripped before in Manila, so I know the feeling.”

She adds, “And Milan’s a bigger stage so yung kaba ko talaga was 10 times—no, a hundred times more!” Thankfully, Locsin wore the Horsebit ballet flats, the ones with a collapsible heel, and was able to traverse the length of the moving ramp without issue.

In all, even if she felt the overwhelming fear of falling on her face, not to mention the pressure of working in Milan Fashion Week, Locsin considers her first run in the big leagues as a blessing. Apart from Gucci, she also walked for Miu Miu, Paul & Joe, Ralph & Russo and appeared in a Gucci Beauty video (and again walked for the label’s fall/ winter 2020 show) and the cover of Harper’s Bazaar Kazakhstan.

“It’s really a big opportunity for me, not just for modeling, but for personal growth, too,” she reflects. “I never thought that I would be modeling or that I’d be moving out of my parents’ house so soon.”

RELATED STORY: This Filipina Model Is Making Waves in the International Fashion Scene

A young woman commits to a career.

Here’s a thought: To be a model is not dissimilar to being a doctor, a lawyer, and even a poor editor. Like these traditional (and less glamourous) professions, you have to choose it and then pursue it—without hesitation.

A young Hannah started modeling “on the side” when she was still studying communication arts at De La Salle University. Her dad did not mind the extracurricular activity but set very clear rules about it: The student has to focus on school above all. “After that, you can do whatever you want,” he told her daughter.

So when she graduated from college, Locsin committed. Free to pursue modeling as a career, she made the big decision to leave the nest and live in Malaysia for two months. “I knew I had to go abroad where I can experience other markets,” she says. “My parents didn’t see that coming… especially my dad. But when he saw that I was enjoying it, and modeling is really what I want to do, he just said, ‘Okay, I’ll support you basta come home every Christmas.’”

The decision proved to be fruitful as Malaysia became a sort of test run to figure out if the rookie could make it and “survive living on my own.” She shares, “And I could, obviously, because after my stint in Malaysia, I signed with my agency in New York.” Today, as listed on models.com, Locsin is signed to Supreme Management in New York, Why Not Model Management in Milan, and Established Models in London.

Hannah Locsin is a Filipino model.

And this brings us nicely to New York City, where Locsin has been living for three months now. The model’s abbreviated journey is this: New York was always the plan, but complications led her elsewhere: Paris, Milan, and London. Which wasn’t a bad detour at all. She then returned to Manila in March (“just before the lockdown”) and left for New York in July. Locsin is now chasing her dream.

You may have seen images of the Filipina recently, looking cool on New York’s mostly empty streets, while wearing the leather face masks of Fino. The local leathergoods company tasked her to be the face of its chic masks and also create the social media campaign for the goods. With her background in communications, she decided to show New York from her perspective: as a young woman exploring the famous and secret spots in the city, from a graffiti wall to Tiffany’s.

Locsin also made it personal, connecting mask, place, and outfit to memories. In one photo, she paired a blue leather mask with her favorite “good luck” top from Zara, the same shirt she wore to a Miu Miu casting. While shooting, people would stop her to ask where the cool leather mask is from and she would not hesitate to say that it’s from the Philippines. 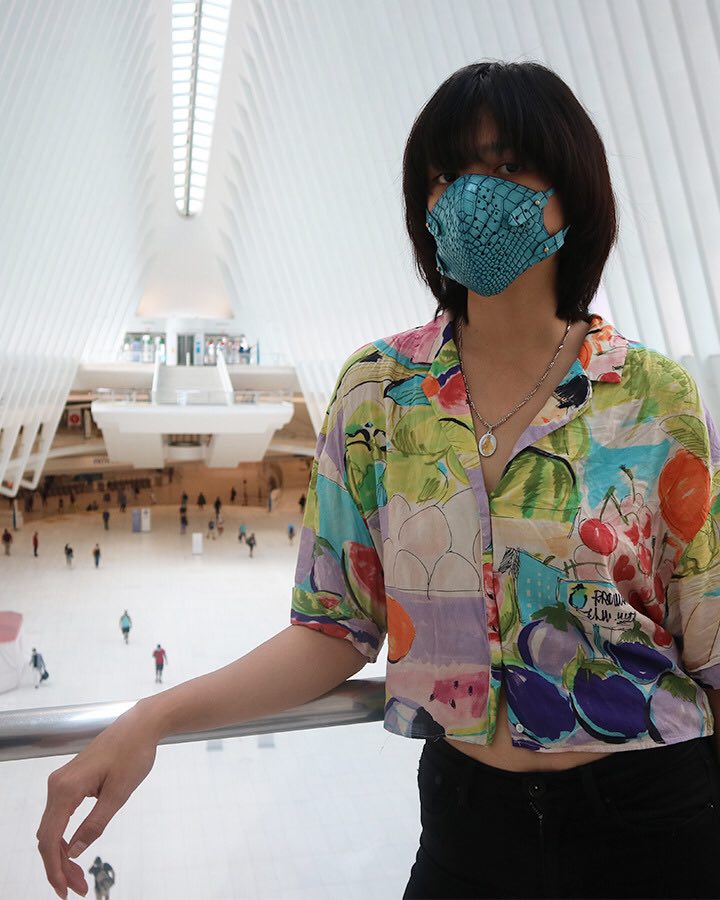 Hannah says the same about herself. Working as a Filipino model abroad, she observes how people are really curious about her identity. She shares, “I’m often asked where I’m from or people try to guess where I’m from. They never get it right because everyone thinks I’m Japanese.”

A casting director once filmed the model explaining her origins and then Locsin posted that clip on Instagram. “A lot of people responded to it with comments like ‘Yes! Represent! Represent!’” she says. “In the world of international fashion where there aren’t too many Pinays, it feels really good to say, ‘I’m from the Philippines.’”—with reporting from Devi De Veyra

This Filipina Is the New Face of Marc Jacobs' Latest Campaign