JUST IN: Jinkee Pacquiao Is One Glamorous Ninang at a Wedding Wearing Accessories Worth at Least P10 Million|Read more »
Culture | By Katrina Maisie Cabral - Dec 30, 2022 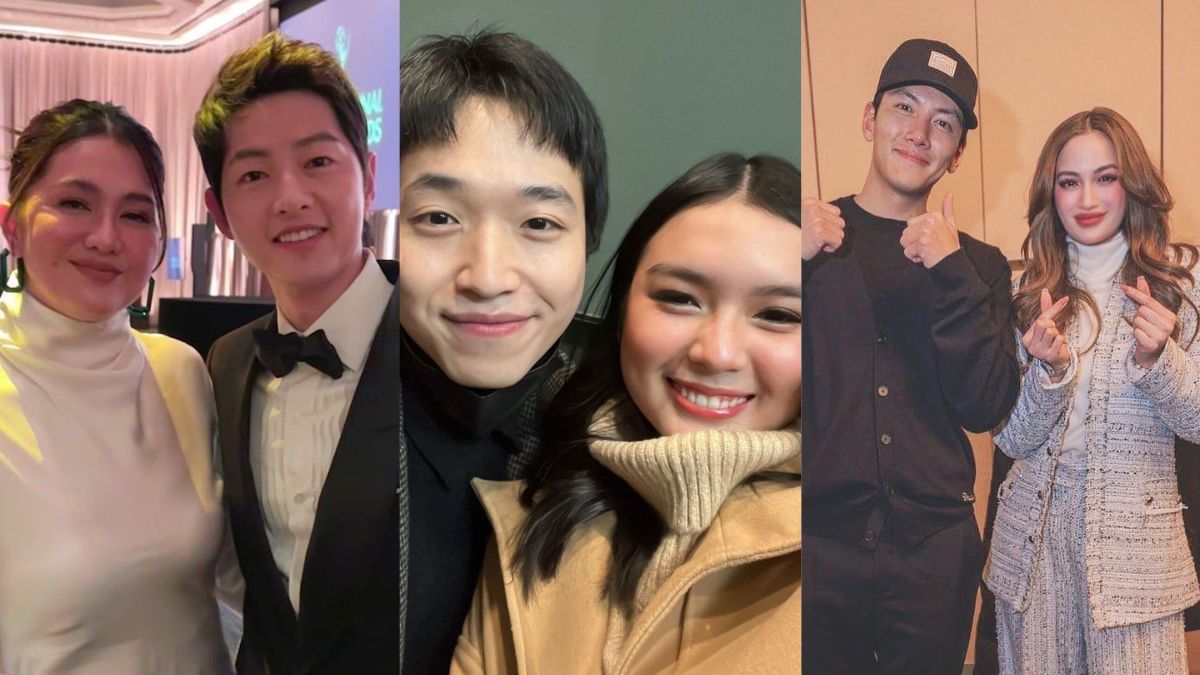 Celebrities, they’re just like us! Filipinos are known to enjoy a copious amount of K-content, and our famous local personalities are no exception. In fact, consider some of them to be part of the lucky few who have already rubbed elbows with Hallyu’s most celebrated.

And from what we’ve seen, 2022 didn’t skimp on these interactions. Ahead, we’ve compiled a list of times homegrown celebrities who went face-to-face with K-drama’s most familiar names.

Actress Dimples Romana had a winning double-whammy moment with none other than Song Joong Ki, all while representing the Philippines in a prestigious event! For the Filipina actress’ recent stint as an official member of the International Academy of Television Arts & Sciences, Dimples flew to New York City for the 50th International Emmy Awards, where she bumped into the Reborn Rich heartthrob.

“It was such a pleasure and huge honor to meet a fellow actor like you. I am a huge fan. We Filipinos LOVE youuuu,” Dimples wrote in her Instagram post.

Having dinner with your favorite actor feels like the stuff of fiction, but it’s a bonafide reality for Francine Diaz! On her trip to Seoul in late 2022, the Gen Z star shared a meal with All of Us Are Dead actor Ham Sung Min, who treated the actress, her family, and her manager to a Korean grill restaurant. Earlier this year, the Korean actor even followed Francine on Instagram!

But this isn’t the only interaction the 18-year-old has had with a Hallyu actor. During a fan meeting with Kim Soo Hyun with Bench, VIP guest and fellow endorser Francine was also up close and personal with the It's Okay to Not Be Okay star on stage, where she even received a poster from the actor.

Trips aren’t complete without some get-togethers, but what if a famous actor was the guest of honor? While on a trip to the Hallyu land for an exhibition fight, Manny Pacquiao and wife Jinkee dined out with Healer’s Ji Chang Wook, who even received signed boxing gloves from Manny himself!

Jinkee, alongside actress Arci Muñoz, was all smiles in their snaps with the Korean actor.

However, this isn’t the first time Jinkee crossed paths with the K-celebrity. She and Manny had previously met with Chang Wook in 2018 and 2019, with the couple even sending the star a coffee truck on the set of his drama Melting Me Softly.

Denise Laurel isn’t a stranger to meeting Korean faves as a loud and proud Hallyu stan! On her growing list is her certified idol Cha Eun Woo, with who she snapped a selfie during the actor-slash-K-pop idol’s Manila meet-up, alongside host Sam Oh.

6. Liza Diño-Seguerra with Jung Hae In and Park Hae Soo

Actress and former Film Development Council of the Philippines (FDCP) chairperson Liza Diño certainly came across some familiar faces at the 27th Busan International Film Festival! While representing Filipino filmmakers during the renowned event, Liza bumped into not one, but two K-drama icons, including Jung Hae In of Snowdrop, and Park Hae Soo of Squid Game and Money Heist: Korea fame.

Ji Chang Wook is surely a Filipino favorite! Count beauty queen-turned-actress Ariella Arida as a member of his supportive fandom, as she had a one-on-one moment with the actor during his Manila fan meeting for Bench.

“Ji Chang Wook, the warmest oppa I’ve ever met!!” Ariella said. “And look at that beautiful face, I cannot handle it!!!”