10 Most Watched Netflix Original Shows of All Time

You probably already know which show took the top spot. 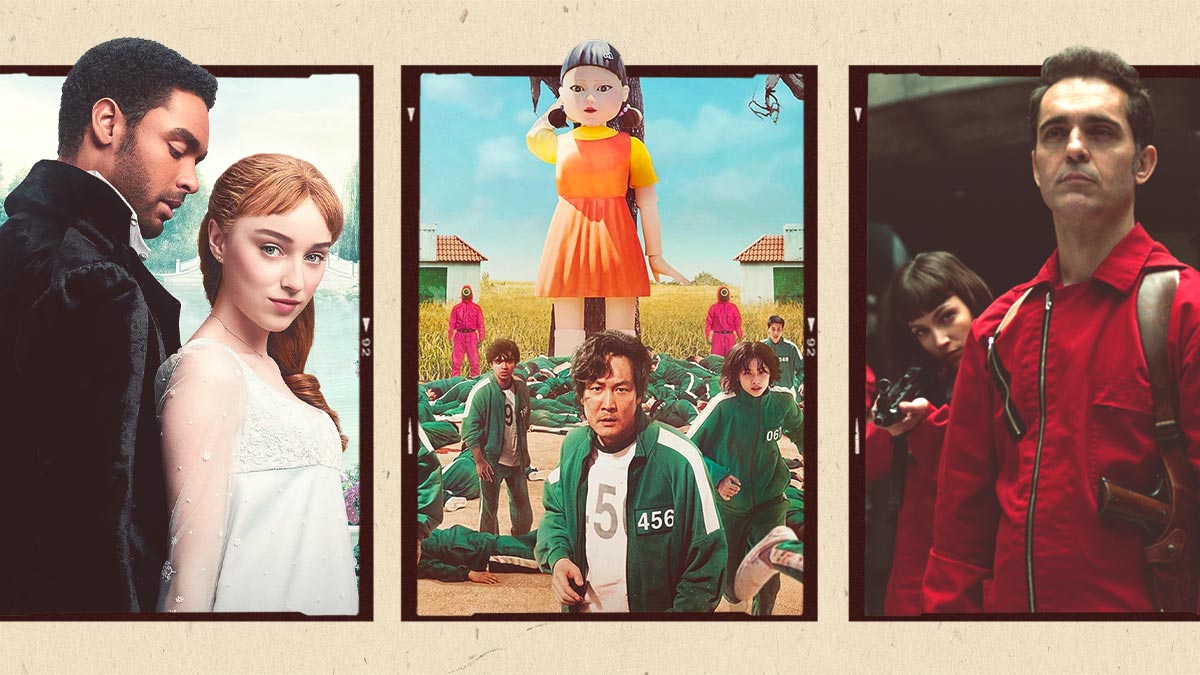 There’s nothing like a fresh new series to get the world talking. Nowadays, when there’s a hit show, a cultural whirlwind follows right after. It could be an endless stream of memes, an obsession with hot new actors, or a supercharged fashion trend—whatever it is, it makes an impact that leaves a permanent footprint on our culture. And in the past few years, no one has done it better than Netflix.

The streaming giant has succeeded in producing their own titles called “Netflix Originals,” that have gained the hearts (and dangerously glued eyes) of many. Today, we’re running down the top 10 most watched Netflix Originals of all time, in terms of accumulated view hours.

Give Gossip Girl’s Dan Humphries a knife and you’ve got yourself Joe Goldberg of You (or at least that’s what the actor Penn Badgley said in an interview). Netflix’s psychological thriller series follows the life of a stalker, chronicling his inner monologue, traumatic past, and bloody conquests. The first season was an instant success, so it was no surprise that viewers eagerly tuned into the second. It received mostly positive reviews and now boasts 457 million hours of viewership.

Luck continued to rain on the You series as its third season saw even higher views and shinier reviews; It garnered viewership hours of 468 million and was lauded by critics for maintaining its killer (pun intended) formula without losing the excitement. The You fan base was also happy to learn the series was confirmed for a fourth season.

The Maid is a Netflix limited series inspired by the memoir entitled Maid: Hard Work, Low Pay, and a Mother’s Will to Survive. It follows a young mother escaping an abusive relationship and struggling to create a better life for her daughter and herself. It was critically acclaimed for its portrayal of sensitive issues such as abuse and poverty. It premiered in October 2021 and has since reached an awe-striking viewership of 469 million hours.

13 Reasons Why is a teen drama based on a novel of the same name. It follows the aftermath of the suicide of a teenage girl and the thirteen tapes she left to explain her decision. It was met with mixed reviews coming from two parties: audiences that enjoyed the show, and mental health professionals who flagged it as irresponsible. Overall, the series amassed 476 million hours of viewership for its first season and resolved to do better in terms of addressing mental health in its following installments.

Viewers tuned in to the second season of 13 Reasons Why, heavily anticipating the events that would follow the tumultuous first season. It raked in an impressive 469 million hours in viewership. Netflix did its due diligence this time, placing cards to warn viewers about sensitive themes and contact details for those seeking help for mental health issues. Despite the eager eyes, the second season was met with negative reviews for its plot and writing.

The Witcher is a fantasy drama based on a book series of the same name. It follows a hunter-turned-mutated monster navigating a world of medieval magic. Because of the book's popularity and even greater success of its video game spinoff, people excitedly anticipated The Witcher’s first season. It premiered in late 2019 and is now fifth on Netflix’s most watched original series, with an impressive 541 million hours in viewership.

Stranger Things became a cultural phenomenon when it premiered in 2016, and has continued on its steady rise since then. Fans lovingly followed the child actors grow up on screen, with young girls like Millie Bobbi Brown and Sadie Sink (the actress on Taylor Swift’s All Too Well video) becoming stars in their own rights. For its third season, fans were nail-bitingly eager to continue the series because the gap from the second one was almost two years long. It did not disappoint as the season got 24 million household views within the first month of its release and 582 million hours of viewership in total.

The Spanish television series Money Heist was a mainstream success from its very first season. People were enthralled with the adventures of the red jumpsuit-clad characters who found themselves in dangerous entanglements season after season. The series definitely has a flair for cliffhangers, which is possibly why viewers always come back for more, with part four raking in 619 million hours in viewership.

Bridgerton follows the aristocratic family of the same name during the English Regency Era. It made a dazzling debut, becoming the most watched series on Netflix on its premiere date. It also made quite the wave in fashion, starting a resurgence of corsets and other cottagecore-type styles. In line with its success (it is now the streamer's second most watched original of all time that boasts 652 million hours of viewership), it was renewed for a second season which is set to premiere in March 2022.

To the surprise of no one, the most watched Netflix Original series right now is the critically acclaimed Squid Game. The South Korean drama’s debut season amassed a glorious 1.6 billion hours of viewership, millions more than the second placer. The series did as well in numbers as it did in cultural zeitgeist, with countless Squid Game internet challenges going viral, white slip-on vans getting sold out, and even real-life replicas of the games.

6 Must-watch K-dramas With The Most Shocking Plot Twists