JUST IN: Jinkee Pacquiao Is One Glamorous Ninang at a Wedding Wearing Accessories Worth at Least P10 Million|Read more »
Culture | By Owen Maddela - Aug 22, 2018 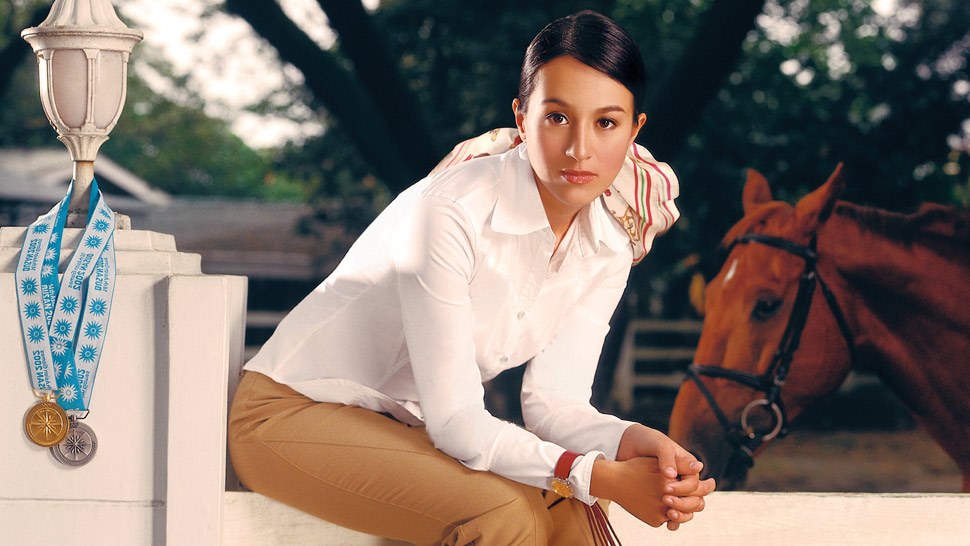 Before Anne Curtis, Georgina Wilson and a dozen other women enjoyed (or tried so hard to escape) the elusive It Girl tag with which the press anointed the next big thing, it was perhaps Mikee Cojuangco-Jaworski’s iconic showbiz run that set the template for pretty, young, talented women to emulate. After debuting as the first Swatch Girl in 1991, Mikee embraced the limelight and seized opportunities in movies and on TV while continuing to be a world-class equestrienne and dutiful daughter to national-level politician parents.

And while the Judy Anns, Claudines, and Jolinas of that era were coming of age and making a name for themselves via soap operas and Sunday variety show performances, Mikee’s magic lay in her high-low appeal. That appeal, an amazing criss-cross of showbiz, fashion, politics, society, and sports, allowed her to cross over from one medium or market to another with ease and gain admirers in the legion.

A Preview favorite (she landed on the cover of the magazine a record five times during the title’s early years), her fifth outing in December 2002 proved to be the most special. At the heels of her new life as wife and mother, Mikee came home from that year’s Asian Games with a gold medal in individual show jumping.

“This is the first time that people are looking at me as an athlete, which is what I was before my first TV commercial or my first movie. If people are going to get the chance to know me and see me as I really am, which is an athlete before anything else, then it’s a blessing,” she said in her cover story.

We caught up with Mikee many years later and found that while she is no longer immersed in the flurry of her ‘90s life or the daily grind of an Asian Games bet, she still has the power to inspire.

What are your recollections of your December 2002 cover shoot at the Manila Polo Club after your return from the Asian Games?

"I remember so much about it! The accidental [Hermès] bandana top and my [Adidas] sneakers that ended up on the cover, thinking to myself that I never imagined I would wear a tank top, a ruffled skirt, cowboy hat and boots [in the inside pages] but ended up loving it. I remember borrowing Boytoy who belonged to one of my closest friends, Vic Barba; but mostly I was happy to be back on Preview to share something very important in my life."

For a great part of the ‘90s and the early aughts, you embodied pop culture magic: You were a very successful brand ambassador, an movie and tv personality, a public figure given your family's political background, and an excellent athlete. How would you describe that time in your life when you were all those things at once?

"The combination of all those was very exciting to me, and it was a huge adventure and a lot of fun to be able to push myself hard physically and mentally just because. I also believe having all those things going on showed me there were many sides to myself as a person, and it taught me that I could always learn and improve. At the same time, when there was a part of my life that could be going better, there was always another part that was very encouraging and didn’t allow me to feel bad about myself. So in that sense, there was always something positive which cleared my mind to hurdle the negative. And faith always saw me through.

"We also had a strict rule where I was not allowed to work on Sundays. That day was reserved for church, family, real life and recharging. Looking back, I believe that rule played a huge part in everything I was able to do.

"Most importantly, I always had a strong support system in each of those areas in my life, many of them overlapping."

Together with your sisters Maimai and China, you were labeled an It Girl. How did you feel about the attention that was given to you by the media and what are your thoughts on the label?

"The It Girl tag was very flattering, but more than that there was that responsibility to be worthy of being perceived as such. To me, that meant not just being interesting to others by pleasing myself and making that attractive, because at some point an It Girl has to develop into someone that somehow fulfilled an expectation. So maybe the title doesn’t mean you have arrived, but rather means you are expected to achieve something in life that goes beyond yourself. That also means I still have A LOT of work to do. [Laughs.]"

What do your children know about that time in your life? What are their thoughts about it?

"I don’t think they know much. Dodot [Jaworski] and I became too busy with them when and since they were born that it’s almost like we left an old life to start a new one without much chance to talk much about the past. But maybe now that they’re older it would be good to talk about our lives before them. They see pictures and videos online, they used to ask why people wanted to have pictures taken with us, and they see medals hanging on the wall. But we never really had conversations about why and how. Maybe it will show them another side to Dot and me and hopefully they will realize that no matter what one wants to do in life, kailangan pawis muna bago porma."

After marrying in 1999, you became less active in showbiz but were able to excel in your signature sport and brought home a gold medal from the Asian Games. Are you still a practicing athlete on top of your duties in the International Olympic Committee (IOC)? How often do you ride now?

"Ironically, since I became an IOC Member I have stopped competing. There has just been so much less time for me now to ride. While I still do, I ride much less and at a different level with a different focus since I have a nice young horse that I bred and am beginning to train now. It’s very interesting and I am learning a lot in a different but extremely important area of the sport. Though I would love to get back in the saddle more regularly and get back in the ring."

What lessons from that specific time in your life still apply to your quieter life outside of the radar today?

"The value of hard work, respecting people who work hard and honestly, gratitude for the blessings and opportunities that we are given. To always remember the people God brings into our lives who have contributed to what we are, and have given us support, and to apply ourselves in such a way that we are able to also be a blessing to others just as we have been blessed by others.

"But mostly, surrendering to God’s will in my life, and always searching for His plan and purpose for me, knowing that the honor and glory all belongs to Him. If I did not believe this, I would not have [landed that cover]."