JUST IN: Jinkee Pacquiao Is One Glamorous Ninang at a Wedding Wearing Accessories Worth at Least P10 Million|Read more »
Culture | By Marj Ramos Clemente - Oct 9, 2020 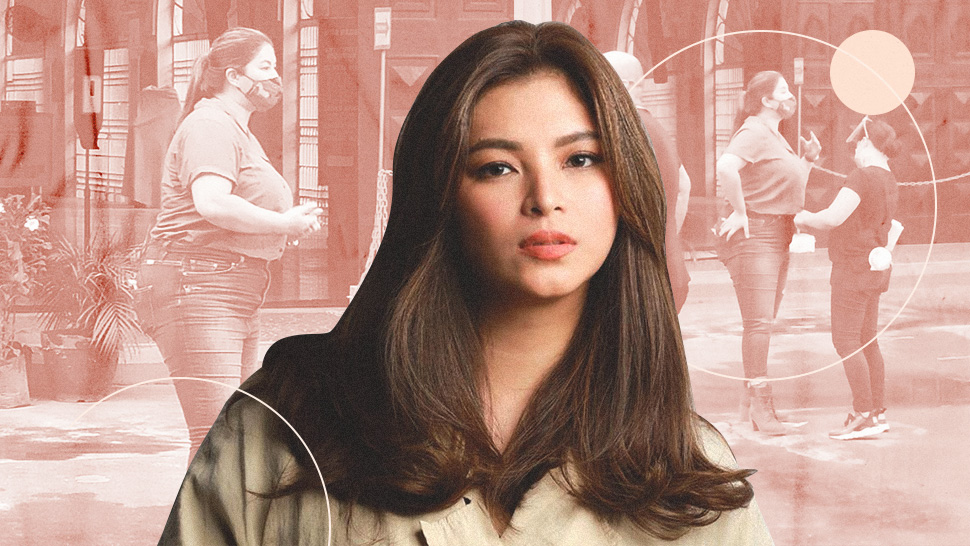 IMAGE instagram/therealangellocsin, Angelica Santos
It's not the first time her photos have surfaced online, yet people are still not done giving unsolicited comments about her body.

Back in June 2020, Angel Locsin went viral on social media for a reason that’s not at all related to her humanitarian efforts amid the COVID-19 crisis. The 35-year-old actress—who has been preoccupied with raising funds for mass testing and setting up sleeping tents for health workers—was photographed in dark jeans, flat sandals, and an olive green cotton T-shirt. She was carrying a black backpack and wearing a mask, with her long hair pulled back in a ponytail. Nothing about how she looked screamed “celebrity” or was worthy of too much attention—nonetheless, her name still made headlines because people felt the need to comment on her weight gain.

Angel’s “new figure” was quick to become a trending topic on social media. And while some netizens resorted to body-shaming right away, many jumped to Angel’s defense, flooding Twitter with their call for self-love and body positivity. One user notably tweeted, “Angel Locsin has nothing to prove. She is a two-time FHM Philippines’ sexiest woman and our real-life Darna.”

This happened just roughly three to four months ago, mind you.

Yesterday, October 8, new photos of Angel surfaced online. The actress was spotted by a netizen while filming for her TV show, ABS-CBN’s Iba ‘Yan, at Our Lady of Grace Church in Caloocan City. She was wearing a collared blouse, lace-up ankle boots, and a face mask in the same earthy shades that make for a nice monochromatic palette save for the fact that she was wearing blue denim jeans. And frankly, she looked great! But in what seems like a bad case of déjà vu, she’s once again going viral for the wrong reason: her weight. (Note the emphasis on “again.”)

Unsurprisingly, fat shamers everywhere are having a field day while scrutinizing every curve of Angel’s body. We’ve heard these demeaning insults thrown at women time and again. And so to Angel’s defense, her supporters are echoing the same sentiments they had back in June, showering her with praises that channel body positivity and self-love amid the seemingly endless online discourse about her weight gain.

“Still beautiful,” one netizen comments. “Chubby is the new sexy,” says another. Just like last time, Angel’s new photos drew mixed reactions—they were either fat-shaming her or commending her for still looking beautiful despite her weight gain.

Let’s be honest here, though: Fat-shamers are a big problem but they're not the only problem. It’s 2020, and we still can’t normalize women gaining (or losing) weight. That in itself is another glaring stumbling block staring at us right in the face.

Angel has done so much in terms of aiding our country’s coronavirus response, but people only seem to care about how many pounds she’s gained. Yes, Angel Locsin is bigger—she’s now “thicc,” or “curvy,” or what have you. But when is everyone going to move on from discussing this same old ridiculous topic about her weight gain?

Do we have to keep defending her from fat-shamers, or worse, keep fat-shaming her every time she makes a public appearance? Are we really entitled to give our own two cents on the matter each time someone posts a photo of Angel or another celebrity with a bloated belly? What’s so fascinating about a woman gaining weight? If it’s something so normal, then why are we even still talking about this?

Filipinos need to unlearn the toxic culture of giving unsolicited comments about someone else’s body—be it a famous celebrity or your clueless neighbor. We need to educate even our possibly well-meaning titas from saying, “Parang tumaba ka yata,” or “Hija, kumain ka ng marami. Ang payat payat mo.” I’m okay, thank you. Comments like these are unnecessary, disrespectful, and completely uncalled for.

Backhanded compliments that only fuel this nuanced debate are just as bad. Food for thought: Telling someone she’s still beautiful despite her weight gain is basically the same as saying “You’re beautiful but…” It’s not a compliment. It’s a sympathy vote.

It’s not the first time we’ve seen Angel with her new figure, and it definitely won’t be the last. And we can’t do this to her every single time and put her body in a spotlight that she didn’t ask for. If you can’t keep yourself from minding your own business and leaving another unsolicited comment or two, then you’re likely a part of the problem.

That about sums it up, so let’s just leave the conversation at that.