LOOK: Julia Barretto Is Ready for Mature Roles, Which Means Living Life on Her Own Terms|Read more »
Fashion | By Sofia de Aros - Jul 24, 2021

The 32nd Olympics finally kicked off yesterday, July 23! Given the unfathomable preparation that goes behind each Olympics run, it was poignant to see it come into fruition once and for all, after the pandemic crushingly forced its postponement last year. True, this year's athletes weren't greeted with a live audience of thousands, but each participating team made sure to turn up in striking outfits that represented their homelands.

Departing from the usual suit-and-tie getup, several teams made entrances in zany prints and costumes emblematic of their nations. The Liberian team notably turned the Parade of Nations stage into a runway– Liberian-American designer Telfar Clemens, the hands behind mononymous brand Telfar, dressed the entire team in innovative jerseys from a never-before seen collection.

We watched the Parade of Nations from top to bottom, and have rounded up the most unforgettable uniforms to grace the stage. Take a look:

One of our favorite uniforms has to be that of Angola. The flagbearer's golden skirt is an instant scene-stealer, yes, but the rest of the team don't just fade into the background. The designs swirl together seamlessly and cohesively. The coquettish sleeves on the minidresses are feminine and powerful, while the colorways of the mens' shirts are fun and unexpected.

Ralph Lauren has been utilizing the Parade of Nations stage as a runway for some time now (the U.S. team regularly wears the brand), and it was high time for other designers to follow suit. Telfar dressed the Liberia team in elevated maxi jerseys that were an interpretation of the Liberian flag. One athlete bore the flag's star on his shirt, while the forerunning athlete wore bright red.

Apparently, the Bermuda team has been making it a point to don bermuda shorts each time they hit the Parade of Nations stage. Pun totally intended. This time, they wore baby pink shorts, and wore matching masks. This is quite a subversion of the conventional entrance suit. 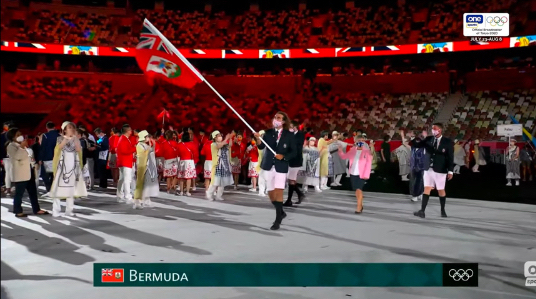 New Zealand kept it spare by donning grey shirts and black suits, leaving the statement-making to their flagbearers. The flagbearers wore the traditional Te MÄhutonga, a prized kÄkahu (cloak) that reportedly takes thousands of hours to complete.

The Benin team channeled the jubilant, childlike energy of the brand Marimekko with their quirky outfits. They wore purple pajama sets, which we're not likely to forget anytime soon.

Uganda kept it traditional with outfits that were directly derived from their national flag. The women wore square neck maxi dresses in a vibrant red and yellow colorway, while the men wore color block shirts with traditional woven scarves.

Kaleidoscopic prints graced the Olympic stage, courtesy of the Malaysian team. The athletes donned printed maxi skirts paired with red blazers. The men wore matching headscarves. All in all, this unorthodox uniform was a welcome disruption.

Zebra print is in, and the South Africa team is proof! Their uniform of choice: A safari romper with a matching mask.

Aruba brought a different take on the conventional entrance suit. Their take? A cool-toned gradient. Given that Aruba is an island in the Caribbean, it was fitting that their uniform's colorway was reminiscent of clear waters on a sunny day.

For the Philippine team's grand entrance, they wore none other than Rajo Laurel! The classic barong took center stage, plus traditional woven sashes.

Longchamp's Classic Le Pliage Bags Are Getting An Eco-friendly Makeover