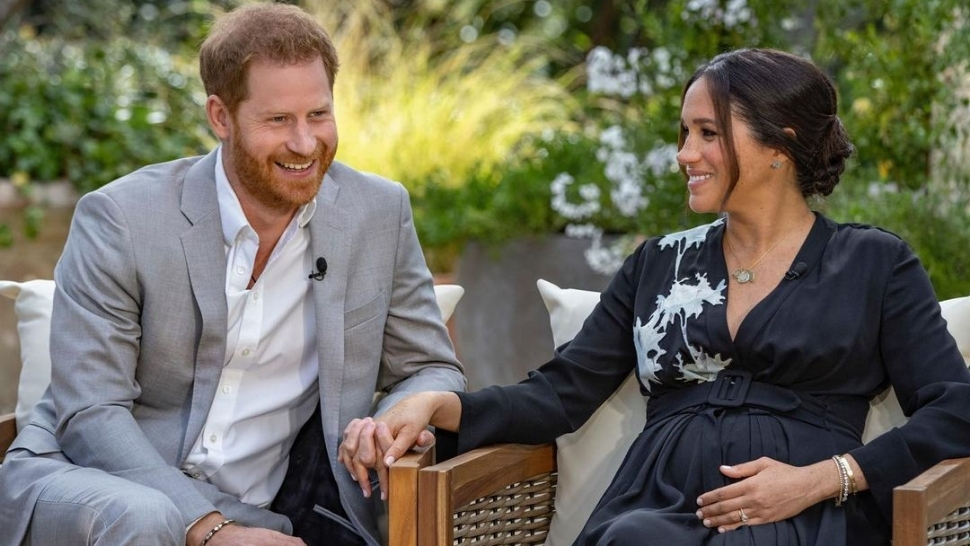 In case you've been under a rock, today's talk of town is Prince Harry and Meghan Markle's tell-all interview with Oprah Winfrey. It's the couple's landmark interview since they've decided to "step back" as senior members of the Royal family last March 2020.

Of course, all eyes are on the Duchess of Sussex, not just for what she has to divulge, but also for whatever she's wearing. Below, we list down three notable details from Meghan's Oprah interview outfit and what they all mean.

The Duchess have been a longtime fan of the brand, having been vocal of her love for its makeup line. But it is her first time to wear a piece from the main Armani line. For the occasion, Meghan chose a black triple silk georgette dress with a tasteful v-cut neckline, and asymetrical hem.

Aside from its polished yet relaxed aesthetic, Meghan's choice of dress actually costs a lot. By a lot we mean almost P230,000! This 4700-dollar frock features a botannical print on the right shoulder, a strategic design placement, considering that the camera would focus more on her upper body. She also slipped on a pair of stilts from Aquazzura to finish her look.

A closer look at the Armani dress and you'll see that the print is actually a white lotus flower, which in the language of the blooms, is a symbol of rebirth or enlightenment. It also means survival or will to live—perhaps a nod to Meghan's miscarriage last year and her struggles with her own mental health while in England. In the interview, Meghan opened up saying, "Look, I was really ashamed to say it at the time and ashamed to have to admit it, to Harry especially, because I know how much loss he's suffered. But I knew that if I didn't say it that I would do it—and I just didn't want to be alive anymore. And that was a very clear and real and frightening constant thought."

Meghan's choice of jewelry speaks volumes of where her heart is in the situation. First, we see her necklace created by British designer Pippa Small as well as her earring from Birks, a Canadian brand the Duchess is known to favor. These trinkets seem to be simple odes to the countries which she has called home at one point in her life.

Moving on to her stack of bracelets, Meghan is spotted to be wearing a diamond Cartier tennis bracelet that belonged to Princess Diana. The People's Princess notably wore this piece to a performance of Swan Lake at the Royal Albert Hall in June 1997, one of her last public appearances before her tragic and unforeseen demise. It is also worth noting that Prince Harry took out two stones from his mother's diamond bracelet to make Meghan's three-stone engagement ring. According to People magazine, she wore it "so [Diana] could be with them."

The Duchess is also seen wearing a Cartier Love bangle, which her husband has also been spotted wearing. The Love bangle, designer by Aldo Cipullo in 1969 is a symbol of enduring and everlasting love.

It's not just Meghan who wore a well-thought out outfit. Prince Harry also chose a suit that may have sentimental meaning. Eagle-eyed royal fans noted that he wore a similar-looking gray suit that he had previously worn when they introduced their son Archie Harrison to the world.