JUST IN: Jinkee Pacquiao Is One Glamorous Ninang at a Wedding Wearing Accessories Worth at Least P10 Million|Read more »
Fashion | By Katrina Maisie Cabral - Jan 6, 2023 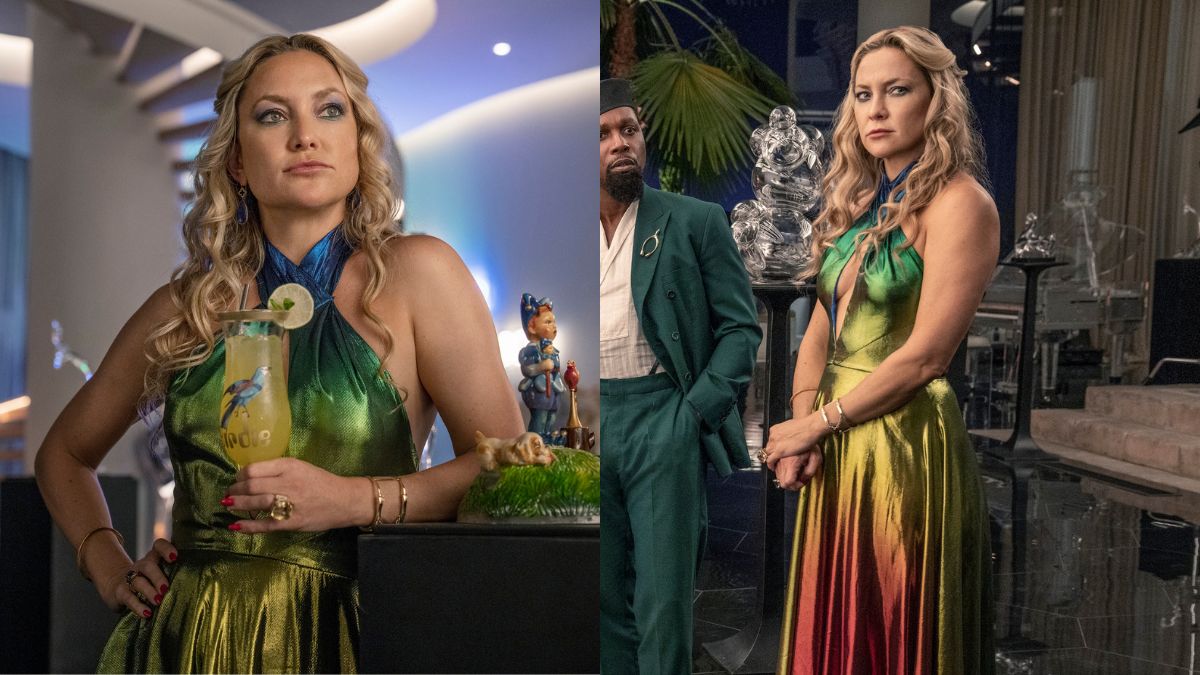 IMAGE Glass Onion A Knives Out Mystery/Netflix
An entire scene was dedicated to the characters just appreciating Kate's dazzling dress in the film.

Much like its first film, Netflix’s Glass Onion: A Knives Out Mystery is currently the talk of the town. But aside from the murder plot that has viewers dodging spoilers, fashion is, yet again, a highlight of the universe. If 2019’s Knives Out had everyone tweeting about Chris Evans’ cozy cable-knit sweater, Glass Onion has something for tropical lovers: Kate Hudson’s shiny rainbow dress!

Shifting away from the autumnal and rustic atmosphere of the Benoit Blanc mysteries’ first film, Glass Onion is a feast for the resort wear-inclined. The sequel to the whodunit series sees Daniel Craig’s detective character on the shores of a Greek private island, where a group of the nouveau riche huddle together to solve a murder mystery game that ultimately becomes all too real.

Among the colorful cast of characters is Kate Hudson’s Birdie, a zany supermodel-turned-fashion designer who happens to be at the scene of the crime. In one moment, her friend and billionaire Miles Bron (Edward Norton) twirls her around in a dance, mesmerized by the shimmer of the dress’ fabric.

While we won’t divulge all the spoilers here, the particular outfit was such a standout that a whole scene featured the characters appreciating the dress’ effect. The metallic floor-length gown, with its criss-cross halter straps and peekaboo cut, glimmered in the light with every spin.

However, unlike the off-the-shelf sweater Chris wore in Knives Out, Kate’s rainbow dress won’t be easy to get. In the same interview, Jenny revealed that the dress—alongside Kate’s whole Glass Onion wardrobe—was actually made from scratch!

“Style goes in and it goes out. Her character, there was something so glamorous and something so old-school Hollywood,” costume designer Jenny Eagan told Variety. “It’s hard to find a print that’s not in your face all the time with designers. I thought, let’s go bold. We can make it our own.”

While the design of the dress was an important part of the formula, according to Jenny, Kate’s appeal played a vital part, too. “She was so open to it and such a delight,” Jenny said. “It’s her attitude and her joy. She exudes this beautiful confidence, and that’s so lovely to dress because there’s no inhibition to it.”

Did You Know? Jenna Ortega’s Shoes in "Wednesday" Are Actually From a Famous Luxury Designer Brand