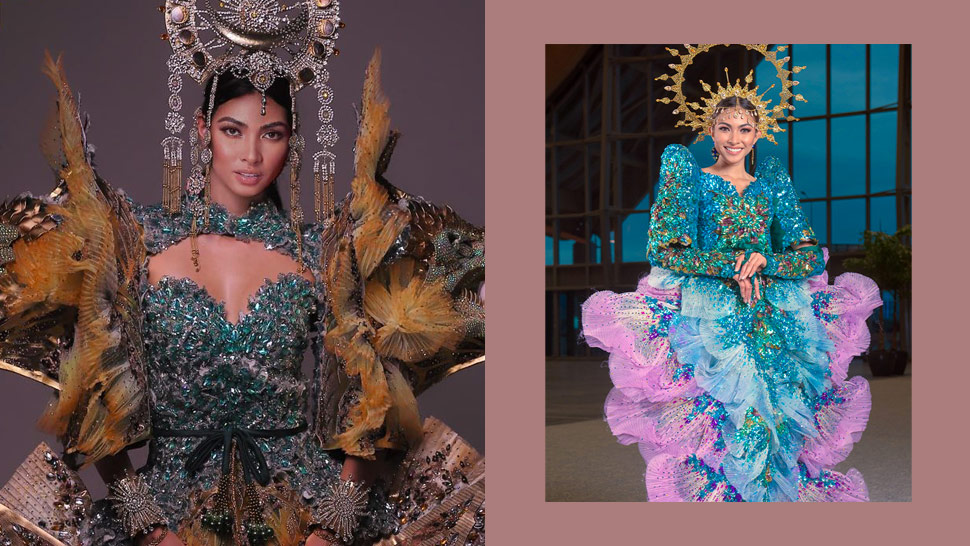 The reveal of Beatrice Luigi Gomez's Miss Universe 2021 national costume has her staying true to her "silent killer" monicker. The jaw-dropping ensemble, created by Filipino designers Axel Que and Manny Halasan, is a reimagined version of the beauty queen's Bakunawa costume for the national pageant.

According to Axel, Bea's MUPH costume was "restrained," and represented the "mid-life" point of the mythical dragon, whereas this new costume represents its final form: The golden lunar dragon.

"I wanted to take everyone on this journey of growth and maturity, not just for the costume itself, but also as a metaphor for Bea’s personal evolution," he says.

"This is a personal, hypothetical envisioning of what the Bakunawa would look like had it succeeded in devouring the last moon."

In contrast to the vibrant hues and dainty details of the initial version, Bea's costume for the international pageant is almost entirely colored in gold. It's truly on a league of its own, featuring two dragon heads on each shoulder, intricately-made floor-length fins, and an opulent headpiece by Manny Halasan.

"I chose gold to render the whole piece in because aside from its divine beauty, it is considered as the perfect element (because it’s chemically one of the least reactive), and to hopefully imbue this characteristic to the wearer, much like an enchanted armor," Axel explains.

Meanwhile, Manny shares that the beauty queen's headpiece captures the beautiful transitions and different faces of the moon. The hand accessories were made to complement it, bearing elements and shapes reminiscent of its inspiration.

On Instagram, Axel writes about how hoored he is to share this garment with the world through Bea. "I believe that this final rendition of the Bakunawa, will serve as the perfect conclusion to this design chapter in my life," he writes. "I’ve poured so much of myself into engineering this garment, and I am filled with so much joy to be able to share this project of unbridled artistry and craftsmanship. I couldn’t think of a better punctuation."

Overall, this ensemble couldn't be more fitting for a queen who's in it to win the Philippines its fifth Miss Universe crown. Good luck, Bea!

Watch the video below to get a closer look at Bea's national costume:

Did You Know? Bea Gomez's Golden Terno Dress Was Originally Made for Rabiya Mateo