JUST IN: Jinkee Pacquiao Is One Glamorous Ninang at a Wedding Wearing Accessories Worth at Least P10 Million|Read more »
Fashion | By Isha Valles - Aug 15, 2020 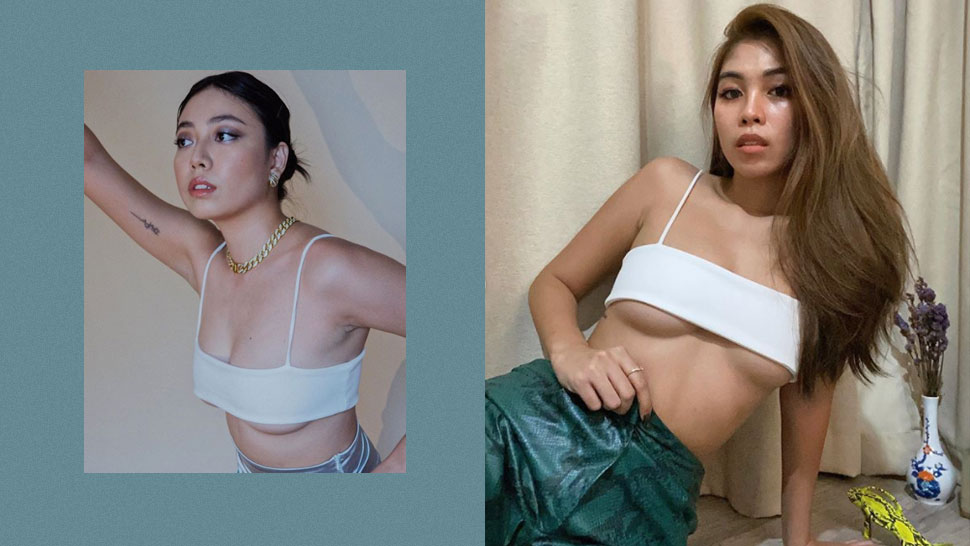 Take a break, cleavage. Underboobs are having a moment.

In the realm of hubadera dressing, you could say that options abound for baring your midsection, décolletage, legs, and bum. You could even say that the Filipinas that subscribe to this aesthetic have mastered the art of styling themselves because of the bounty of options. But now, something new has been thrown in the mix and the early adopters are among the coolest cats in our feeds. Welcome the underboob top, ladies!

Relegated mostly to swimsuits—from as early as Anne Curtis’ snakeskin bikini in her 2011 film “No Other Woman” to Maggie Wilson-Consunji baring a bit below the top of her maillot at Sarah Lahbati’s bachelorette in Siargao last March—the style falls a way distant second to cleavage-baring fodder. But perhaps it’s because of the lack of available items in the market that it hasn’t gained as much traction.

Well, a new style from a young designer has come up to remedy that situation. Under her brand Anabeza, Khirsten Anabeza released a mini collection and perhaps the most eye-catching is the Koui Underboob Strap Tube Top. It comes in black, white, and gray, and is so very minimalist in that it’s a strip of fabric that covers the top half of one’s breasts revealing the lower half beneath. Sleek, yes. Sexy, super!

“For this collection, I made sure that the pieces would represent unique minimalist styles that, at the same time, remove the stigma that showing too much skin means you want to look seductive. I believe that we can wear revealing clothes and be sophisticated and classy at the same time,” Khristen says, emphasizing that women should be able to reveal parts of their body with pride. She even made sure that women with different bust sizes could wear the top as the XS to XL sizing can fit a 32A up to a 38D.

She credits her penchant for revealing clothes as the true source of the design: “I’ve worn a lot of clothes that show off my cleavage, but I had yet to wear a top that is comfortable and would show my underboob area.” And she wasn’t alone in this mindset. Influencers like Ida Anduyan, Jeline Catt, and Katt Valdez gravitated towards the top, showing how it fits into any style type. Ida went street, wearing it atop oversized jeans. Jeline took reference from ’90s glam, donning a silky silver skirt. Meanwhile, Katt amped up the power with snake-print pants. Khirsten herself has shown how to wear it beneath a blazer, or layered over a white shirt.

“The most popular color is white,” the designer affirms, also sharing that sales of the top have spiked since the three influencers posted their photos wearing it. Retailing at P700, it’s a great addition to a hubadera wardrobe. The style’s simplicity makes it a classic, so to speak, when it comes to skin-baring staples.

If you’ve been charmed by the Koui Underboob Top and its styling possibilities, go to @anabeza.ph on Instagram and fill out the order form, stat!