PSA: How Much It Costs to Stay at the Rancho Bernardo Luxury Villas and Resort|Read more »
Culture | By Andie Manankil - Jun 4, 2021

The Korean OST is sung by Filipina actress and singer Kristel Fulgar! 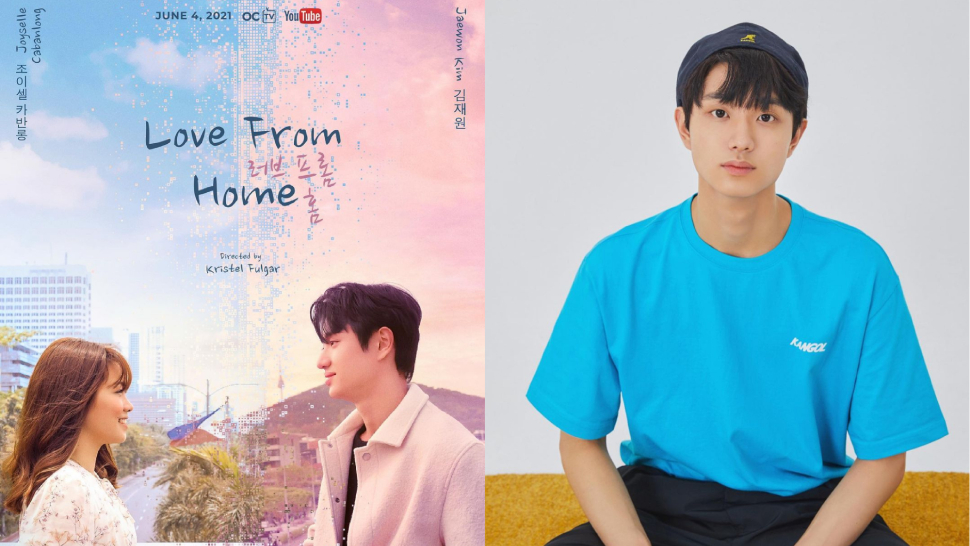 Admit it or not, deep down inside, every Filipina K-drama fanatic imagines meeting their one true love in the form of a handsome Korean man. Additional points if he resembles the looks of our favorite Hallyu stars like Song Joong Ki and Park Bo Gum.

With the upcoming local web series, Love From Home, K-drama fans can get a peek at what their dream would look like if luck were on their side and that were to really happen! Set in both South Korea and the Philippines, viewers will find a cross between the two countries’ cultures as well. Isn’t that exciting?

Below, we’ve listed down everything you need to know about the Filipino-Korean web drama "Love From Home."

1. The plot is relatable and is set during the pandemic.

Jana, who works as a flight attendant in Pinoy Air, is part of those hit by the massive retrenchment caused by the prevalent pandemic. As part of her efforts to curb the consequences of being let go at work, she decides to take on whatever side job she can to survive. From selling her pre-loved clothes online to eventually taking on the role of a remote English tutor—whatever it is, Jana takes them on with a positive and courageous disposition.  However, when she meets her online Korean student, Lee Ji Yong, or as he prefers to be called, Jay, her little sideline as a teacher significantly grows to become bigger and more meaningful than it started out to be. How so? May it be finding one’s passion, purpose, or love—we’ll just have to tune in to find out!

2. It has a cast of fresh-faced actors.

Jaewon Kim, who plays the charming Korean student Jay, is actually a new kid on the block—both for Filipino viewers, and in the entertainment industry. In his interview with the director of Love From Home, he mentioned that this show will actually be his first undertaking as a professional actor.

Don’t underestimate this newcomer though, because he’s no newbie when it comes to acting in commercials and striking poses as a model, as he’s been doing just that for six years already! Just check out his Instagram and you’ll know what we mean when we say he’s got the makings of a K-drama star.

On top of the 21-year-old’s busy schedule, he’s also pursuing his degree under the prestigious Chung-Ang University in Seoul, South Korea.

On the other hand, Joyselle Cabanlong, is a 23-year-old local actress here in the Philippines who’s already made her mark in the entertainment industry. In fact, it was her notable performance in Guerrero, an indie film led by award-winning director Carlo Ortega Cuevas, that caught the attention Love From Home's director.

Fun fact: Joyselle is also a proud K-drama fanatic, and her personal favorite is the hit webtoon adaptation What’s Wrong with Secretary Kim?. Just as you might expect, her favorite Korean actor is none other than dreamy Park Seo Joon!

3. The Korean OST is sung by Filipina actress Kristel Fulgar.

Entitled Smile Again, you’ll be surprised to know that this Korean song was actually sung by Filipina actress and singer Kristel Fulgar. Self-taught in the Korean language and an avid fan of K-pop and K-dramas too, she shared in her vlog how recording her very first Korean track is actually a dream come true.

She was especially thankful that she got to record the song with Yohan Kim, or "Big Boss" as she fondly calls him, the CEO of Korean skincare and cosmetics brand The Face Republic and a usual guest in her vlogs. She even shared how it actually wasn't her who envisioned the idea for the OST, but rather Yohan himself—for which she’s extremely grateful for.

For the composing and arranging, Kristel decided to again tap producer and rapper, Mathi, who she previously worked with for the OST of her web series, Luv Express. FYI, Mathi is also the creative behind the theme song of the popular K-drama My ID is Gangnam Beauty.

More of their recording journey through various snippets can be seen in Kristel’s vlog here.

4. The show is also co-produced by Kristel and Yohan.

Kristel is no stranger to taking the lead even in her own projects. In fact, she’s done this as the producer, director, writer, and female lead of her previous web series, Luv Express. The aforementioned drama aired in the channel that she spearheads as well. Wow! Talk about the epitome of an independent woman, right?

For Love From Home, she decided with Yohan, who’s now her co-producer, that it’s best to give the limelight to another actress, which happened to be Joyselle. She even quipped in the vlog that features Jaewon’s interview, “Nakakaumay naman yung puro mukha ko na yung nakita niyo sa OCTV.” Nonetheless, she takes pride in this web drama and considers it a chance to hone her skills in producing and directing.

The awaited web series is slated to premier on One Click TV’s (OCTV) channel on Youtube this June 4.

Watch the official trailer for the show below!