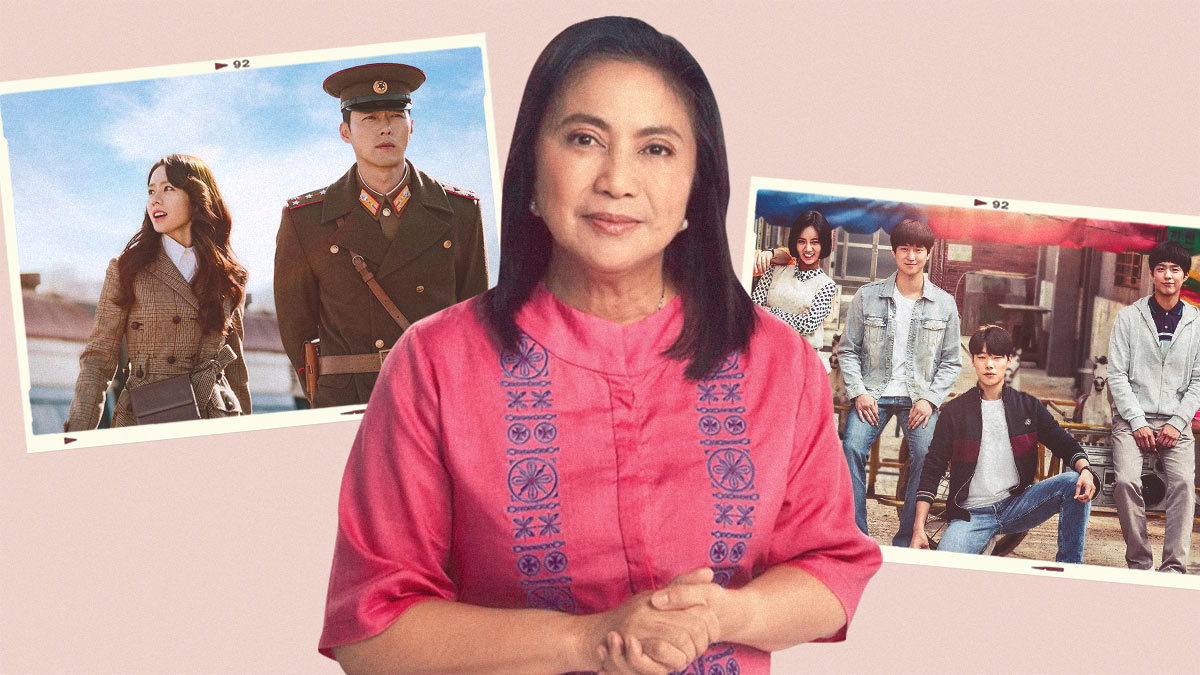 IMAGE YouTube/Leni Robredo, Crash Landing On You, Reply 1988/NetflixILLUSTRATOR Bacs Arcebal
As a huge K-drama fan, here's how she plans to do it.
Shares
Share
Tweet
Comments

Given its massive production value, engrossing storylines, and quality acting, the Korean wave—popularly known as Hallyu—has unsurprisingly entertained even the most influential individuals, from Hollywood stars to local politicians. The latter of which includes Philippine Vice President Leni Robredo. In a roundtable interview with lifestyle media, the VP confessed to being a huge K-drama fan and revealed that she plans to draw inspiration from how South Korea successfully churned out phenomenal TV shows, aiming to apply it to our very own local entertainment scene.

The Presidential aspirant, who used to watch K-dramas with her daughters before she got busy with typhoon relief and COVID-19 efforts, counts Crash Landing on You and Descendants of the Sun as some of their household favorites. (She once shared a list of her fave K-shows here!)

The rising tide of popularity of all things Korean is undeniable—consider the prominence of K-pop groups BTS and Blackpink. And of course, even someone living under a rock must’ve heard of Squid Game. The smash-hit has even surpassed Bridgerton as 2021’s most-streamed show on Netflix.

That being said, none of the aforementioned is an overnight phenomenon. Rather, it’s a product of a state-sponsored attempt to take hold of “soft power,” a popular term coined by Harvard political scientist Joseph Nye, referring to the intangible power a country cultivates through image-building, as opposed to “hard power,” which pertains to economic and military forces.

In line with this, the South Korean government is known to invest in its entertainment industry, giving an excellent base for its citizens to experiment and create material that truly taps into the zeitgeist.

The goal for Leni is clear. It's to "create a culture that fosters artistic excellence by ensuring the welfare of artists, their protection, education, and opportunities." She also notes that "a large part of this will come from government."

One step she’ll do to achieve this is to clearly define the role of The National Commission for Culture and the Arts (NCCA), stating that she plans to revisit its implementing rules and regulations.

Promotion should also extend to the local government units (LGUs), adding her observation that the country isn't investing enough to treat culture as an essential key to effective local governance.

Leni also aims to push for the institutionalization of artists’ welfare and protection, which is especially important during the pandemic when job losses significantly boomed, providing no ‘safety nets’ to affected creatives.

And lastly, she shares one significant takeaway: K-drama craze is known for how it perfectly captures the allure of Korean customs, showcasing it in a way that even non-locals can resonate with. For Leni, it takes a “proper and deeper appreciation of Philippine culture,” and we’re on our way to a new wave of authentic interest in Filipino-made shows and movies.