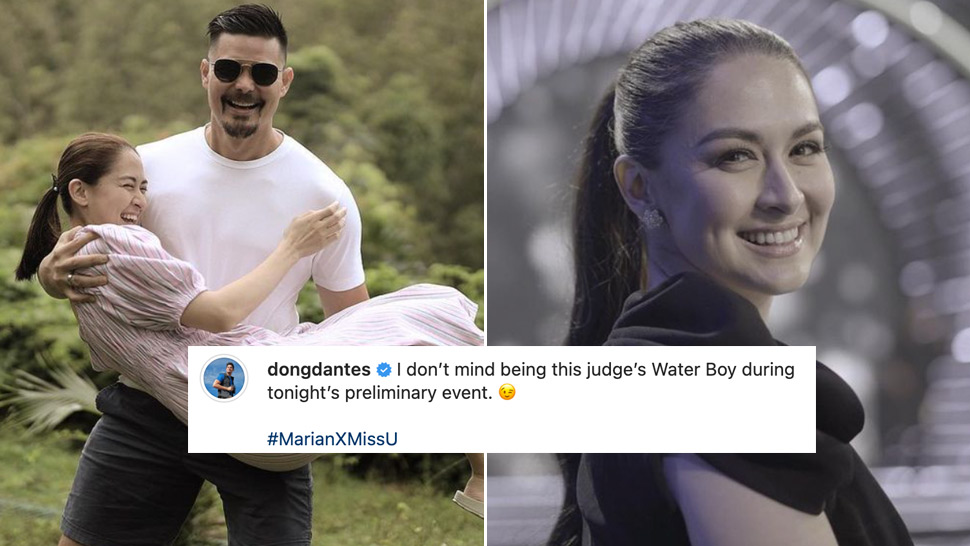 Miss India Harnaaz Sandhu may have won the Miss Universe crown, but one of the pageant's judges—aka our very own Marian Rivera—was definitely a winner, too! Not only did she almost steal the thunder with her stunning look (she wore a gown that took four days to make, FYI!), she's also been making everyone jealous thanks to all the sugary sweet IG uploads with the most heartwarming captions that her husband Dingdong Dantes has been posting in her honor.

See what we mean below:

The actor has been very supportive of Marian's stint in the international pageant since the news of her being a Miss Universe judge was first confirmed. He even quoted a lyric from the song Ikaw Ang Miss Universe ng Buhay Ko, noting how proud he is of his wife. So naturally, he also flew to Eilat, Israel together with Marian's glam team for the big event. In fact, during the preliminaries, he took it to Instagram to say that he "[doesn’t] mind being this judge’s Water Boy." LOL!

Other than being her "water boy" though, it looks like Dingdong was also more than willing to be Marian's photographer. In one of the actress' IG posts from the Miss Universe event, she tagged Dingdong in the photo credit. And since it's no secret that he's quite a skilled lensman himself, we wouldn't be surprised if it turns out that he took all of Marian's gorgeous OOTDs in Israel, too!

As Marian capped off her Miss Universe journey as a judge, the proud husband couldn't help but also repost an Instagram story celebrating his wife. The said post was a photo featuring both Marian and Miss Philippines Bea Gomez, which was uploaded by celebrity manager Tristan Cheng. His caption reads, "[Philippines] represent! Two of the crowd’s favorite! Nayanig ang Eilat sa dami ng nag cheer, humiyaw at taas noong sumisigaw ng PHILIPPINES. You made us proud @beatriceluigigmz and @marianrivera."

Is the coronation night over? Because TBH, someone still needs to give Dingdong the Most Supportive Husband Award!

On a serious note, cheers to husbands who don't get intimidated by their wives' success; rather, they support them a hundred percent. Keep at it, Dingdong!

Did You Know? Marian Rivera Brought 20 Outfits with Her to Israel for Miss Universe

Did You Know? Marian Rivera's Miss Universe 2021 Gown Took Only 4 Days to Make