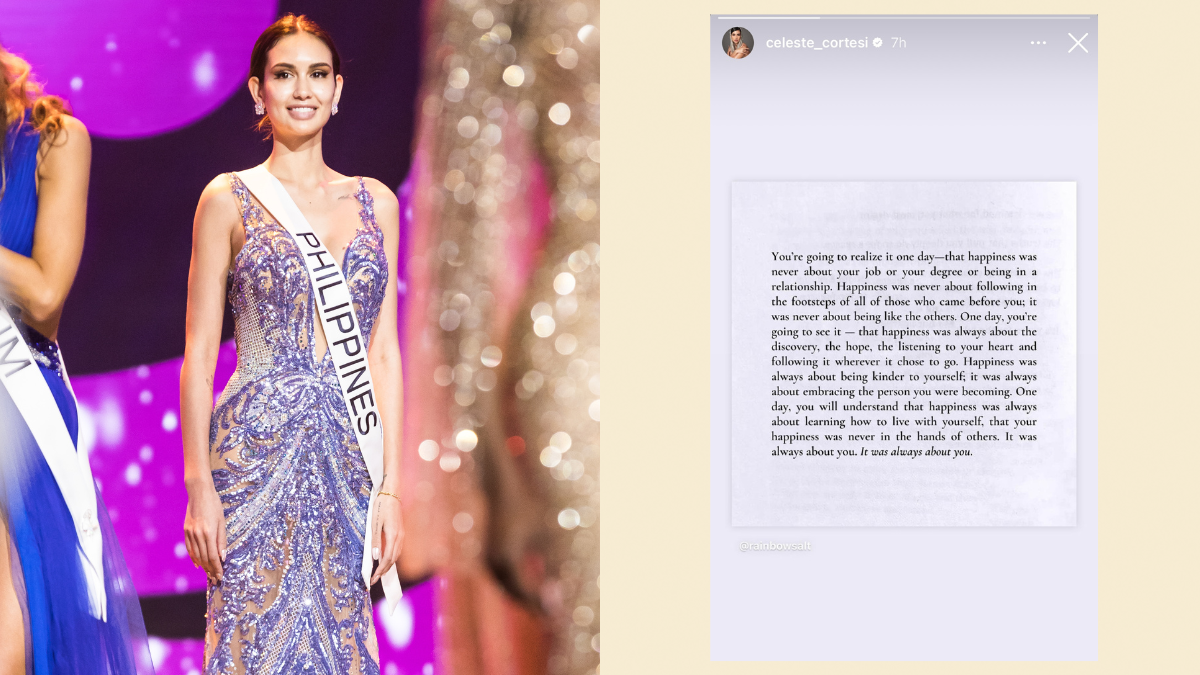 IMAGE Dion Trinidad, Instagram/celeste_cortesi
"Happiness was never about following in the footsteps of all of those who came before you; it was never about being like the others."

It appears that the entire country is still in a state of shell shock after Celeste Cortesi's early boot at Miss Universe 2022. This is, in fact, the first time the Philippines went unplaced in the pageant after a 12-year streak, initiated by Venus Raj in 2010.

Netizens have since flooded social media with their opinions, feelings, and analyses about "what went wrong." Celeste herself has also come forward with her own thoughts about the results.

News correspondent Dyan Castillejo, who was with the Miss Universe-Philippines team at New Orleans, has stuck by Celeste's side throughout the happenings. She got to engage in a brief conversation with the 25-year-old, where she declared her gratitude towards her supporters.

Dyan also got in touch with Shamcey Supsup, national director of the the Miss Universe-Philippines organization. She states that she and Celeste already got to touch base, and that she assured her that "wala syang ginawang mali, and that she shouldn't blame herself."

Meanwhile, Celeste's fellow beauty queens have also expressed their support and pride for her despite the competition's outcome. Her predecessor, Bea Gomez, shared a photo collage of the two of them and Rabiya Mateo on her Instagram account. "You worked hard and represented us well," she stated.

Our most recent Miss Universe winners, Catriona Gray and Pia Wurtzbach, also offered Celeste comforting words. "We know you gave it your all," the latter tweeted.

And we, for one, are also very proud of you, Celeste! With a crown or not, you're still a queen!

The Heated Debate on Celeste Cortesi's Darna Costume: Is It Pinoy Pride or Just a Really Bad Idea?