KC Concepcion, Heart Evangelista, and more aired their grievances against the crime. 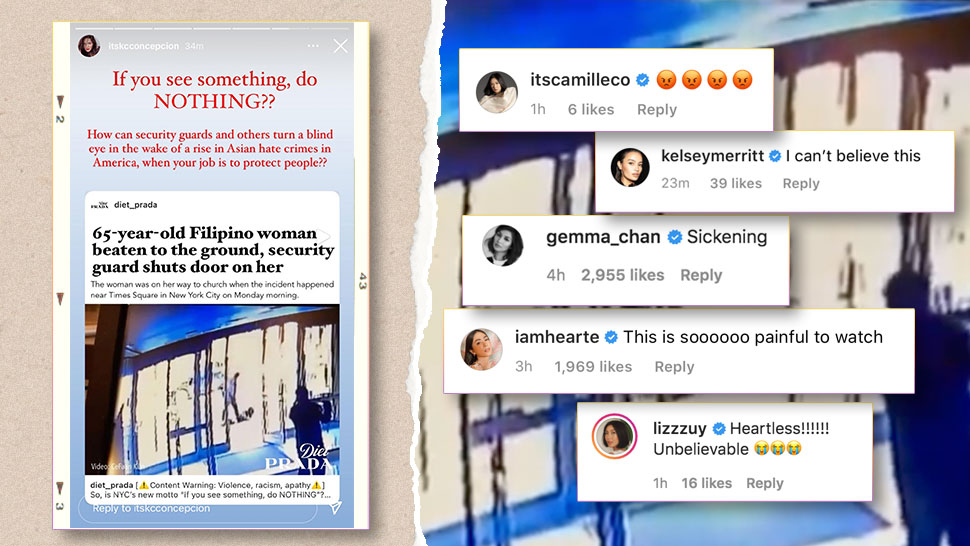 In a video posted by Instagram Diet Prada a few hours ago, a woman is seen walking in front of an apartment building and suddenly assaulted by a stranger. The CCTV footage shows the graphic yet casual act of violence the perpetrator inflicted on the 65-year-old lady, who Diet Prada identified as a Filipino woman. The crime happened somewhere in Times Square, New York.

(Trigger warning: This story contains a video clip that may be disturbing for some.)

The video, which was originally posted on Twitter, also shows how the security guards of the building shut the door on the woman who was clearly in distress. In the Instagram caption, the unnamed victim is “currently hospitalized with a swelling to the face; pain in the left leg.” The man, who assaulted the Filipina, was also heard saying, “F*** you, you don’t belong here.”

The clip has garnered more than 600,000 views on Diet Prada and 2.8 million views on CeFaan Kim's Twitter account, as of writing, and has caught the attention of local and international celebrities. Filipina actress KC Concepcion was one of the many who turned to their own Instagram account to voice out her concern and shed light on the incident.

“You think Asian hate in America solely involves the Chinese community? Think again. Apparently Filipinos are also under fire, and for NO VALID REASON AT ALL!” KC writes.

“What the hell did we do to you? Our people have migrated to America for generations and have fallen in love with your country as our own. History of Filipino-American relations speaks for itself. Why ruin it now? Filipinos continue to CONTRIBUTE to this nation, we are your loyal, highly skilled medical soldiers, we have done nothing but believe in the greatness of America from decades upon decades,” she continued.

In an article by Reportr, "The New York Police Department's Hate Crime Task Force is investigating the incident, which came as U.S. authorities moved to clamp down on racist attacks against Asians, according to ABC New York."

In a previous speech by U.S. President Joe Biden, he also condemned these "vicious hate crimes" committed against Asian Americans and called these acts "un-American" and demanded that "it must stop."