JUST IN: Jinkee Pacquiao Is One Glamorous Ninang at a Wedding Wearing Accessories Worth at Least P10 Million|Read more »
Fashion | By Nicole Cruz - Dec 31, 2022 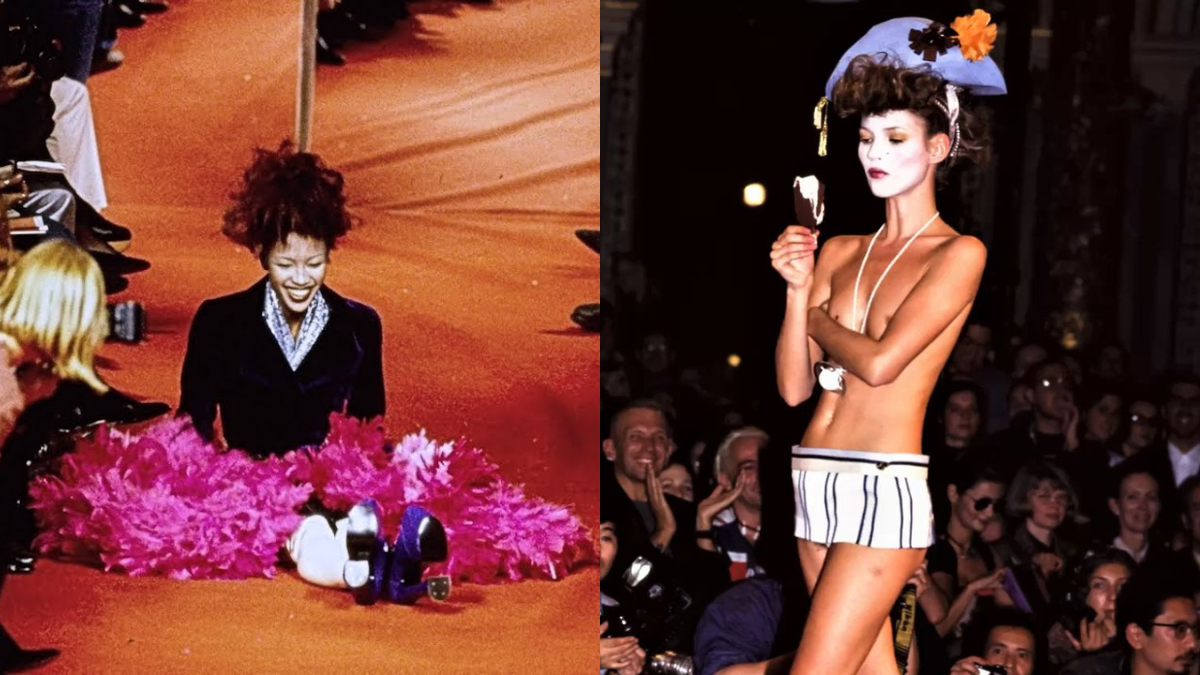 IMAGE YOUTUBE/GIOCURVE, PINTEREST/BRITISH VOGUE
The late great designer left behind a legacy that will continue to influence the industry.

The world has lost not only a design legend but a radical thinker unafraid to challenge conformities and push for political or environmental agenda through her work. She is known for blazing the trail of British punk style in the ‘70s and since then continued to transform the power of fashion. “I don’t use fashion to open people’s eyes. I use fashion as a medium to embody my ideas,” she shared with i-D in 2012. With the corsets, bustles, dandy dressing, and slogan tees, every Vivienne Westwood show was a riotous runway that celebrated freedom of expression.

Here, we highlight some of the designer’s most memorable moments in history on and off the catwalk:

1. When Naomi Campbell fell down the runway.

In the Fall/Winter 1993 show, then 23-year-old supermodel Naomi Campbell tripped on the runway wearing sky-high 9-inch platform heels. Although she laughed it off and got up to finish her walk, the tumble still made headlines the next day.

In a British Vogue video, she revealed that other designers have asked her to fake a fall to replicate the same buzz to which she replied, “absolutely not, it goes against everything that I stand for. I'm not falling purposefully”.

Vivienne Westwood had always digged deep into fashion history, often mixing English and French references in her designs, but it was in the highly provocative Fall/Winter 1994 show that featured reimagined pieces.

Titled ‘On Liberty,’ the show had bustles or butt enhancers used in the 19th century, but compared to her previous works this was reengineered for wearability. On the surface level, the show’s runway moments included a large nose ring, a fur bikini, and also a topless Kate Moss.

Speaking of Kate Moss, perhaps her first fashion core memory with Vivienne Westwood was in the Spring/Summer 1994 show.

Called ‘Cafe Society,’ the highly sensual presentation had models smoking or eating ice cream down a leopard print runway. It’s safe to say Kate Moss stole the show by licking a Magnum popsicle in nothing but a micro mini skirt (a ‘micro-crini’ or crinoline).

4. When she received her OBE knickerless.

In 1992, Westwood was honored with an OBE (Order of the British Empire) by Queen Elizabeth II at the Buckingham Palace. The designer attended the ceremony wearing a gray skirt suit set–sans the underwear! “I wished to show off my outfit by twirling the skirt. It did not occur to me that, as the photographers were practically on their knees, the result would be more glamorous than I expected,” she later on shared.

Her photographs were splashed on papers everywhere. “I heard that the picture amused the Queen.” OBE honors are given to individuals who have made significant contributions in culture and the arts.

5. When she shaved her head for the planet.

Westwood was always outspoken about her call for environmental action, be it through her designs or in speeches at public events, but in 2014 she chose another way to do so. During a South London protest, the designer surprised everyone by revealing a shaved head, completely chopping off her trademark fiery red locks.

“Vivienne cut her hair as we must all wake up to climate change. And secondly, as she wanted to cut the red out for a while and have it white- to show she’s proud of her age,” her publicist later on explained.

Men in feather skirts and lame gowns. Women in oversized blazers and matching trousers. Although Westwood had always dressed her male models in girlish pieces, Vogue posits that the F/W 2015 show, titled ‘Unisex’,’ was arguably one of the first to solidify genderless dressing into the mainstream.

“A dress can work for both because there is both in us, masculine and feminine,” Andreas Kronthaler told Elle. He was Westwood’s husband and design partner.

7. All her activist moments.

From creating splashy slogan shirts to getting naked for PETA, every time Vivienne Westwood took a stance she always drew attention.

On the runway, she is remembered for her “I am not a terrorist, please don’t arrest me” tees from S/S 2006, signages demanding fair legal trials for Guantanamo Bay prisoners in F/W 2008, and her outright call for Climate Revolution in S/S 2013. She also expressed her views on Brexit and other political issues throughout the years.