You voted for your favorites and here are the winners! 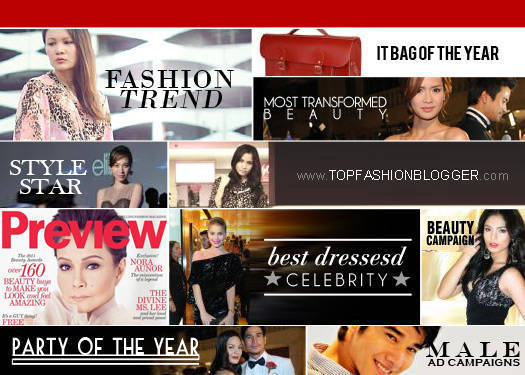 Every January, we like to look back on the highlights of the year that was—the names, trends, events, and campaigns that got us all buzzing. 2011 certainly wasn’t lacking in color and we’re so happy that many of you took time out to vote and tell us what made your year.

We’re happy to announce that the Best of 2011, according to this year’s polls, are the following:

Isn’t it great to look back on all 11 Preview covers for 2011? Nora Aunor’s brilliant transformation for the glossy’s November issue came out the favorite!

Voting for the week’s Style Star has become a regular habit and the overall winner for the year comes as no surprise. Divine Lee has come out as the winning name in the weekly polls of 2011 so she’s more than deserving of the title.

Celebrity style has become huge in the country as we all look forward to seeing what our favorites will wear next. Anne Curtis, who herself had a very busy 2011, was voted as the year’s best dressed.

It Bag of the Year

Really, it was these two new bag styles that people were hankering for in 2011—the Celine Luggage and the Cambridge Satchel. The latter, which was locally available and had a friendlier price tag, won out over the luxury bag in this category.

If there ever was a year when blogging about fashion became a true career in the country it was 2011. Shai Lagarde, who co-writes her Tumblr blog “Love Chic” with beau Seph Cham, got the top spot.

We always sit up and take notice when a woman comes into her own and steps into the spotlight. It was “Maria del Barrio” star Erich Gonzalez that topped readers’ list as the most transformed in 2011.

Every year, we love observing which trends people have latched on to and the different ways they interpret the look. It seems Animal Prints reigned supreme still winning out against the Sheer Maxi Skirt and Deep V neckline.

Beautiful female faces, and their new and improved bodies in some cases, endorsed the newest products and treatments the beauty industry had to offer. Lovi Poe’s sexy ad for Belo was the poll favorite!

Party of the Year

There were balls and parties galore and the women of the metro seemed happy for an excuse to get all dressed up. The Star Magic Ball topped the polls as the favorite party gallery to browse in 2011 with the Preview Best Dressed Ball coming up in second place.

We saw men, men, and more men fronting the ad campaigns and billboards of retail brands in 2011 and they were received with open arms. Thai cutie Mario Maurer’s billboard for Penshoppe bested the 4 other nominees with a whopping 100,353 votes!