WATCH: Sassa Gurl Shows Us How to Achieve Her Signature "Hotdog" Blush|Read more »
Fashion | By Isha Valles - May 11, 2020

She was a big proponent of the local industry. 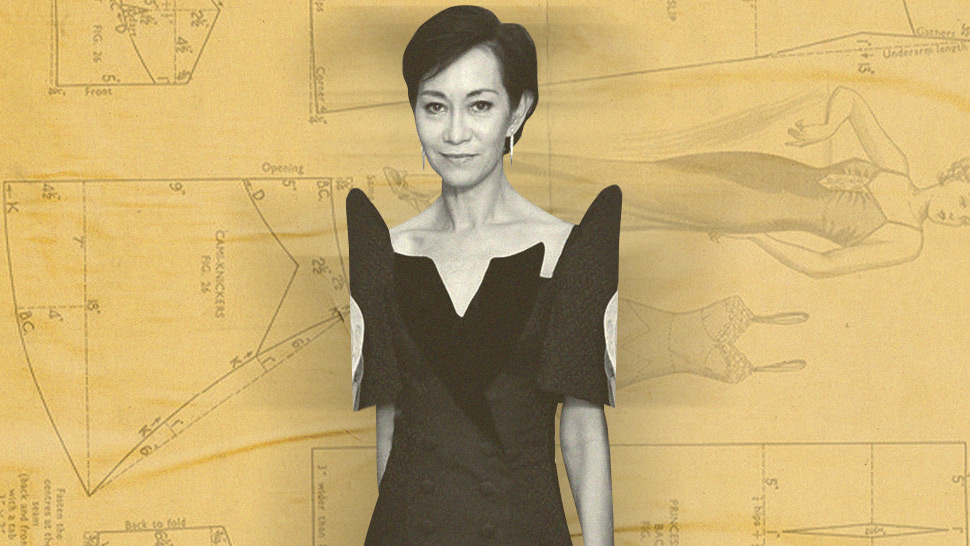 The fashion industry has lost one of its champions. Sandy Higgins, co-director of Slim’s Fashion and Arts School, passed away yesterday after privately battling an illness for 2 years. The school is widely known for its notable alumni that includes Joe Salazar, Cesar Gaupo, Michael Cinco, Joey Samson, Martin Bautista, Jaz Cerezo, Albert Andrada, Ezra Santos, and Milka Quin to name a few.

Sandy was the daughter of one of the country’s revered fashion designers, Salvacion Lim Higgins, who was best known by her monicker, Slim’s. Together with her brother Mark, she kept their mother’s legacy alive by chronicling the history of her works, and with the astute way with which she ran the school.

Fostering the Future of Fashion Design

Under her watchful and discerning eye, students developed the keen technical skills needed to construct garments to the standards that Slim herself abided. The proper way to make the terno’s butterfly sleeve, for example, or the elaborate way fabric is draped to avoid having to use too many seams were among the techniques she prided in their undergraduates.

Sandy was well-versed with the unique skills of each of their students, and was always ready to regale one with the story behind a garment at the annual students’ graduation exhibit. Apart from the creative inspiration, she would run through the processes their pupils went through in producing their works—how old CDs were shattered and used for the mirrored embellishments, how fabric had been hand-dyed, or how a bodice had been reconstructed several times until its creator was satisfied. The detailed accounts she gave only revealed how closely she observed and worked with each one.

Her gracious manner and intelligent candor allowed her to harness relationships with the media, stylists, celebrities, and various members of the fashion industry. This helped land their students’ works in the pages of magazines, exhibits in various spaces, and on the backs of high-profile clients.

During the 2015 launch of the Bench-produced coffee table book Fashionable Filipinas: An Evolution of the Philippine National Dress in Photographs, 1860-1960, the precedent for the biennial Ternocon, Slim’s students and alumni found their ternos worn by celebrities like Solenn Heussaff, Liz Uy, Sarah Lahbati, and Karylle. She proudly displayed each of these at the school weeks after, and photos peppered press pages.

In 2015, when Preview donated the proceeds from the sales of lipsticks created for its 20th anniversary to support the education of a Slim’s scholar, Sandy shared about the concerns that a number of their enrollees experience. She revealed, at the time, that the reason why the school’s courses were broken down into modules with flexible schedules was to create a program for students with financial limitations. They could study part-time and build their skills in traunches.

The Salvacion Lim Higgins Education fund in 2017  was launched at that year’s graduation exhibit to formalize the assistance that can be given to truly gifted individuals. In an interview with CNN, she says, “The reason we call it a fund is because we’d like to build the fund so that it can sustain. I think a lot of times, things begin and then they can’t be sustained, and we’d like to build the funds so that we’re sure that we can help students over the next couple of years.”]

A Wardrobe of Slim’s Student and Alumni Creations

Beyond just playing the role of teacher and school director, Sandy was also a muse and mannequin to the school’s talent pool. Nina Gatan, a Slim's scholar and graduate writes, “You will always be my first muse. We will miss you in your androgynous Joey Samson polos, your ubiquitous brogues walking around the hallways of our school.”

Joey Samson also shares that she was “always proudly supporting and wearing clothes by the designer alumni of Slim’s. It’s every designer’s dream to dress someone like her—she was always very trusting.” Sandy would give him carte blanche and tell him to just make her something when an idea comes to mind.

A Custodian of Philippine Fashion History

Sandy and Mark were a formidable team, and another role they performed well together was that of fashion historians to the artistic prowess of their mother. Former Preview Editor-in-Chief Pauline Juan, who worked closely with Sandy on several projects with the magazine, shared this:

“There are very few people who have as fervent a commitment to excellence than Sandy Higgins. I first met her when she and her brother Mark were putting together the book SLIM: Philippine Haute Couture 1947-1990 to celebrate the 50th anniversary of the fashion school named also after their legendary fashion designer mother. Mark was the creative and Sandy, the producer, and together, for this undertaking and so many others they staged, they were an indomitable 2-man project team.

I’ve always admired Sandy for the clarity and depth of her vision. She always knew exactly the reasons why she was doing an exhibition, for example, or why she stuck to her workout regimen, and she certainly knew how to get the outcome she wanted. If she and Mark couldn’t will the results, they worked the best of the best out there—and I’ve never come across anyone who gave less than 100% when they signed on a project with Sandy; I think this is because Sandy has always been great at communicating purpose.”

Preview had the pleasure of documenting a series of events in 2009: from the launch of the book, to a costume exhibit of the works of Salvacion Lim Higgins at the National Museum. These were immortalized on the cover of the magazine’s 2009 issue with Anne Curtis donning a number of the couturier’s beautiful gowns.

Preview has since documented the various exhibits of Slim’s creations, the most recent of which was held at this year’s Ternocon last February, as well as the graduation exhibits that in recent years were held at the SM Mega Fashion Hall.

Sandy was a fashion force that the Philippine fashion industry needed and certainly benefitted from greatly. Those who were fortunate enough to have spent time with her will nod in agreement to Pauline’s words:

“I will miss these conversations with her—the smirk that comes with her dry humor, her fierce intelligence. She was one of those people gifted with great insight, and after talking to her (even on just text message!) I always walked away enlightened.”

Tune Into This Fashion Industry Talk Hosted By Manila Fame