The train alone was 30 meters long. 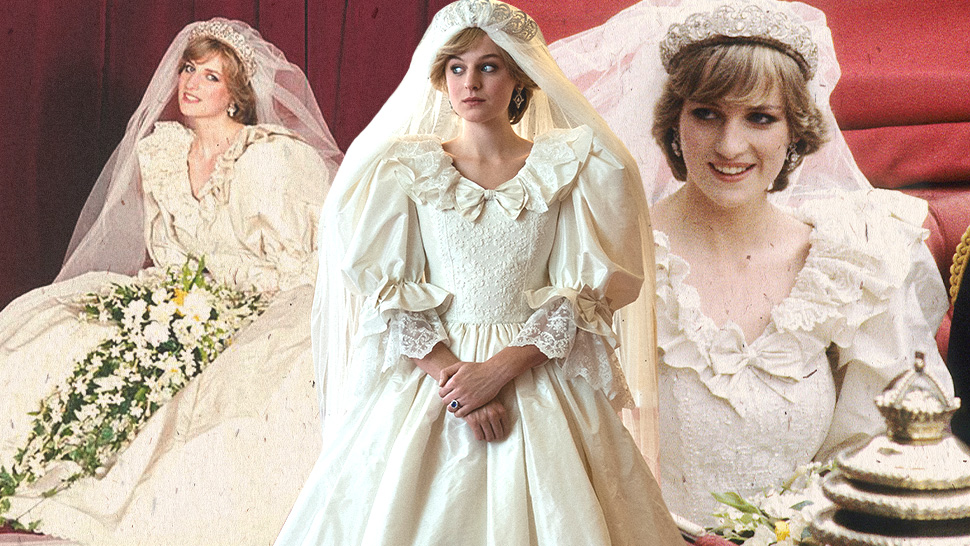 The Crown’s much-awaited season 4 finally hit Netflix and if you haven’t started streaming it, why not? The show is an impeccable showcase of gorgeous cinematography, sound design and score, dialogue, and a dream cast that never seems to disappoint. Having said that, we all know why this particular season will pique the interest of many: the introduction of Princess Diana.

It’s an understatement to say that 24-year-old actress Emma Corrin is perfect for the role. She’s charming, engaging, and as beautiful as we had hoped for as The Crown’s blonde and blue-eyed People’s Princess. One event everyone hopes to see in the show is obviously her wedding to the Prince of Wales, and her over-the-top fairytale-like wedding dress that is undeniably one of the most iconic bridal gowns of all time.

In an interview with Preview, The Crown costume designer Amy Roberts revealed that they worked closely with the designers of Diana’s original wedding dress Elizabeth Emanuel. “We were really lucky because David Emmanuel, you know, one of the designers of the dress with Elizabeth his wife, agreed to come and meet us,” Amy tells Preview.

"The Crown costume designer wanted to create something that wasn’t an exact replica of Lady Diana’s original dress but which captured the same spirit and style of David & Elizabeth Emanuel’s iconic design. Amy Roberts, our designer, spoke to David Emanuel in depth about the Emanuels' original sketches and designs. He was fantastically collaborative and helpful to the design team and talked through the detail of many of the original drawings,'" according to Netflix.

“That was just incredible. Because I just was concerned about the color of the dress. It's quite difficult [to get it right] isn't it? You look at photographs and [the dress looks] slightly different in every [photograph] you look at. So we selected all this lovely beautiful silk taffetas, and the first thing I said to David, “What color?” And he just said, “That one!” And so we kind of kickstarted with the right color, and the weight [of the fabric]. And he was just so generous. And he just said just get on with it. He was, he was just very open about it just gave it to us. So his attitude was “Get on with it and enjoy it!”

According to Amy, it wasn’t entirely about accuracy, but giving the viewer this sort of nostalgic trip once the dress appears on screen. “I think it was important that it wasn’t just an absolute spot on copy. I’m not in the job to do that. The big thing was to give you, the audience, the sensation of that dress—all your memories of that amazing dress.”

In a tweet by Netflix UK, it took four months to make “with three people spending a collective 600 hours working.” To sum it up, the iconic ivory ball gown is “made of 95 meters of fabric and 100 meters of lace, with a train that is approximately 30 meters long.”

Emma (who plays Diana) also mentioned in an interview with Town & Country that everyone fell silent the moment she put the dress on and said, “More than anything else I wear in the series, it’s so … It’s her." In that same interview, it was reported that it took about 10 people to help Emma into the dress because of its massive size.

The Crown season 4 is currently streaming on Netflix.