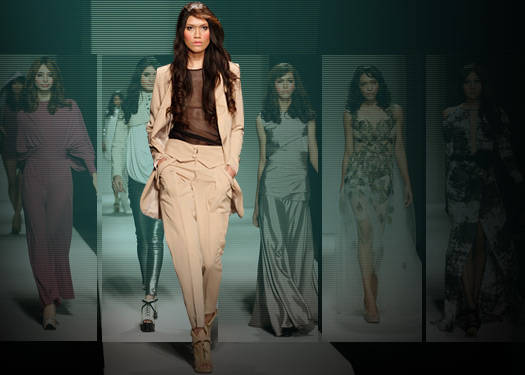 The concept of "luxewear" is a fairly easy one to grasp, we believe. From a segment in Philippine Fashion Week Spring/Summer 2012, one could, very well within reason, expect to see the best interpretations and renditions of luxurious clothing from the participating designers.

Imagine the surprise of the audience then, when tilapia (or was it bangus?), twine, and all sorts of farm animals and produce made their way onto the catwalk, conspicuously adorning droll canvases of safari print dresses netted with local weaves. In what realm does such a collection beget inclusion in a fashion show segment entitled "luxewear"? Luxe for the agrarian- and fisher-folk inspiration of the designer, perhaps, but what of his discerning audience?

Or what about another designer's take on the circus ringmaster? Another caricature fetishized for a spectacle on the runway. We understand as fiercely as anyone an artist's desire to let his/her creative juices flow, but, please, pushing boundaries of taste isn't a boundless, thoughtless mission designed only to attract attention.

And as could only be expected from such a showing, there was a proliferation of leg, boob, and crotch reveals from several designers, some of whom sought to temper their muses' immodesty with yards upon yards of skirting fabric (which would've somewhat served their purpose, if only the material weren't sheer). More than ever, the absence of elegance and tastefulness in "luxewear" became painfully obvious.

All was not lost, however. Like beacons of almost blinding light, a few names stood out in the show, to which we clung onto with the fierce determination of the lost not wanting to be pulled back into the abysmal realm of the lost-in-imagination. There was Anthony Ramirez, whose frothy, prettily embellished (albeit risqué) dresses offered refreshing alternatives to the heavy, bead-encrusted evening gowns we're so used to seeing; Julius Tarog, who took androgynous dressing to neutral but not unexciting heights; Ronaldo Arnaldo, whose ever-precise tailoring took on a fresh turn this season; Tina Daniac, whose sequined gowns (again, sheer) both beget and incite lust; and lastly, Yvonne Quisumbing, whose lovely creations hearkened to the dark side despite the summer target season.

Click on the following links to view the designers' Spring/Summer 2012 collections: