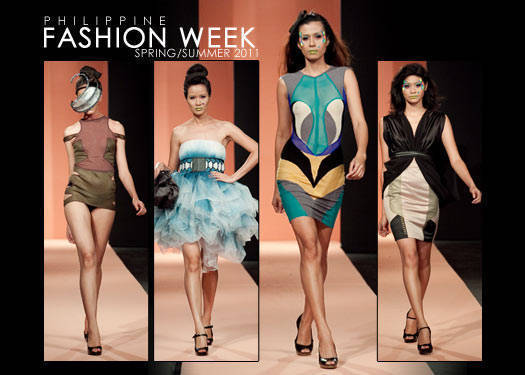 There were visions, and there were trends, alright, in the Visions & Trends show of Philippine Fashion Week Spring/Summer 2011. As with the Design Fusion designers, the talents who participated in this lineup eschewed predictable summery maneuvers for more avant-garde and kitschy gambits.

Anthony Cesar Ramirez, whose last collection was proclaimed by Preview as one of the best among the PFW Holiday 2010 shows, envisioned a "summer in Mars" for his latest Fashion Week outing.

What would a sexy, green-lipped Martian wear in the throes of summer in the fourth planet from the sun? A red paneled bodysuit with a chiffon cape, perhaps? Or a selection of party-length numbers in carmine or olive with piping and cutouts?

The sci-fi sartorial imaginings are endless. One look stood out the most, though, for its real-life practicality and structural charm: a symmetrically paneled floor-length gown in hues of olive, blue gray, and mint cream, with emphatic peach piping.

On a styling note, perhaps these teeny-tinies would best be worn over very opaque tights, a full body suit, or micro shorts unless you're bold enough to pull a Lady Gaga and hit the town with your skivvies on display. You could also just request for it to be made just a tad longer for maximum wearability.

Donn Delantar was supposedly inspired by minimalism for his spring/summer 2011 collection, but his clothes prove otherwise. Using shiny, synthetic fabrics in orange and black peppered with square appliqués and mesh sections, his garments for both men and women could not be more disconnected from their minimalist inspiration.

It would do well for this designer to review the oeuvre of Jil Sander and Helmut Lang—the ultimate mistress and master of minimalist fashion. Or perhaps the motive to his designs should have instead been worded as a play on geometry and color-blocking.

That being said, it's nice to see that his latest outing is more cohesive than his fragmented last.

To Market We Go