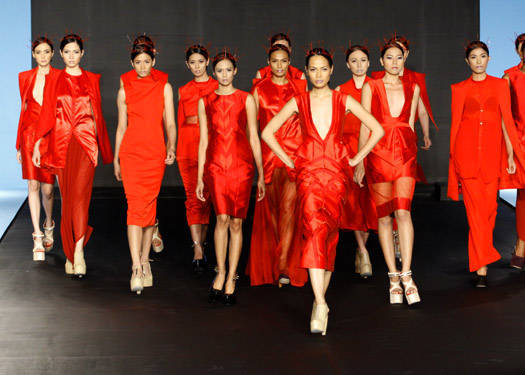 The second day of Philippine Fashion Week Holiday 2012 kicked off with the Premiere A segment, showcasing the collections of five designers: Dimple Lim, Jeffrey Rogador, Odelon Simpao, Roland Lirio, and Xernan Orticio, who took us on a journey from the disco to a cosmic terrain, a milky knitland back to the club, all the way to a crimson outing referencing biblical persecution. Find out how:

Dimple's Fashion Week ticket carried no specific destination, so we weren't certain where she was taking us, exactly. Was it back to the disco era with her fiery sequined pants and dresses and lamé drapings, a pleather-inclined Gotham with her pleather-and-mesh ensembles (whose geometric cuts are vaguely reminiscent of Veejay Floresca's Spring/Summer 2011 collection), or to an extraterrestrial domain where cord-loving glamazons rule? We're not quite sure, so you decide.

Ah, Jeffrey: the man responsible for making Jolina Magdangal the '90s icon that she was. There was something so clean and so inviting in his collection. Dubbed Glass of Milk (for which profound reason we cannot ascertain, except for the obvious—the creamy palette of the pieces, duh), the 30-outfit collection served up some sensible, super wearable pieces for both men and women, as well as some runway-appropriate ensembles that are, well, a bit less sensible, but interesting nonetheless. Glass also foreshadowed a trend we hope to see come June: see-through plastic garments that are too cute and functional enough to keep the drizzle off your fab outfits (for more, see Louis Claparols' cutesy pieces for the SM Parisian show). In the meantime, join Jeffrey and take a gulp...

Click here to see his collection. (Don't forget to take note of the accessories and footwear!)

Metal harnesses. Lurex sleeves. More metal embellishment. It was pretty clear what end of the matte-shiny spectrum Odelon was leaning to. In these shiny things, points of attraction found themselves in otherwise simple clothes: body-con dresses, slinky evening gowns, strapless cocktail dresses, and all sorts of pieces for men.

It was alright until the finale, where Danica Magpantay waltzed onto the runway in an Elie Saab-esque confection, which amplified all the frou-frou that heretofore had passed us. Some feathery, sequined embellishments crept their way down across a model's torso, a diagonal vines of sorts; some modestly trailed up and down a model's chest to cover the important parts; some grew on faux fur. But then again we've always known Roland as someone fearless of ornamentation.

And here, the crowning glory of Premiere A. This PEFTA alum brought the house down with a crimson collection that was—excuse the pun—bloody good. Xernan brought back the sharp execution that we've seen from him since day one, by way of the unconventional and impeccably tailored dresses and skirtsuits that have fast become his signature pieces. Thorn-crowned model after spike-crowned model, Xernan showed us what he does best, with bare decollétages, flashes of leg, and exposed midriffs sexy-fying his tailored looks. Notable also was the first-ever Holiday 2012 appearance of the reverse mullet, which Xernan tweeted was inspired by our very own Anna "Modesty What?" Canlas.

For live updates on Philippine Fashion Week Holiday 2012 straight from the front row, follow us on Twitter: @StyleBiblePH and @previewmag! 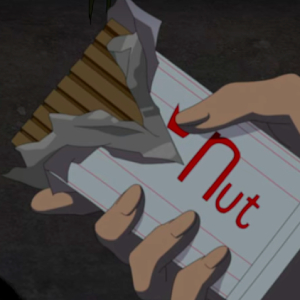 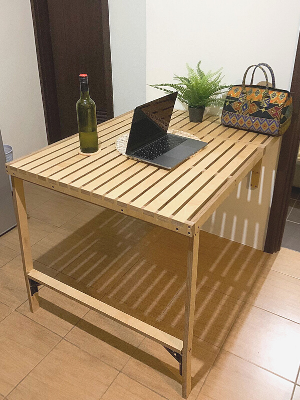