LOOK: Julia Barretto Is Ready for Mature Roles, Which Means Living Life on Her Own Terms|Read more »
Fashion | By Jae Pickrell - Jun 9, 2011

Anatomy, clothing surprise, and thought bubbles—some of the components that make up Premiere C. 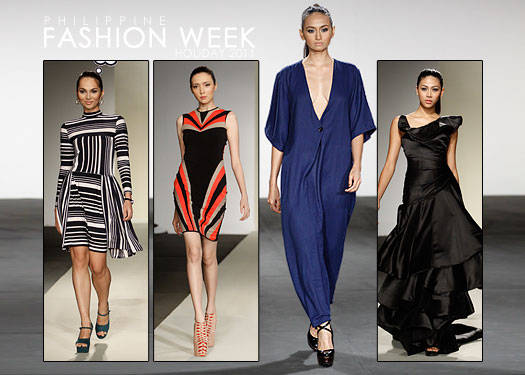 The Premiere C segment of Philippine Fashion Week Holiday 2011 went off without a hitch on the very last day, with some expected showings and quite an awesome surprise to cap it off. Derick Hibaler, Jeffrey Rogador, Kermit Tesoro, Raoul Ramirez, and Yako Reyes all showed 30+ looks each, presenting their respective strengths and a pleasantly surprising talent we've never seen before.

This menswear designer churned out casual menswear pieces with a playful streak. Pairing jeans and printed long-sleeved button-downs with detail-driven jackets (lined-through lapels, differently colored pocket flaps), Derick seems to be a new contender for the menswear department, easily giving similarly playful guys like Ulysses King and Jess Capuchino (and perhaps his succeeding designer, Jeffrey Rogador, too) a run for their money.

Boys, take a styling tip from this show: Never be afraid to pair your sportcoats with jeans and button-downs for an casual-yet-dashing, instantly put-together look.

Jeffrey is not one to shy away from stark, popping details in his shows (he stuck grass as verdant accents in his models' shoes for his Holiday 2010 collection), so it came as no surprise that he would do something catchier this time around. His models came down the runway with thought bubbles bobbing on top of their heads, which took a bit of attention away from the garments, as the audience wondered what funny little saying would be scrawled in the next bubble instead of focusing solely on the ensembles.

That said, the looks had a decidedly pop feel to them. Closet staples of sportcoats, trousers, shorts and skirts were punctuated with geometric details as per Jeffrey's trademark. There is a lot more color play in this outing, too, than in seasons past, which only makes sense per the collection's pop inspiration.

Arguably one of the anticipated designers in the Premiere C segment, Kermit did not disappoint in doling out an avant-garde spectacle. Called Anatomy, the collection is a direct progression of his Holiday 2010 collection, where he showed his fascination with the skeletal system. This season, he's going one layer up and focusing on the muscular system, showcasing muscles, sinews, and nerves via fabric paneling, cutouts, and lifelike approximations on vests, bustiers, and bodices. The vertiginous heels are his own, too: some of them feature the same muscular simulations on the vamp and the heel, with some sharp heels heartened—literally—via small reproductions of the heart, which takes the place of the skulls in his other sky-high stompers.

Raoul showed a less atypical collection, leaning instead towards evening glamour in a monochromatic palette dashed with a bit of pink for softness and distinct femininity. Raoul toyed mainly with textures of lace, feathers, satin, chiffon and suiting wool for his dramatic designs for both men and women. A standout is this lovely silver and baby pink bustier dress, whose softness breaks the high drama of the entire collection.

Yako had us agog when he presented an almost bag-less collection, which was not what we were expecting given that we were acquainted with him as a bag designer. But it was all a turn for the better as Yako held his own, presenting worthy ensembles of oversized crop tops paired with slitted parachute skirts, simple shifts in deep sapphire, kaftans and sleeveless bubble dresses in maroon and the staple black. The Preview and StyleBible.PH editors were quite impressed with this outing that we all rushed backstage after the show to have a closer look at the pieces, and we were lucky enough to snap up the sample sizes.