SHOP: The Preview Beauty Bag Is Officially Here and It's the Ultimate Steal|Read more »
Fashion | By Jae Pickrell - May 16, 2011

Evolution and quixotic treatments for the closing show of Day 2 of Philippine Fashion Week. 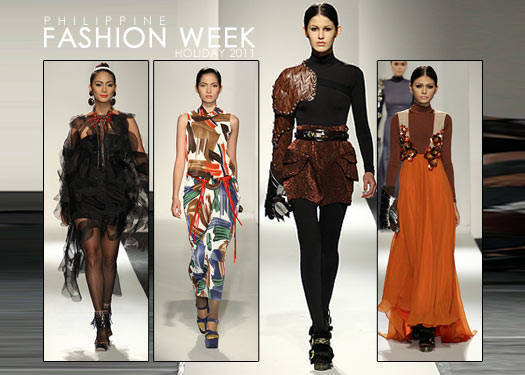 There is a definite evolution of design and execution from Arnold Galang in his recent PFW outings, starting with his collection for Holiday 2010. While he showed a colorful but almost cacophonous collection for Holiday 2010 (a hodgepodge of prints, textures, and materials), and a darker assortment of wearable garments for Spring/Summer 2011, his current collection is a step above and beyond what we've seen from him so far.

There are several motifs that run through the whole collection, but it is otherwise cohesive and well-thought out without being contrived. It started off with both fiery and bright Asian motifs, breaking with multicolored brush stroke prints, and finally peaking with sleek neo-tribal pieces. Arnold clearly tempered his ideas and execution so as not to focus on showing all that he can do, but what he can do well—both classic and urban silhouettes in colorful materials and persuasions that are neither overwhelming nor boring, but tasteful, engaging, and most importantly, covetable.

So aside from the odd finale of a bearded (but beautifully clad) Marina Benipayo, Chris's collection held our attention as his Holiday 2011 outing was a distinct departure from his regular romantic inclinations. Inspired by the female saint Wilgefortis, the collection is Chris's futuristic take on medieval opulence and mystique. The styling made his segment a spectacle, and a riveting one at that where our eyes feasted on an amalgam of elements that worked in symphony to relay Chris's current state of mind and design. Half the fun of watching the collection (or seeing it online) is breaking down the looks to figure out how the pieces would work off-runway. Taken a piece at a time, each garment is distinctly Chris: figure flattering, womanly, and sexy—and yes, still quite romantic, but not as obvious as before, this time.

As per usual, Gerry turned out a diverse mix of textures and treatments for his latest outing. As we've seen in seasons past, Gerry favors an eclecticism when it comes to prints and color, and it seems that this current collection of both mens- and womenswear is also indiscriminate when it comes to silhouettes, at least when compared to his last two seasons where specific styles dominated his runways. But if anything, the lineup is representative of Gerry's quixotic aesthetic in terms of the pell-mell textures, hues, and fabrics that he used.