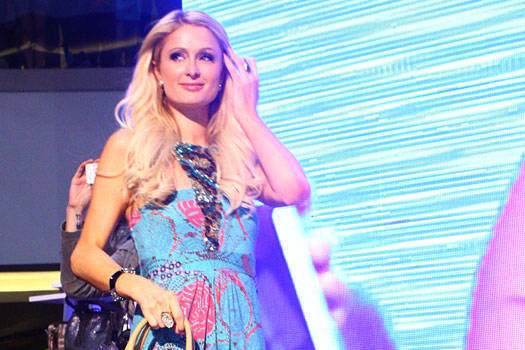 Paris Hilton made headlines during her 5-day visit to Manila. The hotel heiress and business woman was here to design a beach club for Century Properties development Azure as well as visit the boutique of her eponymous bag line in SM Megamall.

What especially got people buzzing on social networking sites were posts from three designers—Eric delos Santos, Rosanna Ocampo, and Martin Bautista—who excitedly shared that Paris Hilton wore their designs for the campaign shoots for Azure. Bea Constantino, Paris' stylist here in Manila, was the one who got in touch with the designers, she had pegs and excitedly worked with the three.

We got to chat with Eric after finding out that Paris wore one of his creations and he couldn't have been happier. He was asked to make two pieces for her and she wore one for her TV shoot. The designer let us in on a little secret; the fabric he used was actually reserved for his Spring/Summer 2012 collection.

Meanwhile, Rosanna Ocampo was thrilled when she saw Century’s post of Paris wearing her Rio Carnival jumpsuit for that day’s photo shoot. She had sent 3 outfits for and two of them were used. The lucky designer was able to meet the reality TV star at a party hosted by the real estate group.

Martin Bautista took to his blog the moment photos of the blonde bombshell in his dress were posted online saying, “Thanks to Bea Constantino for tapping me in this project. Thanks B!”

Paris’ itinerary also included meeting her fans at a visit to her store in SM Megamall and dinner with the royal couple of Philippine boxing, Sarangani Rep. Manny Pacquiao and his wife Jinkee . We were plenty happy to stalk her style as photos emerged online.

Click on the photo gallery to check out what Paris Hilton wore while she was in Manila! 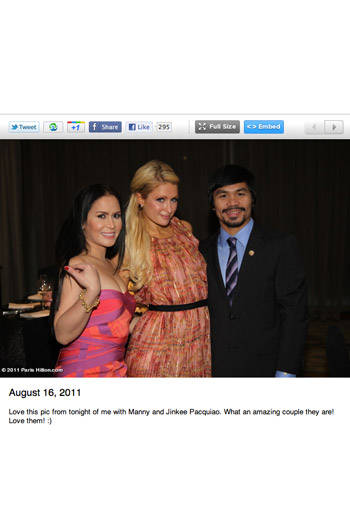