SHOP: The Preview Beauty Bag Is Officially Here and It's the Ultimate Steal|Read more »
Fashion | By Isha Andaya-Valles - Aug 3, 2009

Does Pitoy Moreno deserve the award and is fashion design a legitimate art? 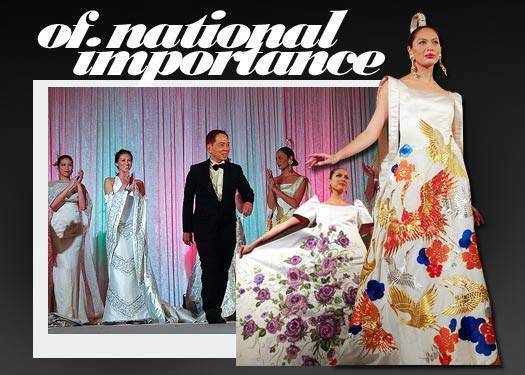 There's a bit of a storm brewing since this year's list of National Artists was announced last July 29, 2009, before President Gloria Macapagal-Arroyo left for her trip to the United States. Much of the buzz surrounds the awarding of film director Carlo J. Caparas (visual arts and films) and National Commission for Culture and the Arts (NCCA) executive director Cecille Guidote-Alvarez (theater).

However, this year's honoree in the field of Fashion Design, Jose “Pitoy” Moreno (who is the second designer to receive the prestigious award after the late Ramon Valera), has not escaped the raised brows of the art community. The rumor mills attribute his awarding as a result of having "friends in high places," with others questioning his legitimacy as a true artist.

Early in his career as a designer, Pitoy designed the costumes for the Bayanihan Philippine Dance Company, which began a lifelong design slant heavily influenced by Philippine customs and culture. He was one of the earliest couturiers to promote the Maria Clara, taking his inspiration from the renderings of famous Filipino artists like Damian Domingo, Fabian dela Rosa, Juan Luna, and Felix Resurreccion Hidalgo (Source: http://showcase.eyp.ph/pitoymoreno/).

While he has not released a collection in recent years, seemingly focusing on custom-made pieces for select clients instead, Pitoy celebrated his golden year in fashion last 2004 with a grand gala, "Ginintuang Sining: Golden Years of the Art and Life of Moreno", held at the Cultural Center of the Philippines (CCP) (Source: http://showcase.eyp.ph/pitoymoreno/). The event was organized as a fund-raiser with the proceeds donated to support young artists, Gawad Kalinga, and numerous other charities (Source: "Moreno on Moreno," Moreno, June 2009, Philippine Daily Inquirer).

In other news, the newly included award categories are being questioned, Fashion Design included. Ben Cabrera, 2006 National Artist awardee for painting, was quoted in an exclusive interview with Spot.ph saying “Now everybody can be a National Artist. They keep adding categories: Landscape Art, Fashion Design, what's next, hairdressers? They should stick to the seven arts: Music, Dance, Theater, Visual Arts, Literature, Film and Broadcast Arts, and Architecture and Allied Arts.”

Click here to read more about this on Spot.ph and find out the criteria involved in choosing a National Artist Awardee.

Do you think that designer Pitoy Moreno deserves the honor of being named a National Artist? Click here to take the poll and tell us what you think.