Care for a diamond-encrusted Birkin, anyone? 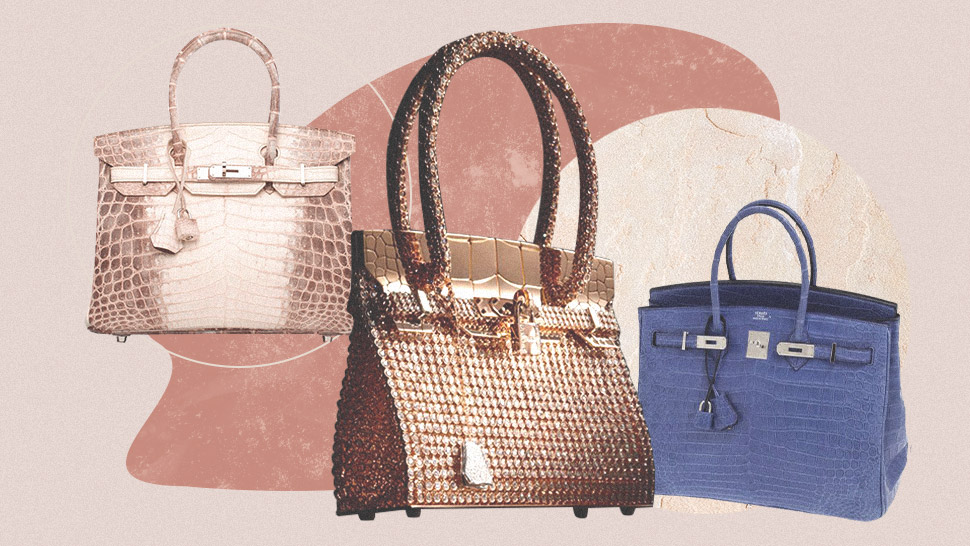 When it comes to handbags, one designer brand is top of mind: Hermès. Perhaps it’s because of the fashion house’s elusive Birkin, which has garnered a cult following among fashionistas for its out-of-this-world quality and equally exorbitant price tags.

Over the years, Hermès continues to push the boundaries of what a luxury handbag can be through various interpretations of the Birkin, each one using different materials, fine hardware, but still retaining that covetable appeal. So lust-worthy are these lavish handbags that they can fetch up to more than six digits at auction houses, often making history as “one of the most expensive bags ever sold”—until someone else buys one at an even higher price.

To pander our curiosity, we’ve rounded up the most expensive Hermès bags ever produced (and sold) in history, and it includes more than just the Birkin.

Landing the 10th spot on this list is this Brighton Blue Porosus Birkin. Although it isn’t sprinkled with diamonds like its more expensive contenders, it does feature silvery white palladium hardware for a sleek and discreet finish. No wonder it fetched $113,525 at an auction back in 2011.

It’s not uncommon for Hermès bags to be sold at auctions. In fact, it only seems fitting, what with their art-like quality, rarity, and ever-increasing value. One bag of such caliber that was sold at an auction is a metallic bronze chèvre leather Hermès Birkin bag, which went under the gavel for $117,000 at a Christie’s auction in 2017.

In June of 2017, When a dark blue crocodile Hermès Birkin was sold for £125,000 at a Christie’s auction, it became the most expensive bag ever sold in Europe. And, it’s no wonder, too: The bag is outfitted with gold and encrusted with 18-carat diamonds. It was the auction house’s first-ever handbag-only sale in London, and millions of euros were splashed out for the affair.

Aside from the luxurious leather, part of what makes a Birkin so alluring are the divine colors. Back in 2011, a blood-red Birkin was sold at an auction in Dallas, Texas for $203,150, quickly becoming the most expensive back ever sold (but not for long). It dazzles with 18-karat white gold hardware studded with diamonds.

Back in 2016, a pretty pink Hermès Birkin was auctioned off for $222,000. The crocodile leather-crafted piece is decked out in dyed candy pink and decked out with 18-karat gold and diamonds. If Barbie owned a Birkin, this would be it.

A fine handbag instantly elevates an outfit, especially when it comes in a bold color like red. The previously mentioned Porosus Crocodile Birkin in Shiny Rouge made headlines again five years later when it was sold on Prive Porter, the world’s largest curate of unused Hermès Birkin bags. It was sold for $298,000 to an anonymous buyer.

You probably recognize this Birkin because you’ve seen it dangling on the arms of celebrities like Heart Evangelista, Kim Kardashian, and Kylie Jenner. This Birkin is crafted with Niloticus Crocodile leather and is intensively dyed to light hues of white and taupe, designed to evoke the dreamy landscape of the Himalayan mountains. It raked in $379,000 at a Christie’s auction in 2017, beating its own record back in 2016 (when it sold for $300,108) as the most expensive bag ever sold.

Claiming the third spot on this list is Hermès’ Chaine d’Ancre bag designed by Pierre Hardy. It features an intricate, sculpture-like design using nothing but links and 1,160 diamonds. Only three of this kind were made. The Chaine d’Ancre is one of the brand’s recurring motifs, used in everything from bags, bracelets, and other jewelry.

Coming in at second place is Japanese designer Ginza Tanaka’s rendition of the famous Birkin, which is probably the most precious-looking piece on this list. Made with pure platinum, the entire bag is generously embellished with 2,000 diamonds, while a large eight-carat one sits front and center. What’s more is that the bag can be dismantled into separate jewelry pieces—so you could carry the bag as a clutch, put the strap as a necklace, and wear the centerpiece as a brooch. It isn’t clear whether this bag has been sold or not, but whatever the case, this is definitely something to behold.

Finally, the most expensive bag ever produced in history is Hermès’ Kelly in Rose Gold, which was released in 2012 and hasn’t been dethroned since. Instead of leather, this Pierre Hardy-designed piece is made entirely with solid rose gold and is completely decked out with 1,160 diamonds. It can be held at the handles or worn on the wrist as a bangle. Only 12 pieces with three variants of this kind exist, and they’re proof that bags are wearable works of art.