The Filipino designer called them "ungrateful" after the beauty queen's team claimed his gowns did not fit well and arrived late. 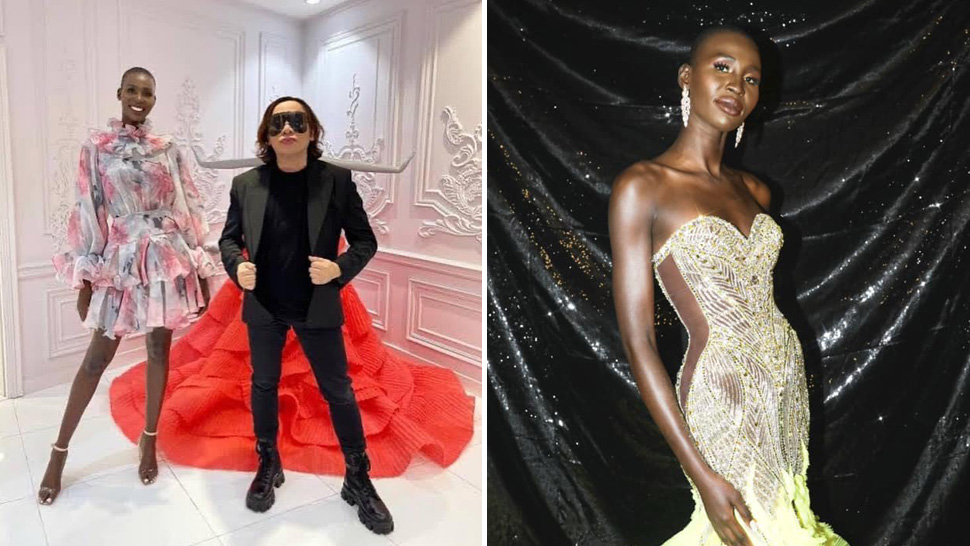 Early this week, many were taken aback by Miss Universe Canada 2020 Nova Stevens' failure to land a spot in the global pageant's top 21. She was considered by pageant fans as a frontrunner in the competition, and found it a shame that her finals gown created by Filipino designer Michael Cinco did not make it to the stage. Luckily, both Nova and Michael treated everyone to a sight of the garment on social media after the pageant.

However, it turns out that there's more to the story than everyone thought. Because today, Michael Cinco has published a lengthy Facebook post calling out the Miss Universe Canada team and Nova Stevens herself. In the post, the designer shut down claims by the beauty queen's publicist MGmode that Michael's gown for the candidate arrived late and did not fit Nova well.

In the post, Michael shared a screenshot of publicist's comment on Instagram that bears the accusations. In it, MGmode also stated that they had to "fix" the final gown but were not able to do the same for her premilinaries outfit.

"We went to Dubai 2 times, to prevent such mistake since it happen to us as well with Argentina's gown last year @marianajvarela and Uruguay @fionatenutavenerio," the comment reads. "Such a terrible mistake should not have happen! We love Michael! But this was inexplicable." The publicist then mentioned how Michael's team had time to make a custom gown for another candidate despite the situation. "Things don't add up! Sadly," they conclude.

Michael Cinco initially responded to the allegations by replying to MGmode's comment, but as the post bearing it has been taken down, the designer aired his side once more on his personal account. "I don't normally respond to unnecessary social media rants or any negative criticisms about my work but this one caught my ire as it seems to put uncalled for blame on my team week after Miss UNIVERSE," he writes.

"The audacity of truth to be told when it is bereft of it.. Now this is for you to the whole Miss CANADA Team Migüel Martinez, Denis Martin Davila, and Miss CANADA Organization and your ungrateful Miss CANADA Nova Stevens. You have been spreading fake news about me and my team being unprofessional days before the pageant but I chose to be quiet and calm. But this time, I need to stand up for me and my team, as it is just so UNFAIR!"

The Dubai-based designer began by stressing that his gowns arrived on time for the pageant. "Or how could you have sent me photos and videos of her wearing them, showing how the gowns perfectly fitted her, days before each event. You even posted a video of NOVA in her last fitting and she was happy," Michael notes.

Regarding claims of the garment being ill-fitting, the designer reveals that he was "forced" to make Nova's 26-inch waist line cinched to 23 inches—"I obviously didn't heed even if you said that in pageants, comfort doesn’t matter. But PLEASE don't say that her gown was ill-fitting." As proof, Michael attached photos of Nova wearing the gown.

The designer also rebutted claims that his team was "trying to sabotage" Miss Canada's claim to the crown, calling the rumor "absurd." "I even went out of my way hiring a team of world-class photographer to shoot her in my couture gowns at a world-class location in Dubai just to give her extra publicity mileage and create for her a balance of glam and luxury as opposed to her humble homecoming in Africa," he explains. "And everything was PAID FOR BY ME. Did you get that?" The shoot also featured Nova Stevens in a gown by another Filipino designer, Jaggy Glarino.

MGmode's statement about Michael's team making custom gowns for other candidates was debunked by the designer as well. According to him, Miss Mexico and now Miss Universe 2020 Andrea Meza, Miss Romania Bianca Tirsin, and Miss Czech Republic Klára Vavrušková did not wear custom gowns but couture pieces from his latest collection. Michael then mentioned that these candidates including Miss Universe 2017 Demi-Leigh Tebow expressed gratitude to him for lending his pieces by sending him thank you messages, while Miss Canada and her team did not.

"STOP blaming me for Nova's not making it to the Top 21 in Miss UNIVERSE. In fact, she did not wear my gown to the prelims as you were earlier posting that she will wear another gown. And now YOU'RE TELLING ME that her PRELIMS GOWN KILLED HER to advance to the finals. Am I to be blamed for that?"

Disheartened by the false claims, Michael made even more revelations about his experience working with Miss Universe Canada's team over the years. He stated, "YOU and your team have been USING me for the past 3 consecutive years to dress up your candidates WITHOUT PAYING ME ANY CENTS! A SIMPLE THANK YOU NOTE FROM NOVA, YOU AND YOUR TEAM would have sufficed. But you don't have the grace and decency to do that. YOU ALL ARE UNGRATEFUL, VILE and professional USERS."

Ending his post, the Filipino designer sent a message to MGmode about getting help from Filipino designers for future pageants. "Next time don't ask me or any FILIPINO designers to dress up your candidates. Ask your Canadian designers to showcase your works in world stage...STOP scamming FILIPINO designers...HOW DARE YOU...SHAME ON YOU and your whole CANADIAN Team...#sorelosers #moveon #lifeisnotallaboutMissUniverse..."

As of May 23, Michael's post on Facebook has garned 40,000 shares and over 3,200 comments from supportive Filipinos and clients. Neither MGmode nor the Miss Universe Canada organization have addressed the situation so far, though Nova Stevens has uploaded a video in response to the situation.

10 Best Designer Sneakers That Won’t Go Out Of Style