Another Dubai-based designer shows for the charity gala. 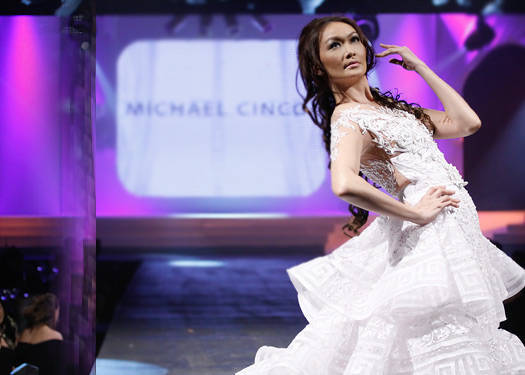 While Michael Cinco has had a number of fashion shows in Manila—twice at Philippine Fashion Week and the Russian segment at Bench Uncut—in our post-show interview, the Dubai-based designer revealed that the Red Cross Ball was his first gala show in Manila.

The three-part collection was noticeably different from his past shows; not for the lack of crystals but in the design direction. Gone were the theatric headdresses, crystal encrusted shoes and the exotic renditions of his last solo show at Philippine Fashion Week in 2010. Instead we saw gowns and mini dresses that had a mainstream appeal, even a few chiffon creations bearing the barest of beadwork.

“I wanted to create pieces the women in the audience could imagine themselves wearing; not fantasy this time,” said Michael. He added in jest, “We’re going through a recession now,” so the extravagance does need to be tempered down.

It was the first collection, inspired by Greek architecture that reminded us of his previous work. Ria Bolivar opened the show in an asymmetric column dress with a brocade pattern of beadwork running down the length of the skirt; a single armored shoulder commanding the audience’s attention. Then bold mini dresses came forward, embellished with laser-cut ceramic pieces arranged to form the regal symbols of Ancient Greece—the wings of Hermes, the columns of the Acropolis, and on one gray dress, the marked face of Zeus.

The second collection had a slew of goddess gowns come marching down the runway with the color palette moving from bright to dark, alluding to the Santorini sunset. (Michael revealed he had spent a few months there on vacation and fallen in love with the place.) It all looked light as a feather, despite the full beadwork on some. The near invisible tulle holding up intricately sewn crystals was brilliantly concealed, making it appear like the lace-like patterns were second skin.

The less embellished dresses were no less glamorous. A closer look reveals meticulous pleat work and the fine fabrics like lace and silk chiffon that were used. What was also apparent was a hidden corset in the gowns that really created a perfect figure for each of the models; a trick many women would appreciate.

A very Filipino touch was how he ended the show with three bridal gowns; it was common in the earlier days of Philippine Fashion for the wedding gown to be the finale. No less than Georgina Wilson, Claire Unabia, and Marina Benipayo were tasked to model the grand gowns. “I made a rather large wedding gown so I needed someone like Marina to carry it,” said Michael of his choice to have the seasoned and acclaimed model don the final dress.

With his foot in the door via America’s Next Top Model, Michael admitted to having his sights set on dressing Hollywood’s A-listers. It’s all too easy to imagine these gowns on the red carpets of glamorous awards nights (he did dress Angel Locsin when she attended the Emmy Awards) and charity galas. And with more wearable dresses in his arsenal, we’ll likely be seeing a lot more of Michael’s work in the country as well.