Covet these crown-toppers that debuted in London Fashion Week! 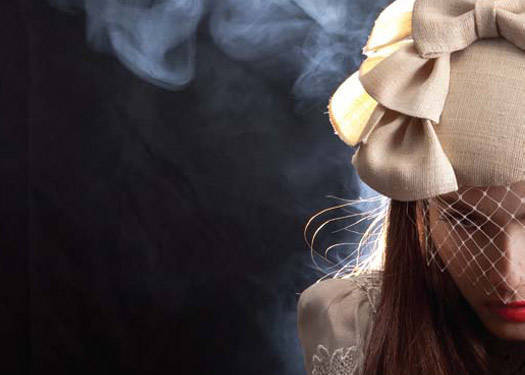 London is Mich Dulce's second home, and it is in this city where the milliner debuted her A/W 2012-2013 collection, In Dreams You Are. She didn't just do so by having an exclusive party in one of the four international boutiques her pieces are sold in, but by being part of an exhibit of emerging international fashion design talent spearheaded by the British Council and British Fashion Council during London Fashion Week.

Mich's In Dreams You Are launched last February 15, 2012, in the Philippine Embassy in Suffolk Street, London, as part of the International Fashion Showcase 2012, which aims to give international press and buyers a chance to discover rising talent from 19 countries across the globe. Mich participates in the event as a representative of the Philippines together with designer Jerome Lorico. Her exhibit includes Jason Tan's fashion film, starring Georgina Wilson. (Click here to watch the video.)

In Dreams You Are is inspired by the decadence of Marie Antoinette and 18th century France. "Little girls dream to be a queen at 19 like Marie Antoinette, and she became a symbol of the shameless frivolity of a dying regime," says Mich. "Today, we live in an age where femininity is practically a luxury, and being girly is almost trivial and superficial. I just think we all deserve to play and to be who we dreamed of being when we were 8, and this collection is about being able to do that."

As with her previous collections, this lineup encapsulates Mich's romantic and dramatic but playful aesthetic. Exaggerated bows, crowns, and cascading frills are the main feature of the covetable headpieces. Whether the bows and crowns are positioned prominently or perched saucily on top of headbands or the circular or teardrop-shaped berets, they don't fail to evoke a girlish naughtiness that brings to mind the designer's own. Pieces for men are available, too, such as the crown beanie and the stately Duke bicorn.

With this collection, Mich continues to promote traditional Filipino materials and craftsmanship, using hand-woven piña and T'nalak, an abaca textile woven by the T'Boli women of Lake Sebu, South Cotabato. Women from the Gawad Kalinga Community Development Foundation, who are trained and supervised by Mich herself, create each beautifully sculpted headpiece.

Head on over to the photo gallery to see all the pieces from In Dreams You Are, and don't forget to watch the accompanying short film on our Videos page.

Mich Dulce's In Dreams You Are exhibit runs until February 23, 2012 in the Philippine Embassy at 10 Suffolk Street, London SW1Y 4HG. Click here for more information.

Trend Spotting At The Laneway Festival

Trendspotting At The Laneway Festival