PSA: Kelsey Merritt Is Making a Case for Sultry Backless Dresses and We’re All for It|Read more »
Fashion | By Jae Pickrell - Aug 16, 2012

The designer on his costumes for the zarzuela currently showing at the CCP. 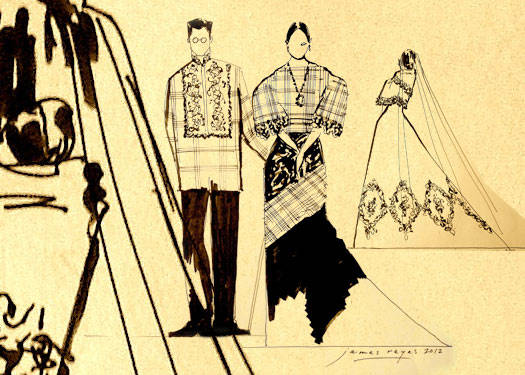 The designer on his costumes for the zarzuela currently showing at the CCP.
Shares
Share
Tweet
Comments

Severino Reyes's late 19th century zarzuela titled Walang Sugat is currently enjoying a run at the Tanghalang Pilipino in the Cultural Center of the Philippines (CCP). Filipino designer James Reyes, the late writer, director, and playwright's great-grandson, was tasked to design the costumes for the most recent mounting of the Tagalog-language play, which is set during the Philippine revolution and depicts the oppression suffered by Filipinos under the Spanish colonization, as well as the love story of a Katipunan revolutionary. 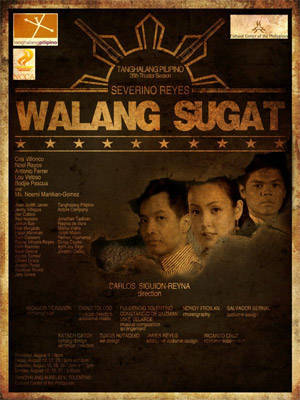 This is not the first time James has been involved with Tanghalang Pilipino, having done consultation work with them early this year. (He has also previously designed for Ballet Philippines). When one of the actors of Walang Sugat mentioned that a reenactment was in the works for this year, James mentioned his familial ties to the Father of Philippine Zarzuela. "She later told Tanghalang Pilipino's Artistic Director, Nanding Josef, about this. He got excited and wanted me to be part of the production. His idea was to bring two generations of Reyeses together in one production, a historic fête in theater," James tells us.

"It was overwhelming to me in the beginning because never in my wildest ideas [did I imagine that] I [would] be designing for CCP, and now, for my great-grandfather!" James enthuses. "What was really scary for me, though, was I had to create new costumes for the leads, while the rest of the cast would be wearing masterpieces by Salvador Bernal (National Artist for Theater Design)! With the help of Tanghalang Pilipino's costume and wardrobe department, I was able to study and research on how to make the baro't saya (specifically from the 1890s) for theater. It was a great learning experience for me because this is the first time I designed and created baro't sayas."

James's costumes will debut in tonight's gala presentation of Walang Sugat. He describes for us the clothes he made for the leads: "For the female leads, mother Juana (played by Noemi Manikan-Gomez) and daughter Julia (Cris Villonco), I wanted them to look a step above everybody else in the cast. They had to look a bit 'richer' than the rest. For this, I combined various textures of prints and lace. In my mind, the wealthier ones during that time had more access to the latest fabrics from abroad, so I incorporated some graphic Art Nouveau and Art Deco elements in their wardrobe. I also created a wedding dress for Julia. It features medallion-like embroidery on the skirt and a heavy lace baro. I wanted rich embroidery on her wedding dress because one of the songs in the zarzuela is about embroidery."
"I also did a few of the male costumes," James adds. "For the men during that time, the barong features a high collar and rich embroidery. Very fancy for the upper class and a bit  simpler for the lower class. But all embroidered on piña, often with graphic interlays of checks and stripes."

Designing for his great-grandfather's play is definitely an honor for James. He describes the experience as "very inspiring." "In fact, I may design an entire collection based on this," he reveals.