It Takes Gutz To Be A Gutierrez 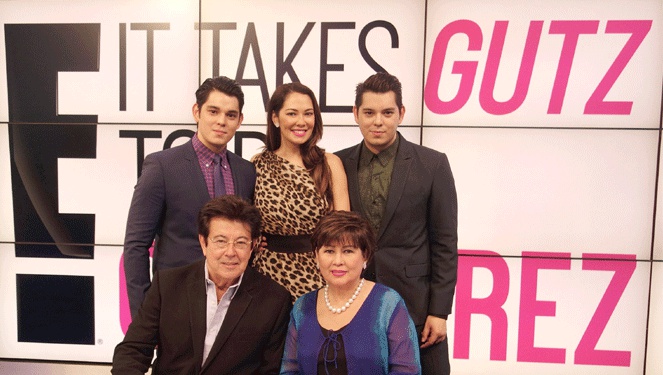 Are you all set to see them on reality television? Well, ready or not, one of the country’s favorite showbiz families, the Gutierrezes, are upping their ante with a new TV show worth bragging about. They've kept mum about it for five months, but finally it has been confirmed! Headlined by Eddie Gutierrez, Annabelle Rama, and children Ruffa, Raymond, and Richard, the bunch is at an all-time high as they are the first ever Asian family to star in a reality show in no less than the leading entertainment channel, E! Asia.

This 2014, prepare yourselves to see  the mother-daughter fights of Ruffa and Annabelle,  the relationship  of twins, Richard and Raymond, their stud of a dad Eddie Gutierrez, the young fashionistas Lorin and Venice, along with the rest of the family in a six-part series that will keep you glued to your boob tube.

We're sure a lot of you are thinking, will it be like Keeping Up With The Kardashians? Raymond says that the Kardashians gained their popularity through the show, whereas each member of the Gutierrez family has already earned their respective names in the industry, so the two shows are actually opposites. Both Richard and Ruffa on the other hand, shares that a lot of things have been said about their family (both good and really mean stuff), and this is their time to show everyone who they really are—no-holds-barred.

Here at Style Bible, we're looking forward to the fashion choices of Ruffa, her kids, and her mom Annabelle (we heard she will be sporting frocks by local designers such as Avel Bacudio, Rajo Laurel, and more!).

What do you think about the show? Tweet us @stylebibleph, we'd love to hear from you.