When Luxury Is Affordable, Who Pays?

Cross the walkway connecting Enterprise Center and Greenbelt 5 and you'll see a ton of stylish office girls. Some are dashing off to dinner, others have swapped their heels for flats, and most all are carrying the same monogrammed tote that appears to be a Louis Vuitton Neverfull. But then as you walk past, wondering how on earth another Makati girl (the kind that, too, commutes) could afford such arm candy while still making rent, you notice a small gold pendant with the letters MK dangling from the strap.

Suddenly it hits you—she’s carrying Michael Kors. A little less flashy than an LV but hey, it’s still designer (and quite affordable.) Next thing you know you’re comparing price points on your phone (around Php60,000 for the Louis Vuitton Neverfull and Php11,000 for the Michael Kors Jet Set tote), contemplating on dropping by the store once you get to the mall. 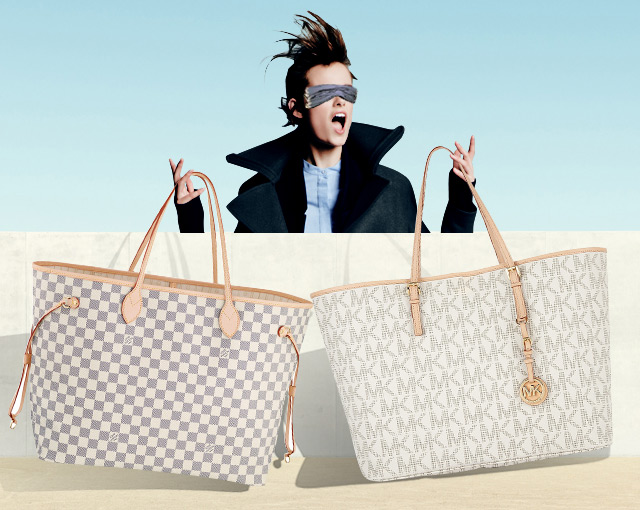 Does the label you carry on your arm still matter? These two are practically the same! Or are they?

Today, it's not uncommon to see so-called contemporary designers—the category bestowed to Michael Kors, Kate Spade, Tory Burch and similar "affordable luxuries"—patterning designs from established luxury houses, putting their own “spin” to it.

But what, even, is contemporary?

What It Means To Call A Label Contemporary

In previous years, contemporary labels have served as a vehicle in bridging the gap between high fashion and the high street. They’re the answer to those who cannot justify splurging on monogrammed leather totes, but also don't want to buy the knockoffs offered by fast fashion labels. Nowadays, shoppers are beginning to cash in on brands like Michael Kors, Kate Spade, and Tory Burch if they want to go higher than their officemates' friendlier priced and mass-produced Charles and Keiths, but not as high as a Louis Vuitton or Prada, which their paychecks can't even.

Sometimes, the contemporary shopper and the luxury shopper is the same person.

Harvey Nichols women’s contemporary buyer Shereen Basma says, “Contemporary brands appeal to both the luxury shopper and the new breed of aspirational shopper.” With it, you get the feel of luxury that comes with a “designer” tag without having to break the bank. It's just like a high-low way of dressing, isn't it? Not everyone can have a wardrobe filled to the brim with Chanel jackets and Valentino skirts, us included, so why not mix things up? At the end of the day, we all want the best that our money can afford.

Within the higher rungs of the fashion industry, "contemporary" has different connotations.

For every Kors that revels in being the workingwoman's designer, there is an Alexander Wang who personally doesn't like the word but has been referred to as a "high contemporary" label by fashion trade site, Business of Fashion. We imagine it's like the difference between calling something middle class and "upper" middle class.

Just last week, we pulled out a clutch from Forever 21 that looked exactly like the Jimmy Choo Candy clutch. But is the Michael Kors Jet Set a facsimile of the Neverfull? No, thanks to its slight modifications like the removal of the adjustable side straps, the buckled top handles, and the obvious monogram. But still, the resemblance is enough to make you think of the Neverfull, as  we did. And so this brings us to a vital question.

When luxury is affordable, who pays?

The straight answer: designers. A too-too inspired copy teeters along the line of intellectual theft, the same way that a bootleg iPod will prevent Apple from profiting on their idea. Sure, it’s unlikely that an LV buyer would be lost to MK (you might say that those sales were never theirs to begin with) but think of the reverse. What if a girl on a working class budget wanted to save up for a luxury bag? Surely, there are LV girls with MK pockets. (Not all fashion girls were to the manor born, either.)

The day will come when Makati girl finally gets that promotion she’s been eyeing and when it does, she’ll want an upgrade. Her first order of business? To trade in her Jet Set for a Neverfull, or even a Speedy.

I Was A Bride For 45 Minutes

Emojis For Morenas, Chinitas, And Mestizas