How To Be Popular And Win At Life 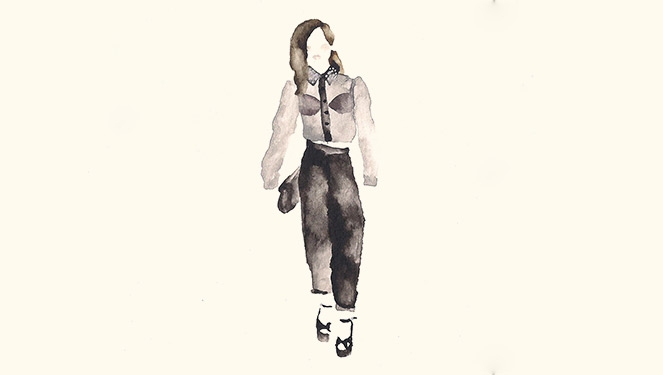 Me in a Paulina Ortega illustration (2013), a gift from Raymond Ang.

The following is a speech I delivered before the Miriam College High School class of 2015 at their graduation. Special thanks to Sir Edizon Fermin.

When I was in high school, I was part of a popular barkada called “the vixens.” Definition: Female foxes. There were 12 of us “vixens,” and we all met in first year. Our group included:

1. The future captain of the football team (She was a major dictionary reader and the one who in fact named us, when she landed on the word in the middle of third period one day).

6-7. Two girls who were always picked to be muse for intrams in Ateneo.

The remaining five of us, while not exactly the kinds of names vandalized by the boys on their bathroom stalls, filled other roles that made us popular within Miriam:

Now to many, being popular in high school was like achieving the quintessence of life. And in some ways, that is so true! But I very quickly learned that it was by making unpopular decisions that I was to truly stand out.

To backtrack, during my four year career in high school, I became the batch representative, president of the student council and class valedictorian. I was known for being smart, but in the summer of third year I did something completely “stupid.” But—it is the one decision that brought me to where I am today, at a job that I love and that loves me back. It was the answer to the question: Which college should I apply to?

See, I applied to the University of the Philippines, but instead of picking a math or science course, some pre-med, or even business, I ticked off, as my first choice, Broadcast Communication—the study of how to be a professional in the television or radio industry. I always loved to a) write, and b) dress up—as in, I would plan my daily outfits for the school fair, and it was only the week before! Anyway, putting those two together, I thought, I want to work in media someday.

But when I would compare application forms with classmates or even friends, they’d all respond with a similar expression: raised eyebrows, but a polite smile, while saying a carefully phrased, “really…?” They felt like I was throwing it all away. It was worse when I would meet my aunts. Some of them were or wanted to be nurses or doctors, so they couldn’t wrap their heads around the fact that I was going to take a course that trained hosts, DJs, or newscasters - all good and challenging jobs, but they weren’t impressed.

“Hindi ka mag-me-med?” they’d ask in the classic way of Titas. I’d reply with a confident, if not mataray, NO. And that was that.

To be honest, it stung to be doubted. I hated seeing their faces, judging me for not picking something that wasn’t serious or smart enough, and that I couldn’t make it in the real world with such a playful choice of career.

Now some of you may have experienced that same push—maybe to take pre-med or pre-law if you’re in a family of doctors or lawyers, or a business course if you have a family business. This was just like that. But know this: it is these very moments when you are being doubted that you are actually improving your chances at success.

Let me explain. If you are being doubted, you are probably going against the norm. If you are going against the norm, you are carving out a niche so that you don’t end up as one of thousands in a saturated field; in effect, you future-proof yourself. In the same way as my high school barkada wouldn’t have come to be if all of us were Ateneo muse-material - you’ve got to find your market.

On another note, there’s something to be said about choosing a field that you are so passionate about that you will defy people’s expectations of what will get you status and money, just so you can keep doing it. But then, how do you figure out what your passion is? More importantly, how do you become smart about being stupid?

A man who studied TED Talks, Carmine Gallo, wrote that passion is an obsession that you must share with others. A management professor, Melissa Cardon, called passion something that is core to your being. As in, it defines you. You cannot imagine life without it, even if people try to tell you otherwise. When you tell your friends during recess, a little dramatically perhaps, “I’m sooo obsessed about blank.” Try to catch yourself when you’re saying that. What is blank? Then explode that idea into something that could be a career, and not just a hobby. In journalism school, it’s called “notice what you’re noticing.” If it’s something other than a boy, that may very well be your passion.

Are you captain of the football team, obsessed with your player’s stats? Maybe you'd do well to pursue a career in Statistics. (That’s a true example, by the way. Statistics is exactly what my football player friend with the dictionary started out taking in UP—on a varsity scholarship.)

Another example: maybe you’re really, really into shopping. As in, you don’t eat lunch so you can save up to buy a cute skirt from Topshop on the weekend. Have you considered a career as a retailer or fashion buyer? That’s what they call the people who buy clothes for a living. They have them for department stores or those boutiques where you keep eyeing that Celine bag, and go, one day… one day…

My point is, your passion is what naturally provokes you. Things that you do in your down time and don’t take seriously - yet. Of course, it isn’t just for members of the creative class. If you were born to a family of artists, but really want to be a doctor - then that is your unpopular decision. Choose that.

You, dear graduate, are a driver of the future; you represent your generation; and your interests are the compass for where the world will go next. What is unpopular will be popular. When that happens, you will wish that you made it trend.

This brings me to my own experience. Remember my course—broadcast communication—which a lot of people doubted? It turns out that studying how to present the lighter side of the news coincided perfectly with a new topic that all of a sudden became the darling of the media in my university years: that is, fashion.

When I was a sophomore, Devil Wears Prada came out, as well as a show on MTV called The Hills, where the main character interned at Teen Vogue. After I watched a few episodes, I was obsessed with working at a fashion magazine, too. See! That word again—obsessed. Then in my senior year, September Issue, the documentary about Vogue editor Anna Wintour, came out. I was so hooked that I decided to intern at my favorite local magazine, Preview. When I was there, blogs like the Sartorialist, then Lookbook, then Instagram became popular. Basically, these were platforms where people posted pictures of their outfits or OOTDs, as they’re called. And now years later, as the editor in chief of Preview Magazine’s official website, StyleBible.ph, almost all our stories are about OOTDs—something I would never have imagined back when I was your age. Fashion wasn’t important at all, but now it’s a main agenda. Back then, I just thought, this is what I love. Even if people think it’s not as important as being a mathematician or a scientist, it’s important to me. And most of all, I will make it important.

Class of 2015, every single one of you is graduating from the popularity contest that is high school. Congratulations! But don’t think for one second that you will not walk into another one when you leave these covered courts. Everyday, there is someone who will think you are weird, or stupid, or not good enough, for making a choice that isn’t the safe bet. But always remember: being popular is not the goal. Being secure in your choices—actually choosing your choices—is so much more important. That is how you win at life. If there’s one thing you should keep in mind, it’s this: Don’t be popular, be true. This is coming from a girl who has seen both sides. Don't be popular, be true.

Would You Wear It? Balenciaga Ss 15 Headband Shades