Here's How the Slogan Tee Became a Fashion Statement

We help you brush up on some fashion history. 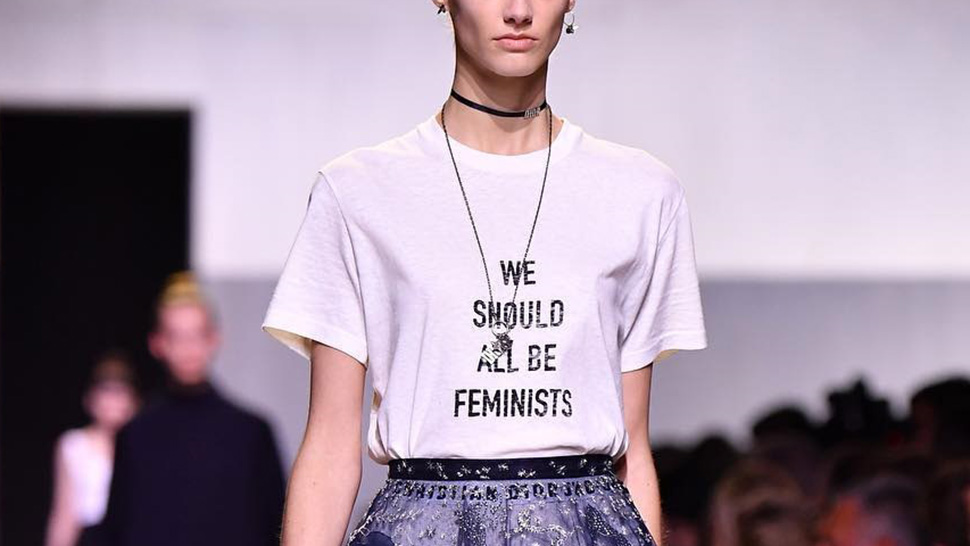 This year's love affair with the slogan tee may have started with those 'We should all be feminists' t-shirts Maria Grazia Chiuri sent down Dior's Spring/Summer 2017 runway, but people have been besotted with the statement tee for decades and decades.

Just another '90s throwback? It's not that simple. The slogan tee has allowed people to not-so-subtly shout their beliefs out into the world since the swingin' '60s' social unrest, tracing its trail of letters back to the doorstep of a shop called Mr. Freedom perched on King's Road in Chelsea.

The '70s saw purveyor of politically-charged punk Vivienne Westwood take the trend a notch higher, but it was in the '80s that Katharine Hamnett shook hands with then Prime Minister Margaret Thatcher while wearing a t-shirt that read '58% don't want Pershing', an anti-nuclear statement.

Katharine spoke for an entire generation, and her stunt made those tees the decade's unrivaled must-haves. "I wanted to put a really large message on T-shirts that could be read from 20 or 30 feet away," Katharine told The Guardian in 2009. "Slogans work on so many different levels; they're almost subliminal. They're also a way of people aligning themselves to a cause. They're tribal. Wearing one is like branding yourself."

The statement tee is representative of a sartorial meeting of minds; politically-driven or not, you're free to wear whatever it is you want to say. Take House of Holland's 2006 drop, for example: a slew of irreverent slogan shirts emblazoned with tongue-in-cheek phrases like "do me daily Christopher Bailey," "cause me pain Hedi Slimane," and "flick yer bean for Agyness Deyn."

That fleet of tees became so synonymous with the brand that in 2016, Henry Holland had models strut the catwalk in 'Let's breed Bella Hadid,' 'Give us a toss Karlie Kloss,' and 'I'm yours for a tenner Kendall Jenner'—updated, modern-day revamps of the originals. "Hamnett's t-shirts were very much about an ethical message," he said when the first collection of shirts dropped 11 years ago. "Mine are much more a bit of fun...a way for the fashion industry to laugh at itself."

Aaand that leads us back to today. Those now-iconic tees outshined even the most intricate tulle frocks at Dior, but we're not even puzzled: if all could go right in the world, power would trump pretty any day.

So what exactly is a fashion statement in 2017? Answer: plastering your advocacy clean across your chest—but, take note that it only counts if you walk your talk.

How to Make a Statement in Fashion