Why No One Wants To Be An Angel Anymore

Might this be the reason that Kendall Jenner never signed with Victoria's Secret?

Is the dream to become a Victoria’s Secret Angel getting overrated?

It has been less than 3 months since last year’s Victoria’s Secret Fashion Show 2014 took place in London. But, now it seems that more and more angels are taking flight.

We were all devastated when Miranda Kerr left the brand last 2013. Now, Doutzen Kroes and Karlie Kloss have also given up their angelhood to “focus on other priorities and opportunities” according to the label. Victoria’s Secret senior creative Ed Razek confirmed both Doutzen’s exit during the latter part of the previous year and Karlie’s, this month on Instagram.

But what’s the real reason behind the departure of these supermodels?

Page Six, an online celebrity news site, claims that Victoria’s Secret is losing angels because of the decreased pay compared to before. "The money isn't what it used to be," a source told the site. "Older contracts like Alessandra Ambrosio were in the millions, now they're like $100,000." This might be mainly because the brand has chosen to hire more models to walk for their shows and make global appearances, and so they might have had to decrease each individual pay packet. Remember when there used to be only four angels? Now, there’s eight. But then the numbers are slowly decreasing. Again.

There’s also the issue of the increased time commitment from the models. Angels are required at least 50 days a year to dedicate to the brand, and that gives them less opportunities for doing bigger fashion campaigns. Alessandra Ambrosio has also been rumored to be currently renegotiating her contract with VS. 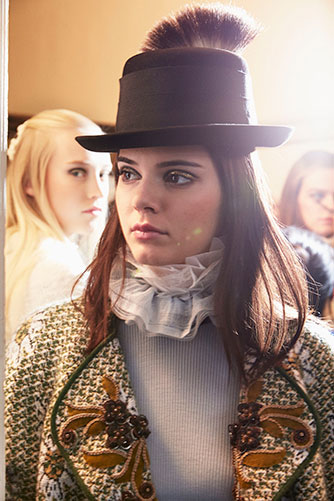 Might this be the reason that Kendall Jenner never signed with Victoria’s Secret? It was only 2 years ago when she told E! News that she’d love to model for the brand. "It's always been kind of a dream of mine," the then 17-year-old Keeping Up With The Kardashians star said. "It's something I'd love to do." But when the time came for the Victoria’s Secret Fashion Show last 2nd of December 2014, she chose to walk for the Chanel Métiers d'Art show in Salzburg, Austria instead with model pal Cara Delevingne.

Judging from the elaborate Rococo setting (the Leopoldskron castle, no less), Karl Lagerfeld is not one to scrimp on his girls, or anything else, for that matter.