The cover's concept was based on the 1980 Filipno film, Temptation Island! 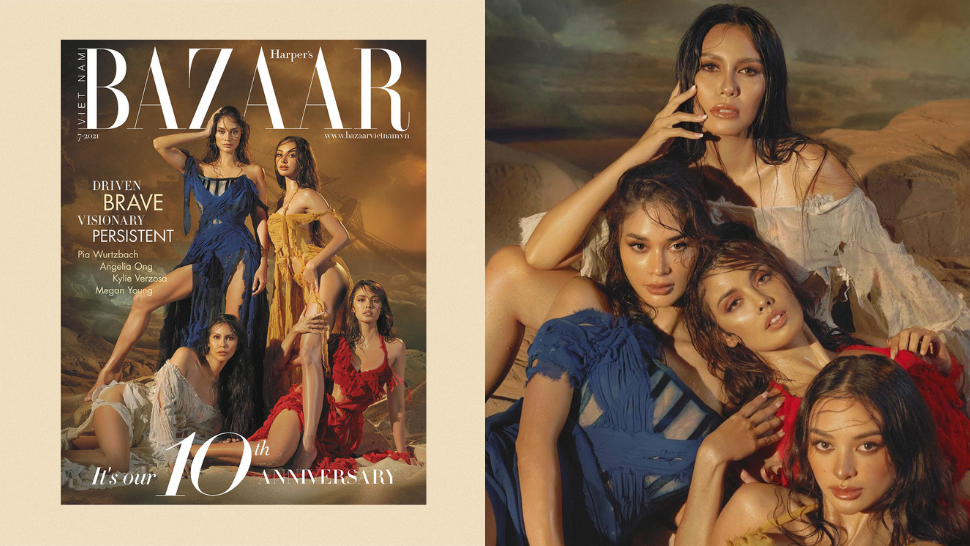 From Anne Curtis’ 7th anniversary cover issue to Alex Gonzaga’s 10th anniversary cover earlier this July, it looks like Harper’s Bazaar Vietnam is not shying away from showcasing Filipina beauty all over Asia. That said, this isn’t also the first time our powerhouse queens—Pia Wurtzbach, Megan Young, and Kylie Verzosa—appeared on the renowned publication’s cover. The winning queens were highlighted as “The Hottest Queens” back in January 2018. And since it’s pageant season again, this stunning new cover issue was undeniably a delightful surprise!

The huge Filipino creative team behind the cover is comprised of photographer BJ Pascual, creative director Eldzs Mejia, and production designers Justine Arcega-Bumanlag and Aren Dale Santos. As for the queens’ glam team, each of them had Adrianne Concepcion as their fashion stylist, and their own go-to makeup artists: Mac Igarta for Angelia’s, Mickey See for Pia and Megan’s, and Anthea Bueno for Kylie’s. On top of that, hair stylists Aries Manal did Pia and Angelia’s while Renz Pangilinan did Megan and Kylie’s.

According to BJ’s Instagram post, it seems like the whole concept was based on the famous line, “Walang tubig. Walang pagkain... 'Di magsayaw na lang tayo!” from 1980 Filipino film Temptation Island directed by Joey Gosiengfiao.

Fun fact: The film actually starred four beauty contest winners—Mutya ng Pilipinas 1975 Azenith Briones, Binibining Pilipinas-Universe 1978 Jennifer Cortez, Miss Maja Pilipinas 1977 Bambi Arambulo, and Miss Magnolia 1979 Dina Bonnevie—which correlates to the film’s premise of beauty queen finalists getting stranded on an island. Admittedly, this is a witty and clever take on flaunting the sultry wet look while they wear specially customized dresses designed by Carl Arcusa, as they represent all the colors of the Philippine flag.

In the magazine’s official site, the editorial described it as “the women who best embody the greatness, and the glory of the Filipina; the Philippines’ prides Miss Universe Pia Wurtzbach, Miss International Kylie Verzosa, Miss Earth Angelia Ong, and Miss World Megan Young.” Harper’s Bazaar Vietnam also explains that they have transcended beyond their archipelago to introduce the women who have set a new standard for Asia. “Our queens have not just only won the most elusive titles, bringing worldwide prestige and historical honor to our country, but have also become the flag bearers for all of Asia, setting a new standard for beauty queen excellence in the region, and solidifying the Philippines as the newest global powerhouse,” they add.

Aside from the breathtaking front cover, they also pulled off three more photo concepts that truly showcased how their beauty can easily transform and confidently own any theme. The dark tone concept with Gucci leather blazers, corset tops, and mesh stockings has honestly left us in awe. They look like independent women who are ready to successfully conquer their careers.

As for their second look, the girls flaunt their neutral toned deisgner fashion items from Balmain.