The late great Salvacion Lim Higgins' stunning creations
are as relevant today as they were half a century ago. 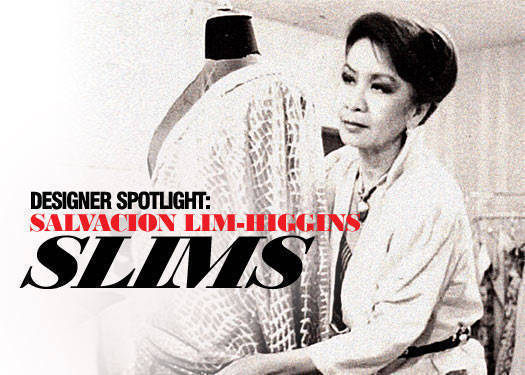 The late great Salvacion Lim Higgins' stunning creations
are as relevant today as they were half a century ago.
Shares
Share
Tweet
Comments
Slim's is an acronym for the late Salvacion Lim Higgins, the icon of Philippine haute couture from the fifties onwards. The petite designer was a fashion giant when it came to her cutting–edge style. Her trademarks included her considerable skill on draping; her innovative approach to Filipiniana; and her silhouettes, stunning enough to rival fashion houses abroad.

For Slim's, fashion was art. You could define her clothes by the yardsticks of art—line, color, and form. Gowns were sculpted on the body and took untraditional shapes, which could appear strange, yet strangely enough flattered the feminine form in ways never seen before. Unusual colors and color combinations enhanced morena, mestiza, and the occasional redhead complexions.

At the time she was considered daring, today we would say she thought out–of–the–box. A good portion of Slim's designs centered on Filipiniana, especially in the post-war era when it was ultrafashionable to be nationalistic even in one's choice of dress. Former Senator Helen Benitez, head of the Bayanihan dance troupe for whom Slim's was the most prominent designer, credits her with having “transformed the Philippine costume into an art form”. Not only that, Slim's brought then–unkown Philippine fashion abroad through a number of fashion shows during her career.

But neither was Slim insular in her way of thinking. She was confident enough of herself as a Filipino designer to be able to explore fashion from a global perspective. Influences from cultures abroad made their way into her designs back here. Her clothes found an equal amount of admirers in women both foreign and local. Presidential wives and daughters plus the cream of Manila society formed the backbone of her clientele. But Slim's was no snob, and a number of times she made the dreams come true of brides who normally could not afford her gowns.

Slim's lived her life and practiced her art by pursuing what she believed in without compromising either her passion or her integrity. Defying the social restrictions of the era she grew up in, she traveled without a chaperone to Europe where she was exposed to the extravagant possibilities of haute couture. She was the quintessential Filipino designer who could have based herself anywhere, but chose her home of Manila instead.

Slim's leaves behind a colorful legacy—a number of exquisite gowns, a school that continues to pass on many of the lessons she herself wrote. Her children and nieces carry on a tradition of artistry in the same fields: painting and fashion. Slim's refused to swim with the tide, choosing instead to be true to the dictates of her innate artistic temperament. She lived and worked each day, and up to the day she died, with passion and zest. Most of all she was, very proudly, a Filipino fashion designer. Here, her children Mark and Sandy Higgins talk about the proud legacy of a veritable fashion force.


How did she start out in the fashion industry?
Mark Higgins: Her first love was painting, and she came from a family that dabbled in painting (plus a mom who made her own ternos). She enrolled in Fine Arts at UST where she was mentored by people like National Artist Carlos “Botong” Francisco. When her fashion sketches were published in The Manila Times, her 'accidental' fashion career was launched.

What was the Philippine fashion industry like then?
Sandy Higgins: Post-war Philippines was an idyllic time when Filipinos felt very patriotic and women wore Filipiniana by choice to gala affairs. Her contemporaries were [Ramon] Valera, Marina Antonio, and New Yorker, to name a few. Life was glamorous and laid–back, it was nothing [to the women] back then to order three designer gowns for one day—[for] a luncheon, afternoon tea, and an evening [ensemble for the] Kahirup ball.

What inspired her?
Mark Higgins: First and foremost, I would say (because she was an artist who took inspiration from everything), her stay in Paris and exposure to all the rich possibilities of haute couture. She attended the shows and was enthralled. She saw how haute couture was not just about extravagant designs but impeccable workmanship—zippers were ingeniously hidden and gowns could be worn inside out.

How did she evolve as a designer?
Sandy Higgins: She moved with her times. It was Filipiniana when that was called for but she also didn't hesitate to bring foreign influences back home—clothes influenced by Israel, Africa, Morocco. In the late '70s, when ready–to–wear began to answer the needs of working women, she came up with her own luxe RTW line. Slim's RTW line was never what we understood RTW to be. She had a Pret Couture line starting in the late '70s when RTW was really coming into its own with the first SM Boutique Square in Makati. Slim's came up with half–finished semi-couture pieces which could then be fitted on the client herself, and could be finished in a hurry.

What was her design process like?
Mark Higgins: She spoke to her client, the client's husband, got as many details as possible as to the event (where it would take place, how many people were expected). After that she was the kind of designer where it was best you left it to her. But she was not known to disappoint.

Why did she start Slim's Fashion School, and what has happened to it?
Sandy Higgins: She set up the Slim's Fashion and Arts School 48 years ago in order to pass on the lessons she had learned and the fashion tricks she had devised for herself. The school has graduated thousands of designers, seamstresses, tailors; when you see the complete Who's Who of graduates, you will agree her school shaped today's fashion in no small way. (Think Lulu Tan–Gan, Joe Salazar, Caloy Badidoy, Pepito Albert, Cesar Gaupo, Oskar Peralta, and so much more. She also gave (and the school still does) scholarships to any deserving student who couldn't afford [the tuition].

Behind The Scenes Of Preview November 2009: Anne Curtis