DID YOU KNOW? This Filipina Won an International Modeling Competition by Kendall Jenner's Agency|Read more »
Fashion | By Jae Pickrell - Feb 28, 2011

Insights from a maverick designer who’s been through it all. 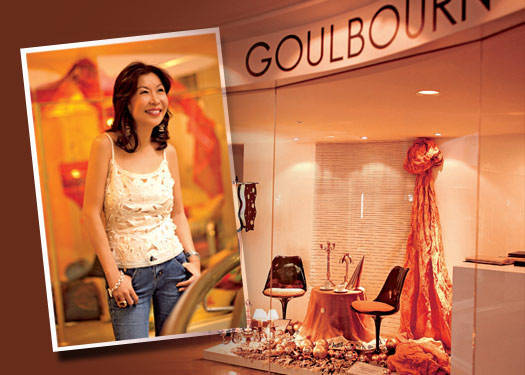 Pauline Juan sat down with Silk Cocoon designer, owner, and president Jeannie Goulbourn for the May 2007 issue of Preview to talk about the latter's beginnings in fashion, her Silk Cocoon label, and many more.

Guess which esteemed late designer she's related to, and which Asian company gently refused her design talent back in the day? Read their conversation to get to know Jeannie as a designer, and as one of the pillars of the Philippine textile industry.

WHEN AND HOW DID YOU FALL IN LOVE WITH FASHION?

I did fall in love with fashion at a very early age—I think at five years old. It was magic to watch the couture clothes unfold in my aunt’s [the late great designer Salvacion Lim Higgins—Ed.] atelier. I was totally fascinated by beads from Paris, embroidery that were like real flowers and leaves. That was my world—colors, textile, and the passion of my aunt.

HOW DID YOU START OUT IN THE INDUSTRY?

At 13 years old my paternal grandma taught me how to sew. I was designing and making my clothes at 16 with my Aunt Purificacion helping me with patterns and draping on the mannequin. I was being groomed by my aunt Puring to run the school that she started, Slim’s Fashion School. At 15, I took an intensive pattern making program.

By 19, I was asked to teach Basic Pattern to new students.

WHATEVER HAPPENED TO THE JM GOULBOURN LABEL FROM SM’S OLD BOUTIQUE SQUARE DAYS?

After seven years as a fashion designer with the JM Goulbourn label, I thought we could export our brand. In 1983, I checked out our textile industry. Oh my gosh, the machines were not as modern and innovative as what I saw in the movies shown to us at the Fashion Institute of Technology. It was so disappointing. We didn’t even have silk.

I spent time trying to develop a line of printed fabrics with a local manufacturer—they just couldn’t make it. I talked to export garment manufacturers, mostly Jewish at that time, and they weren’t the least interested to do prototypes of clothes we local designers had done. That remains till now. The Philippines is merely a sub-contractor of the garment industry in America and Europe.

As Thailand, India, China support designers by subsidizing factories so they can export. The Philippines is not thinking that way at all. We are excited to do fashion shows, but we have no export orders, no designer brand label. We missed the boat. The government never brought the designers and exporters together. Banks could never finance a passionate designer, nor could export factories take a 5-10% cut [from their profit] to risk on local designers.

HOW HAVE YOU EVOLVED AS A DESIGNER?

I get bored fast. When I could not get a big factory to support me and when no one could understand my ideas for a global market, I decided to give up garment export under my own label. The chance to get into home textile using handlooms was so intriguing. The Silk Cocoon label entered the European market ten years ago. I opened Silk Cocoon, a high-end boutique for my daughter Katrina and me to do couture with the fabrics we wove. In the whole world, how many boutiques can say they have their own weaving looms, and can dye 2000 colors for their clients to choose from? We can do any shade—and we do even five meters for matching shoes or bag.

WHAT’S THE BEST THING ABOUT BEING A DESIGNER?

That I can dream, and dream in three dimensions.

Fabrics, textiles talk to me.  I design after.

I see the fabric—its feel, colors, and prints. I can’t live without fabrics. They are my weakness.

HOW DID THE IDEA FOR SILK COCOON COME ABOUT?

The brand name, the label came to my mind instantly when I rented the space at the then New World Hotel (now the Renaissance Makati Hotel). I was challenged to open my own silk shop because I was turned down by Jim Thompson when I asked to design clothes for their Bangkok shops using their silk. I was gently told that only Thai people could work in Jim Thompson.

WHICH TRADE SHOWS ABROAD HAVE YOU SOLD YOUR TEXTILES AND WHO ARE YOUR MORE FAMOUS CUSTOMERS?

We have joined many show in the last five years: Biennale in Paris, which is by invitation only, and Incontri in Italy. These two are the most prestigious shows. Later, I joined Budji Layug for a show in Milan. Textile shows are different from garment or home accesories shows. The setup is dramatic. Architects and interior designers from all over the world come.

HOW DO YOU STAY ON-TREND AND UPDATED?

I watch street scenes, travel a lot, and read a lot. There are many places one can pick up trends.

I used to do that when I was deeply involved with SM—but things have changed now. Most retail shops buy overruns from China, which are trendy enough.

WHAT ARE YOU MOST PROUD OF?

Having been blessed with two daughters that both excelled in their work. Katrina, in Paris and New York with Liz Claiborne; Natasha with Ralph Lauren and later Nine West in New York and Hong Kong.

Having had 3 1/2 years at McCall’s magazine when it was the number one seller. To work with then editor in chief Shana Alexander and Virginia Steele, the editor behind McCall’s craft magazine. I was the first Asian hired and included in the staffbox. I was in charge of McCall’s patterns—what a rare, colorful experience—and I got to go to the European shows in the ‘60s, when YSL was big.

Starting the JM Goubourn line at SM, when there was no ready-to-wear to speak of then. As its fashion consultant, we formed fashion to the point. Women were buying at SM Boutique Square in full force. We set the trends, the colors, the shapes. We were the talk of the whole city for many years.

WHAT WAS THE FASHION SCENE LIKE WHEN YOU STARTED OUT IN THE ‘70S?

Fashion scene?  It was couture, or going to dressmakers on small side streets, or getting a sewing girl to sew clothes in the homes of rich people. There was no ready-to-wear, except for two designers, Cesar Gaupo and Christian Espiritu, who were just starting. SM Shoemart in Makati was a blue print when they asked me to join them as fashion consultant. I formed a group—nine artists with nine assistants—and got quite an independent hand from Tessie Sy-Coson to work out new products, new ideas, and fashion campaigns. It was in 1976 that I launched the JM Goulbourn ready-to-wear line.

DOES BEING FILIPINO FACTOR INTO YOUR DESIGNS?

Yes, especially with textiles. I insisted on weaving abaca (similar to sisal of Africa) with silk. The contrast of smooth and rough was exciting. The first show I joined in Paris gave me such a small space I almost backed out. But the owners of textile companies—the big boys—came back more than twice to the booth. One magazine featured “Du Textiles de Futur” and five out of the six-page article were all from the Silk Cocoon factory.  But we allowed distributors to re-brand them.

—written by Pauline Juan, reprinted from Preview May 2007

Behind The Scenes Of Preview March 2011