JUST IN: Jinkee Pacquiao Is One Glamorous Ninang at a Wedding Wearing Accessories Worth at Least P10 Million|Read more »
Fashion | By Yanna C. Lopez - Dec 28, 2019 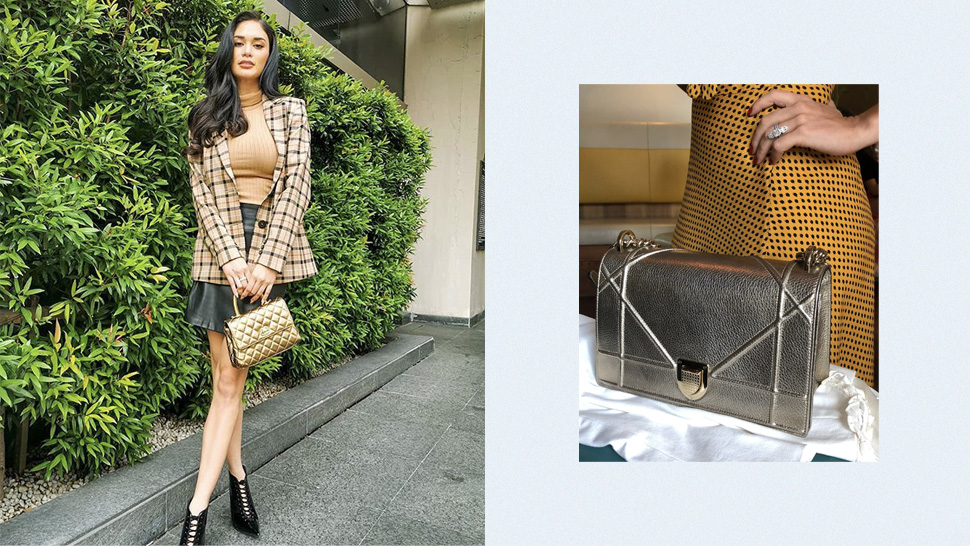 Pia Wurtzbach is famous not only for bagging the sparkling, coveted Miss Universe crown back in 2015—she's also known for her drool-worthy collection of arm candy. In her closet hang some of the designer bags you just might be dreaming about! If we're right, stay with us and scroll on to learn a bit more about five of her favorite, most-photographed purses:

You know how, for some unexplained, miraculous reason, Chanel's Classic Flap is for literally everyone? Ask every chick, from the prim Heart Evangelista to headbangin' heavy metal queen Arci Muñoz—they all own at least one. It's the investment piece of dreams, arguably the only designer bag to really put your money on should you be forced (god forbid!) to choose just one. Whether you agree or not, you've gotta admit that those are some intimidatingly massive shoes to fill. That said, we're placing our confident bets on the Coco Handle, born in Fall-Winter 2015, as a little sibling worthy of earning the same ageless fame.

Here's a fun fact about one of Pia's newest babies: Dior's dainty Lady Dior was originally unofficially named the Chouchou. That moniker clearly didn't stick around for long, because it was Princess Diana's undying devotion to it that really cemented its place in the scene, regally bestowing upon it the momentum that has successfully pulled it through the decades' changing tides. It was 1995, and France's then-First Lady Bernadette Chirac gifted the visiting Diana the petite black bag, adorned with charms spelling out the label's signature, at the Paul Cezanne art exhibition in Paris. It was only the beginning of perhaps her most memorable love affair. In 1996, Dior lovingly rechristened it the Lady Dior. Instantly beloved by women whose adoration for the People's Princess, as Di was fondly dubbed, knew no bounds, it sold over 200,000 units in the next two years. There's no stopping this charmer—it's emerged victorious in the face of fashion's many drastic evolutions. A royal flush!

Edgy, tough-chick younger sis to the demure Lady Dior, the Diorama debuted in Spring-Summer 2015 under the creative direction of Raf Simons, and effectively gives off that elusive if-you-know-you-know vibe most other purses can only hope to achieve. Deliberately made to be devoid of any logos yet lovingly crafted bearing Dior's recognizable signature stitching, it's a flap that's equal parts subtle and status-sealer, created to spark the interest of a more discerning, minimalist demographic. Well, that goal was achieved, alright! We particularly like Pia's chrome pick in sleek, embossed Cannage calfskin: It's got both sophistication and attitude. That U-shaped clasp is telling enough to make a statement sans being too loud.

Versatile, beyond posh, and available in a thrilling myriad of colors—what's not to love about the Carolina Herrera Initials Insignia? Quite possibly the brand's most indentifiable leather purse, it was introduced in 2017 to mark the namesake Venezuelan label's 35th anniversary. This young icon's just the right mix of statement and lowkey. We also like that you're spoilt rotten for choice when it comes to straps: The sporty web striped fabric version is great for pared down days, while the sleek matching leather option polishes up. Or, make like Pia and carry it like a little clutch!

A bit of trivia! In February 2015, the late Karl Lagerfeld said: "Chanel had this attitude, it's the very spirit of Chanel. She'd picked it up from Boy Capel, the great love of her life... Indeed, the bag's called Boy Chanel." There you have it, folks! You may think of it as the offspring of this famed affair, eons after both Coco and her lover (who died in a tragic car accident on his way to a rendezvous with her) were laid to rest. How raptorously romantic. A touch masculine in design and easily also a tribute to Mademoiselle's liking for menswear influences, Karl also mused of it, "Chanel used men’s underwear to make dresses; she had this boyish attitude." It's a pretty remarkable fusion of influences! For context, Captain Arthur Edward "Boy" Capel was a British polo player and highly intellectual politician who met Gabrielle in 1909 and initially financed her flourishing shops. His dapper dress sense is what inspired her to coin the inimitable Chanel look of straight, boxy blazers and chic sobriety, reflected on the Boy's own bold, sure lines and heavy hardware.

Pia Wurtzbach Had the Most Instagrammable Fall Outfits in Germany