JUST IN: Jinkee Pacquiao Is One Glamorous Ninang at a Wedding Wearing Accessories Worth at Least P10 Million|Read more »
Fashion | By Yanna C. Lopez - Sep 15, 2019 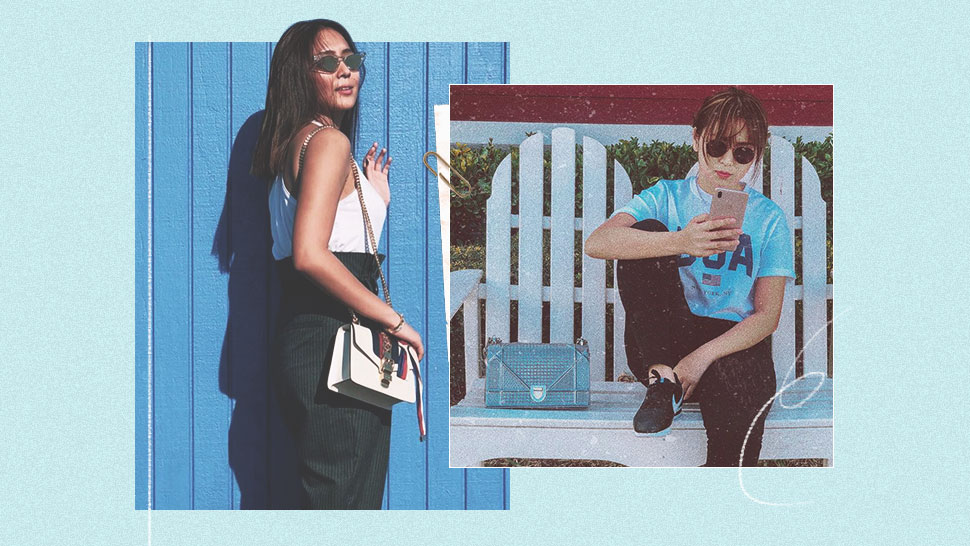 IMAGE INSTAGRAM/bernardokath
You'll want all of them for yourself!

We've long trained envious, admiring gazes on Kathryn Bernardo's extensive collection of high-end arm candy. She's got a flair for 'em! While the stylish, celebrated Hello, Love, Goodbye actress hasn't actually given her multitude of adoring fans the closet tour they're dying to see, we've done a bit of research ourselves!

Here, we took a peek at her Instagram and singled out the designer bags she owns and loves for closer inspection. Imagine what these coveted numbers must look like all lined up in her enviably well-stocked wardrobe. Sigh!

Kath sure has fallen hard for this baby. In fact, it looks like she owns two versions of it, one in smooth leather and the second in plush velvet! Boxy and structured yet elegantly gilded with scalloped hardware reminiscent of vintage carousels and music boxes, the Prada Cahier is actually inspired by old reads! No wonder it looks like it'd blend in perfectly perched on your grandfather's prized library shelf. Released in 2016, Prada describes it as "defined by elements inspired by ancient books or a precious private diary." Peer closer and find that the Cahier's upper part–generally in a contrasting hue–represents a book's spine, while the front flap is an apt interpretation of an expensively bound tome cover. This novel (get it?!), widely-read class act tops our wish lists, for sure.

Edgy, tough-chick younger sister to the demure, charm laden Lady Dior, the Diorama debuted in Spring-Summer 2015 under the creative direction of Raf Simons, and effectively gives off that elusive if-you-know-you-know vibe most other purses can only hope to achieve. Deliberately made to be devoid of any logos yet lovingly crafted bearing Dior's recognizable signature stitching, it's a flap that's equal parts subtle and status-sealer, created to spark the interest of a more discerning, minimalist demographic. Well, that goal was achieved, alright! We particularly like Kath's gray and chrome pick in sleek, embossed Cannage calfskin: It's got both sophistication and attitude. That U-shaped clasp is telling enough to make a statement sans being too loud.

How could anyone forget Kath's bite-sized, monogrammed companion on her Moroccan anniversary getaway with on-and-offscreen beau Daniel Padilla? Certainly not us. She paired it with everything from breezy, relaxed linen beiges to that adorable, ruffled tangerine gingham frock, unofficially crowning it the most versatile number in her collection. She also slung it across a flirty white sundress on a sun-soaked summer tour of Napa Valley's famously stunning Castello di Amorosa winery. You can bet her Petit Malle's earned some serious travel mileage. Its name means "little trunk," after all, and is patterned after the same ageless, historic trunks that first made LV famous among the European jetset almost a century ago. The only real difference is that this guy is so much more microscopic.

First hitting the label's runway in Autumn-Winter 2014, Nicolas Ghesquiere has likened the idea behind the Petit Malle to Russian matryoshka dolls, deeming it a nostalgic, mini modern version of its big, stackable grandmothers.

A quick scroll through Kath's Instagram will easily reveal that she's worn her beloved black Boy to casual pampering visits to The Aivee Clinic, snowcapped family vacations, and every other occasion in between. We don't blame her.

Now, a bit of trivia! In February 2015, the late Karl Lagerfeld said: "Chanel had this attitude, it's the very spirit of Chanel. She'd picked it up from Boy Capel, the great love of her life... Indeed, the bag's called Boy Chanel." There you have it, folks! You may think of it as the offspring of this famed affair, eons after both Coco and her lover (who died in a tragic car accident on his way to a rendezvous with her) were laid to rest. How raptorously romantic. A touch masculine in design and easily also a tribute to Mademoiselle's liking for menswear influences, Karl also mused of it, "Chanel used men’s underwear to make dresses; she had this boyish attitude." It's a pretty remarkable fusion of influences! For context, Captain Arthur Edward "Boy" Capel was a British polo player and highly intellectual politician who met Gabrielle in 1909 and initially financed her flourishing shops. His dapper dress sense is what inspired her to coin the inimitable Chanel look of straight, boxy blazers and chic sobriety, reflected on the Boy's own bold, sure lines and heavy hardware.

If you're going to Invest with a capital 'I' on a single evening bag, the Saint Laurent Kate best be it. Add Kathryn's preferred gold tassel into the mix for good measure, of course! That unmissable monogram gracing an otherwise nondescript, wallet style interior has remained the pinnacle of chicness for years—this here's a piece that we can easily guarantee is going to age a la fine wine. Contrary to popular belief, the current cool set is perfectly capable of taking it from gala glam to off-duty weekend in a flash; it'd be a terrible shame to confine it to nightlife cavorting, we think. Sultry miss Kate's slim, slinky metal chain and leather body, available in a rainbow myriad of colors and finishes, is versatile to a fault. A tip? Cop yours in the slightly roomier medium size for quick, seamless desk-to-drinks transitioning.

We've been smitten with the Gucci Sylvie ever since mastermind Alessandro Michele sent it down the Milanese house's Spring-Summer 2016 catwalk in September 2015. It wasn't long after that Kath got her dainty hands on a pretty white mini iteration! Boasting of telltale Web striping and chain detail streaked down its middle but none of the brand's often-associated interlocking Gs, Sylvie feels old and new all at once...and it's beyond refreshing. It's structured and ladylike, but our favorite feature has got to be its interchangeable straps: You've got the usual chain option and a bi- or tri-color grosgrain ribbon that's yours to loop around, double up, or simply tie any which way you please. Be spoilt for choice.