Darren Criss Wore a Barong by Francis Libiran to His Wedding

As an ode to his Filipino roots. 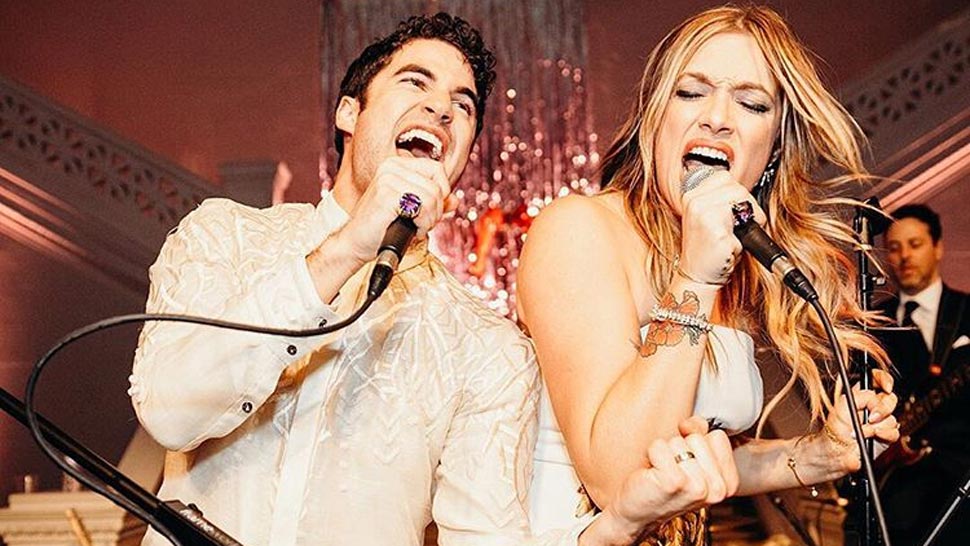 Blaine Warbler just go hitched everyone! Darren Criss, best known for his musical role in Glee and his ground-breaking performance as Andrew Cunanan in The Assassination of Gianni Versace, married his fiance Mia Swier on February 16 in a four-day wedding extravaganza in New Orleans.

For the wedding ceremony, the lovely bride wore a strapless crepe tulle gown by Vera Wang. Darren, on the otherhand, was his usual dapper self in an off-white Giorgio Armani silk grosgrain tux, accented with a bow tie, and completed with patent leather shoes.

However, never one to shy from his Filipino roots, Darren switched up his look during their reception and donned a barong tagalog made by Filipino designer to the stars, Francis Libiran, who posted the couple's Vogue wedding highlight on his Instagram. “We are on Vogue! Take a look at multi-awarded Hollywood actor Darren Criss’ most talked about wedding where he wore a custom-made Francis Libiran Barong Tagalog celebrating his union with Mia Swier.” the designer’s caption read.

The change in costume was to honor his Filipino mom, Cerina Criss, as they performed a sweet mother-and-son dance in the middle of the couple's musical celebration. While Darren’s hand-loomed barong is made with the traditional piña fiber, the real sentimentality to his look came in the little details. According to Vogue, if you look closely, you’ll notice that the intricate embroidery on Darren’s barong is reminiscent of tattoo patterns that famously originated from Cebuano natives. Quite possibly an ode to his Cebu-born mother. Really though, could he get any sweeter?

Below, Preview talks more to Francis about the barong tagalog, working with Darren, and more!

How did you end up dressing Darren for his wedding?

"My business partner Arsi Baltazar was contacted by Ashley Weston, the stylist of Darren Criss asking if we can create a modern design of the Barong Tagalog for Darren’s wedding. We were ecstatic upon hearing this considering that we had just met him and partied with him at the Golden Globe Awards last January in Hollywood."

Have you done clothes for him prior to this?

"This is the first time that I made clothes for Darren and I know that this will be a good start of a fruitful relationship."

Could you describe the details that went into the barong?

"Darren’s custom-made Francis Libiran piece is made of pure hand-loomed Piña fabric. We intricately embroidered the fabric with my signature Art Deco embroidery. The design of the embroidery is inspired by the famous Tattoo design patterns of the 'Pintados.'"

How involved was he in the process? Did he have any special requests?

"Darren and his stylist were very hands on. We were communicating on every detail up to the fitting. They simply wanted us to create an amazing design of the Barong Tagalog. I was thinking that it would be really nice for Darren to wear a traditional button-down Barong embroidered with Art Deco-patterned threadwork—a Francis Libiran signature design. We sent several design options and he chose two. During the fitting last February 5, he loved both Barongs but could not decide which one he was going to wear and told us that he will just choose on his wedding day."

"Seeing Darren Criss wear my design makes me extremely happy and proud to be Filipino. What better way to promote the Philippines but through the Barong Tagalog, and worn by a multi-awarded Hollywood star, who happens to be half Pinoy! How awesome is that? The entire process was smooth and I am so honored to have the privilege to be part of his very special day. What makes it even more special is that he chose to pay homage to his Filipino roots by wearing our national dress on his wedding day. This, for me is what makes Filipinos so amazing!"

UPDATED: Kryz Uy Was a Dainty Bride in Francis Libiran