SHOP: The Preview Beauty Bag Is Officially Here and It's the Ultimate Steal|Read more »
Fashion | By Ara Eugenio for Reportr - Jun 4, 2021

Crocs Is Cool Again and It's All Thanks to Tiktok

A ghost from the 2010s is making a comeback. 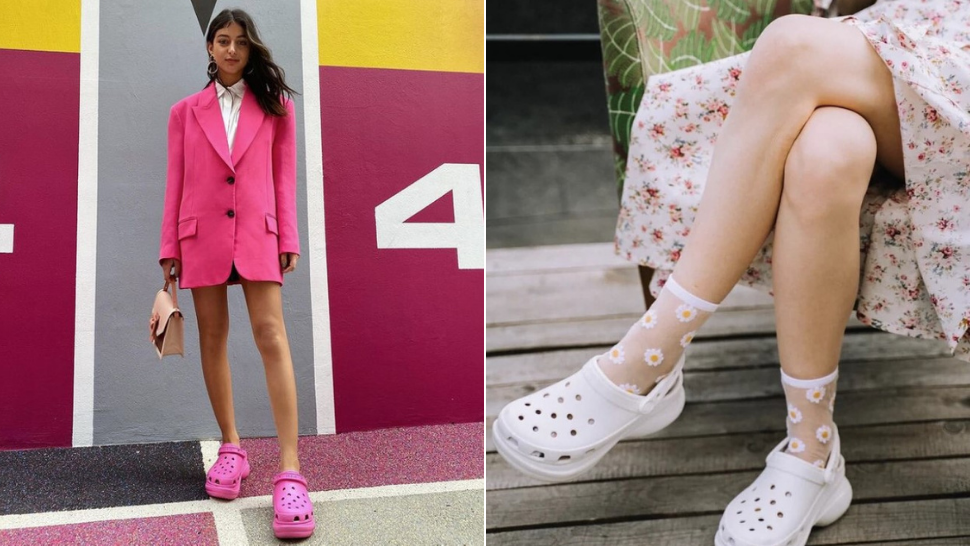 Last year, Filipinos looked at Crocs the way the Western world has condemned it: the most "uncool" shoes no one would ever want to be caught dead wearing it. As far as fashion was concerned, Crocs has long been a thing of the past.

And yet here it is again, bouncing back after over a decade of slumber. Data from market tracker iPrice showed Google searches in the Philippines for the rubber shoe brand surged at least three times in the past year.

One can also say the pandemic is to blame, as being holed up at home triggered the fashion trend where comfy is the "new norm". But it's not as if said trend hasn't been growing in recent years (take Birkenstock, another star in the ugly shoe category). Not to mention, even if the embarassment persists, it's hard to get called out for committing such fashion faux pas if one barely sees anyone at all.

But what's the main driving force behind this comeback no one asked for? Two answers: aggressive marketing and the hold Western pop culture has on Filipinos.

Crocs’ return of course is driven by itself. IPrice data show that Google searches for the brand would spike every time Crocs engaged in a collaboration, which suggests that western influences have a hold on Filipinos’ search interests, which often translate to buying decisions.

It was first noted in July 2020, when Google searches for Crocs  increased by 121% compared to the first month of the year. At the time, Crocs announced its collaboration with KFC, signaling the start of its upward trajectory in searches throughout the year.

Come September, Crocs collaborated with rapper-songwriter Bad Bunny which was soon followed by Justin Bieber. By then, searches grew 185% compared to the beginning of the year.

Then it peaked in December with over 210,000 searches or a 278% surge.  This was attributed to actress Priyanka Chopra’s endorsement and singer Post Malone’s collaboration with the love-it-or-hate-it brand.

Google search volumes are not as big in countries with relatively less U.S. influence compared to the Philippines like Vietnam, Thailand, and Malaysia, said iPrice. In Indonesia, searches peaked at 37,000 when its population is thrice as large as the Philippines.

Even local growth of trends like the green hair fad, Yeezys, and of course, cryptocurrency have largely been influenced by the western world's mainstream scene, the market tracker said.

Perhaps there's no better proof that Crocs has arrived once again than its presence on Gen Z's favorite platform, Tiktok. Crocs' return to the cool realm of the internet is more, in the words of the young cohort that refuses to be boxed by rules, "normalized" there among western teens. Some of Tiktok's biggest teen influencers have already endorsed the once uncool brand, dubbed as Summer 2021's most popular shoe.

It might only be a matter of time before this so-uncool-it's-cool shoe makes its way again to the Philippines, if it hasn't already. If this doesn't scare you, wanna know what else is trendy again in the U.S.? Low-rise jeans.

Would You Wear These Sequined Crocs on Your Wedding Day?

These Celebrities Will Totally Convince You to Start Wearing Crocs