Her voice will undoubtedly leave you in a trance. 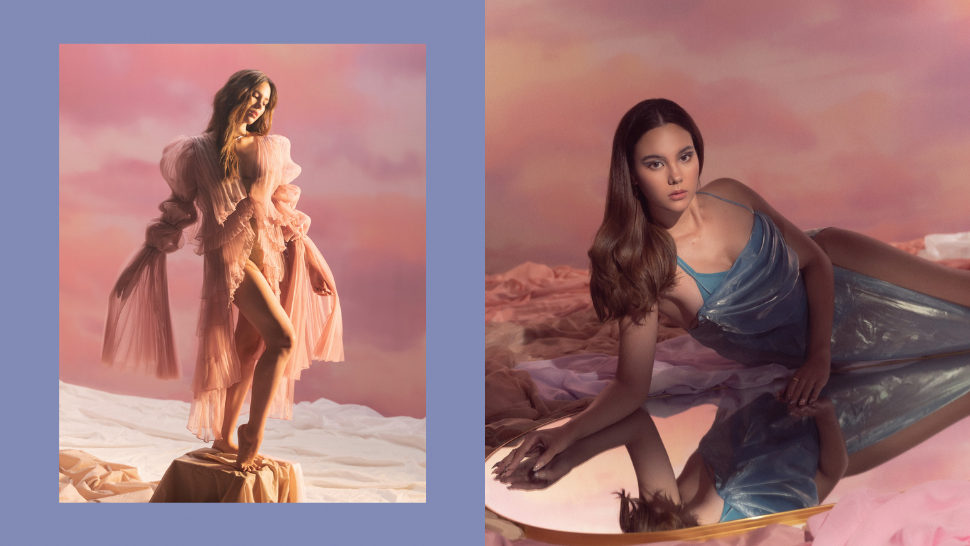 IMAGE Courtesy of Renzo Navarro
Her voice will undoubtedly leave you in a trance.
Shares
Share
Tweet
Comments

At the strike of midnight last Friday, Catriona Gray dropped her first songwriting and composition debut titled "Love Language." A lo-fi laden R&B track accompanied by an enchanting video, the beauty queen sings about longing for her lover's affirming words. "Say it, speak in my love language," she affectionately expresses in the chorus.

With direction by Trina and Raymond Dacones, and set design by Justine Arcega-Bumanlag and SASO Production, the video perfectly mirrored the artist's smooth voice and pensive lyrics. Of course, it would be amiss to not mention Catriona's awe-worthy ensembles, which are thanks to Gee Jocson. Preview reached out to the stylist and picked up some noteworthy facts about each of the five mesmerizing looks.

All of Catriona Gray's looks for her "Love Language" music video

1. A barefoot Catriona welcomed us into an ethereal pastel landscape, clad in a frilly, layered wrap dress over a skin-tone bodysuit.

"The styling for the music video took inspiration from [the] different silhouettes, [according to my interpretation], of the five love languages," Gee explains. In this first look, Cat was meant to represent the language of touch. "The elements we took in this layout [were] soft, feminine and flowy," the stylist states.

Cat's pink pleated dress was from Gianicka Gianina, while the bodysuit underneath it was from NOOD. Grazing her neck was a delicate Serpenti necklace from Bulgari. As similar-in-shade chiffon sheets flowed around her, the Filipino-Australian definitely looked soft to the touch.

2. The multi-hyphenate star then sported finger waves as she dramatically posed in a blue light. She was adorned in flora-inspired garments that were accentuated by striking silver jewelry.

The second ensemble of hers connoted acts of service. "We wanted something dreamy, like she [was] in a [literal] dream," Gee tells Preview, "[as if she was] in Alice in Wonderland." In these scenes, Cat was holding a tea party, filling up the cups of her guests herself.

She was in a satin petal harness top by Renz Reyes, partnered with a Jan Garcia tulip skirt. This intricate hairstyle of hers, as with all of her other looks, was achieved by hairstylists Paul Nebres and Brent Sales.

3. Later on, we saw Cat twinning in suits with a gentleman. She was donning head-to-toe black, with the exception of her hot pink eye-lids and peachy lips. Her partner, on the other hand, was in a soft blue ensemble by Kelvin Morales.

To symbolize the language of quality time, Catriona stood right beside her partner, embracing him from time to time. Gee explains the choice of outfit, saying, "For this silhouette, we wanted something masculine and structured, a contrast to the other layouts she [had.]"

This was a simple but quite lavish ensemble on the budding singer. Her sleek satin blazer was from Versace, while her necklaces and rings were, once again, from Bulgari. Gee mentions this was Cat's most expensive outfit for the video—the blazer was shipped straight off the runway from Hong Kong, with the likes of Megan Fox actually owning the same exact piece!

4. Up next, we started to see triple as Cat appeared in an iridescent frock, accented by gleaming jewelry. Her nails from Her Tribe Nails perfectly capped off the futuristic ensemble.

The language of receiving gifts was represented through this metallic ensemble. "We wanted Catriona to look shiny [and reflective while] wearing a lot of jewelry," Gee details.

The stylist shares Bulgari let their team pull out as many accesories as needed in order to accomplish the captivating visuals. Aside from the jewels, a leather cut-out dress and a resin piece by Yeen were layered over Cat's body.

5. We came full circle and met Cat again at the cloudy landscape. This time, she's laying over a mirror in a luxurious silk slip dress, matched with sharp eyeliner.

Last but not least, Cat embodied the essence of words of affirmation, which she professed was her personal love language throughout the song. Gee expresses that, "We wanted something that [was] silky, smooth [and also] [showed] some skin [in order] to emulate the rawness of her beauty."

Slipped into original pieces by Cebu-based designer Robert Hiyas, Cat's cowl neck frock and bodysuit took four to five days to make before it was shipped to Manila. Alongside them were simple white Nadia heels from Capsule Culture.

Now that you've seen all of Cat's alluring looks, you have to catch them in motion. Watch the full music video below:

*Answers have been edited for clarity