LOOK: Julia Barretto Is Ready for Mature Roles, Which Means Living Life on Her Own Terms|Read more »
Fashion | By Maura Rodriguez - Jun 5, 2021

“I don’t feel like I can take ownership for the side-part [hair], the slit in the dress, or the ear cuff! It's not mine to own.” 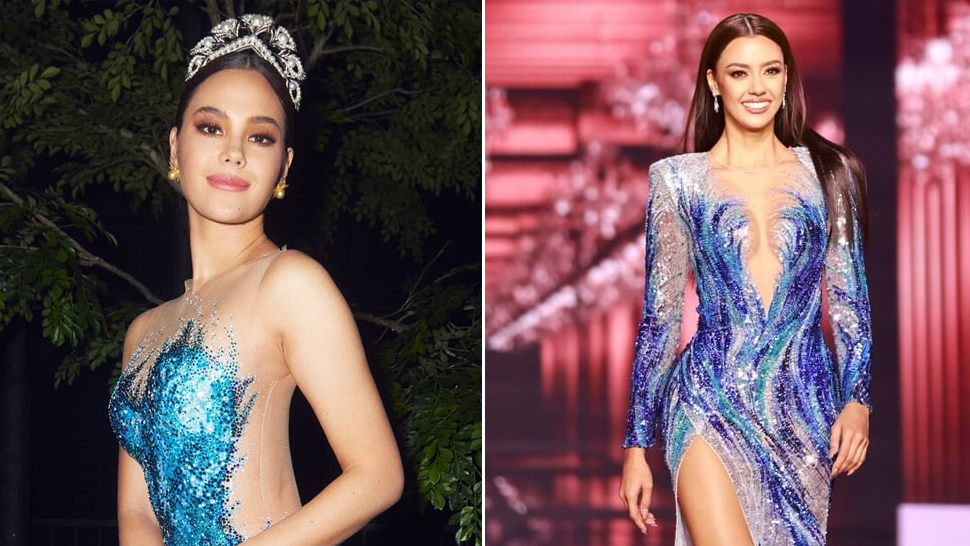 IMAGE Instagram/catriona_gray, Instagram/missuniverse.in.th
“I don’t feel like I can take ownership for the side-part [hair], the slit in the dress, or the ear cuff! It's not mine to own.”
Shares
Share
Tweet

In case you missed it Catriona Gray just released a single called “Raise Your Flag” or “RYF” in time for Independence Day and Pride Month. During the global press conference for her debut single with Star Music, the beauty queen shared that the song is meant to empower and inspire people to raise their own flags for the advocacies or causes close to their heart.

But hot off the heels from the Miss Universe 2020 competition, showbiz reporter Albert Byran of Chikkaness raised a question that’s been on the minds of a lot of pageant fans during and after the competition. “How do you feel when [Miss Universe] candidates or contestants who copy your performance? Parang nagiging copycat?” he asked.

"So I understand maybe the resemblance in silhouettes? But I don’t feel like I can take ownership for the side-part [hair], the slit in the dress, or the ear cuff! It's not mine to own.”

Here's a look back at Catriona's crowning look for the Bb. Pilipinas 2018 pageant, where she wore a patriotic ear cuff she designed herself with Tessera Jewelry.

The beauty queen is obviously referring to the numerous comparisons Filipino netizens have pointed out in regard to Miss Universe Thailand Amanda Obdam and how she was styled during the preliminaries—and of course, her final evening gown look. The Miss Universe Thailand organization, along with other vigilant Twitter users, were quick to point out that Amanda’s beaded blue gown was in fact inspired by the waves of Phuket and is reminiscent of former Miss Universe titleholder and Miss Thailand Bui Simon back in 1988.

"'ANDAMAN'—The HEART and SOUL of 'The Island Girl'. The core idea of the 'ANDAMAN' dress is based on Amanda’s origin, “Phuket”, the beautiful island located in the Andaman sea, the southern part of Thailand. It is the place where she always calls “home”, and where her heart belongs." writes the Miss Universe Thailang organization on Instagram.

The term “Catriona Gray Effect” has also been floating around ever since the pageant. This encompases how other beauty queens all across the globe have been trying to emulate Cat’s winning beauty queen formula. Preview Creative Collective writer Yani Mayo actually wrote a think piece on the subject to further delve into the phenom.

“I also know that in the journey of representing your country and pageantry it is all about the girl feeling her most beautiful, her most empowered and her most confident. So if that is in [a similar] style, then own it! That doesn’t necessarily put them at a disadvantage,” Cat points out. “People may have a recall na, ‘Oh, that's a similar dress!’”

“But each girl has her own journey. And if they went with that [particular] style it means that they feel beautiful and confident in that. And who are we to say that it affects their journey? It's their journey and it's how they wish to portray themselves through it!”

Well said! If anything, Catriona is all here for empowering women and not pitting girls together in any way. Like she said, it’s “their own journey.”

What Are Dior Dway Slides And Why Do Celebs Love It?