SHOP: The Preview Beauty Bag Is Officially Here and It's the Ultimate Steal|Read more »
Fashion | By Rianne Motas - Mar 29, 2022

Did You Know? The Sharmas' Outfits in "Bridgerton" Were Inspired by Their Indian Heritage

Their outfits and hair and makeup also change as they get closer to Anthony Bridgerton. 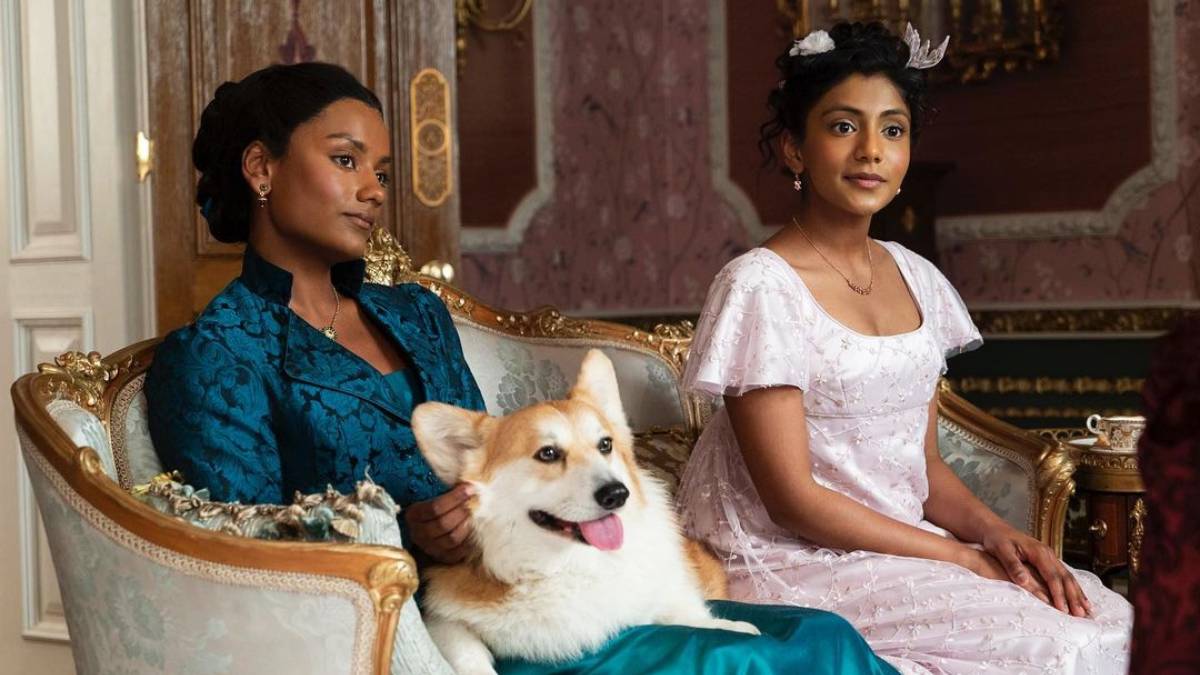 IMAGE Bridgerton/Netflix
Their outfits and hair and makeup also change as they get closer to Anthony Bridgerton.
Shares
Share
Tweet
Comments

The second installment of our favorite bodice-ripping romp through Regency London's high society has finally arrived, and the ton is already buzzing about it! Having premiered last Friday on March 25th, Bridgerton’s season two is back with more gossip, deceit, and scandals to rival its smash-hit first season.

We sat down with Bridgerton’s costume designer, Sophie Canale, who moved up from her assistant position in season one to inherit the show’s massive workshop and in-house atelier. She broke down her team's thought process when it came to planning and producing looks for the ton this season, especially for the newly arrived family, the Sharmas.

The Sharma family's quiet regality is readily evident at first glance. At the start of season two, the ton is clearly mulling over their arrival, and extra eyes are glued onto them as they are a strikingly attractive lot. To stir up the audience's curiosity even further, according to Canale, we should take a closer look at the Sharma sisters' outfits for they have a lot of easter eggs to offer.

“Originally, I started with the Sharmas and kind of started with looking at jewel tones from Indian heritage,” she revealed. “With Kate, in particular, I used a lot of jewel tones for her character. But then looking in-depth at the characters and how they are, I kind of wanted to show the difference between the two sisters." Canale elaborated that since Kate is essentially the headstrong older sister to her soft-hearted younger sibling, Edwina, she dressed her up in rich jewel tones like emerald greens and deep blues to express her strong nature. On the otherhand, Edwina’s softer disposition demanded more muted pinks, peaches, and pale-colored clothes.

Canale also wanted to give homage to the Sharma’s Indian roots saying, “With the heritage of India introducing various kinds of fabric and embroidery, we used that to have a feel as to where they came from, but also since they’re in the Regency era, we also had to incorporate England as well.”

Aside from that, she tells viewers to look out for certain shades in the sisters' looks as color plays a big role in highlighting their growing relationships with viscount Anthony Bridgerton.

“Kate’s stronger color palette matched Anthony’s color palette a lot because Anthony is a lot darker and more serious this season as compared to the last, so that’s why I pushed for darker tones for him. I wanted him to resemble the way he was feeling,” Canale explained. “Both Kate and Anthony are in this journey to discover their emotions this season, I think having those stronger and darker colors for themselves is really a representation of them trying to uphold their roles, find love, and understand love as well. There is a journey to both of them and how they become lighter in the end.”

Hair and Makeup Department Head Erika Okvist also had a bit of fun when it came to conceptualizing looks for everyone. That said, she particularly enjoyed creating hints that foreshadowed the turn of events through Kate and Anthony’s hair and makeup.

“Kate Sharma is a very no-nonsense, very strong character. She will present herself accordingly with what she needs to do,” she told Preview. “She doesn’t make a super amount of effort, like she’s got other things she wants to do than just sit in front of the mirror and sort her hair out. Her hairstyle is based on something she can probably do all by herself!”

That changes subtly as Kate evolves as a character and—minor spoiler alert—falls in love with the viscount. “She’s always very presentable, always very sleek. But then, she starts falling for Anthony, maybe she forgets to tuck that little bit of hair behind her ear because she starts playing with it when she’s thinking about him.”As you get to the later episodes, you’ll also start to notice that Kate becomes less stiff in her appearance as she puts on a little bit more color on her cheeks or lips.

There's no doubt that what happened to Kate can be paralleled to how we react when we're crushing on someone, and just like the costume department, Bridgerton's hair and makeup crew did an excellent job of bringing that splash of reality to life!