WATCH: 10 of the Funniest TikTok Videos from Local Celebrities|Read more »
Fashion | By Nicole Cruz - May 17, 2020

This Bride Tied the Knot in a Blush-Accented Ball Gown, and We’re Obsessed

She proves that adding color to your wedding dress is a chic and unique touch. 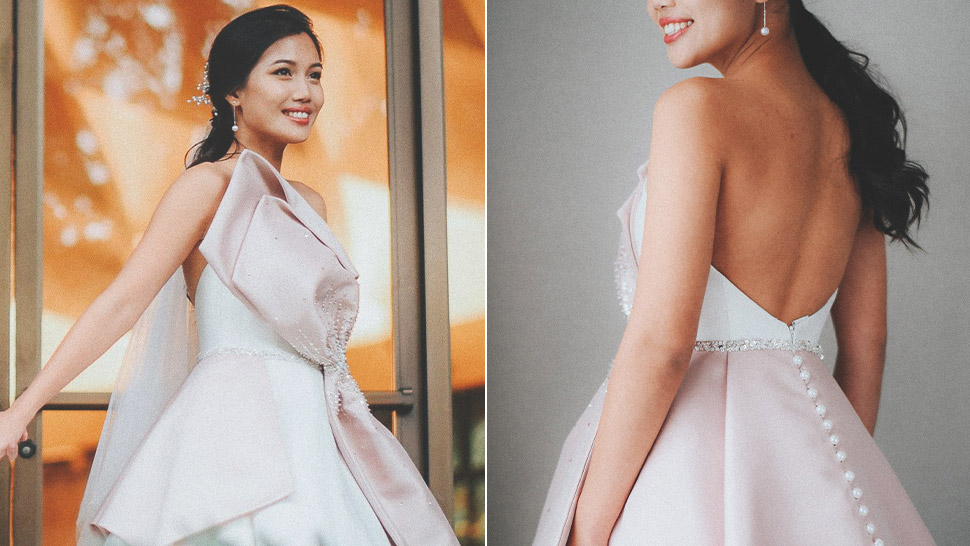 IMAGE BRIAN VENANCIO PHOTOGRAPHY
She proves that adding color to your wedding dress is a chic and unique touch.
Shares
Share
Tweet
Comments

When it comes to designing one’s wedding dress, one often thinks about details like the beading, appliqués, and other intricate touches. Adding color isn’t really top-of-mind. It’s a little unconventional for some, but this Filipina bride is making a case for a pop of color, albeit in a fresh and subtle way. Sasha Lim Uy tied the knot back in 2017 wearing a Rosenthal Tee gown. What was otherwise an ordinary ivory frock was accented with a blush-hued oversized bow that cascaded from front to back into a peplum with glimmering rhinestones. She also had her entourage wear blush dresses to complement her gown.

While the color itself isn’t anything new in the wedding scene (many brides have chosen the dainty shade as the color theme), we love how Sasha went the road less traveled by adding it to her gown itself. To find out more about her decision-making process, as well as the story behind her unique dress, we chatted with Sasha to find out more:

Rosenthal Tee was the perfect match for Sasha’s personality and aesthetic.

Sasha shares that Rosenthal, whom she fondly calls by her nickname, Chantal, was her friend from college, and she has always admired her work ethic as a designer.

Aside from that, Rosenthal’s aesthetic fit Sasha’s peg quite perfectly: “I was very picky about choosing the designer to make my gown. I had a vision and a peg in my head. It had to be minimalist and a little bit avante garde. I feel like you need a designer who lives that aesthetic to truly understand it, hence execute it well. I knew that that was the style that Chantal also espoused… If you get a usual bead and lace kind of designer and then you made them go minimalist… I didn't want to force a designer into a style that they weren't really into.

Having a classic dress was the top priority for Sasha, so the color blush seemed like a great choice.

“I just wanted something classic. I grew up in a Chinese family, so I've seen all those gowns that are very loud and very color-blocked and heavily beaded. I feel like I would regret it after a year. I wanted something timeless. I felt that something subtle would work to that effect. My peg was actually cappuccino! But Chantal told me that blush would create a nicer effect,” Sasha says.

“When I got married, everyone was assigning blush to their wedding. My friend who got married a year earlier also had a blush theme, but I think that's why it's so classic.”

Rhinestones and pearls were the details that tied the whole look together.

Sasha shares that she had a “no lace, no beads” policy. “I always watch Say Yes to the Dress and I always think all the lace dresses look identical, so I just didn't want to go that route. Also, I never tried lace, but I feel like I'll only be happy with the really, really, really ridiculously expensive kind, and my husband wouldn't really allow me that budget.” she says.

To accent the gown, Rosenthal chose rhinestones and pearls as alternatives. “What's funny is, I don’t really remember the drawing having pearls, but when I tried it on during one of the fittings, I was so pleasantly surprised that there were pearls!”

“Pearls are my birthstone, and it all just came together. I didn't tell Chantal tha but she added pearls down the back of the peplum. I wanted a pearl headpiece and I couldn’t find anything here that I liked, then a friend from the US got me a few options! Then, my husband's wedding gift to me was a pair of pearl earrings as well! It was fate!”

“I wanted to look like the bride but I didn’t want to look bridal.”

Sasha admires two fashionable TV characters, namely Blair Waldorf (Gossip Girl) and Carrie Bradshaw (Sex and The City), so she wanted a dress that was in line with this exact sartorial taste, which Rosenthal executed well.

“I was never the girl who planned a dream wedding growing up. This gown was something I wanted right at that moment, it was my personal style at that age. I really gave it a thought because I still wanted to like it years after, and I do.”

“[My gown] is very unorthodox, right? A friend called it a MET Gala gown. I wanted to look like the bride but I didn’t want to look bridal. I knew that it wasn't going to please everybody, lalo na those that have a set vision of what a wedding gown should look like, so I didn't bring anyone to the fittings. I wanted to love it on my own without being swayed by people. I'm really into Blair and Carrie (I didn't tell Chantal this) but I feel like she captured it without even knowing.”

She decided on Vera Wang RTW for her entourage as this was easier to manage than custom-made gowns.

Sasha assigned a design from Vera Wang’s White bridesmaid collection to each person in her entourage. She chose RTW so that they could wear the gowns again even after the wedding. “I just made everyone pick their sizes, ordered, and had them shipped here,” she says.