This Filipino Sneaker Collector Got Air Diors Before Everyone! 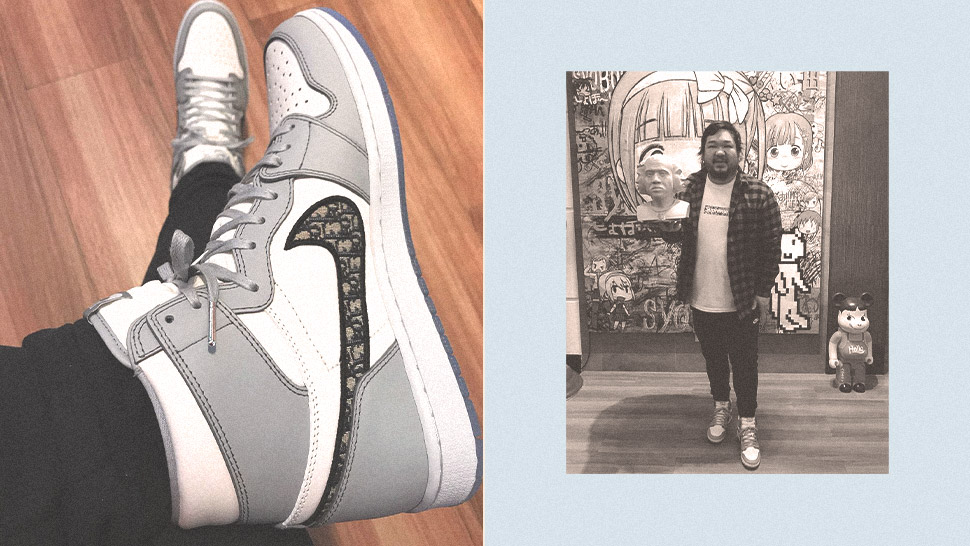 You read that right. It’s only been 5 days since Hypebeast announced the official launch of the microsite where one can order a pair of the limited edition Air Jordan 1 High OG Dior Sneakers. But we spotted the Air Diors as early as May 9 in the Instagram feed of collector Christian “Big Boy” Cheng, who also posted a photo wearing them on May 12.

With his left foot propped on his lap, the monogrammed swoosh and winged “Air Dior” logo are instantly visible on the leather high tops. Zoom in, and you’ll see the same Dior pattern in tone-on-tone ecru on the padded tongue of the sneaker. Swipe right further on the first post above and you’ll be able to appreciate the Kim Jones designed sneaker from all angles, including the “Dior” and “Air Dior” logos on the soles.

We earlier reported on the guidelines to acquiring a pair of these Dior x Nike kicks. You can only register in the site once, and you can only choose from one of two models: Highs ($2,200 or around P109,750) or Lows ($2,000, around P99,775). After selecting your size and the pop-up pickup location, Hypebeast reports that "if selected, you will receive an email notification on or after July 1 with a QR code linked to your name, which must match the photo ID you present upon pickup." It almost seems it will be like winning the lottery if a message from Dior appears in your inbox.

For one to secure these well before their release date requires some serious connections, and paying a premium. Esquire Philippines reports that Bigboy paid a whopping $17,000(around P851,000) to get first dibs on the pair. They further surmise that apart from how covetable this collaboration would be to a true collector, a splurge like this could also be considered an investment: “Taking his shoe fetish aside, ordinal Jordan 1’s are considered highly collectible and just last month, a pair of Jordan 1 with the black and red colorway worn and signed by Michael Jordan himself was sold at Sotheby’s for $560,000, or about 4 times the estimated price.”

It shouldn’t be a surprise, though, that the man who’s been featured many times over for having what’s possibly the most expensive sneaker collection in the world would have first dibs on these highly-coveted designer kicks. Bigboy, who is the owner of Secret Fresh Gallery and a marketing executive for Uratex, is a known collector of art, toys, Supreme merch, and many other pop culture and limited edition fashion collaborations that he features in both his Instagram account and YouTube channel.

As of press time, registration to purchase one of the 8500 pairs is already closed on the microsite. Bigboy Cheng is definitely one lucky guy!