LOOK: Here’s Where You Can Get Aesthetically Customizable Mixtapes to Gift Your Loved Ones|Read more »
Fashion | By Bea Jocom - May 4, 2015

7 BABY NAMES IN THE RUNNING FOR THE PRINCESS OF CAMBRIDGE

The Duke and Duchess have yet to decide on a name. 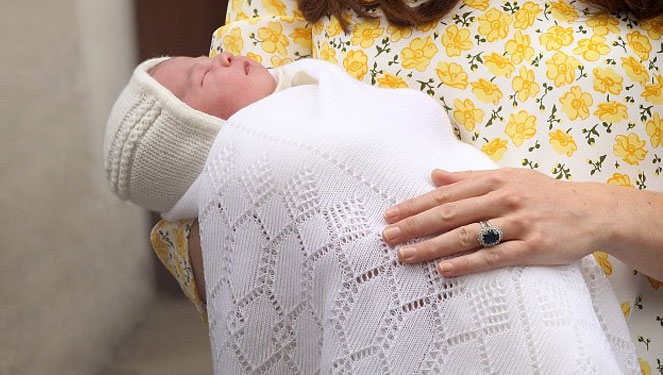 While the whole world was waiting for #MayPac to happen, up north in London, the Brits were all eyes and ears on the happenings outside St. Mary’s hospital. Just 12 hours after the Duchess of Cambridge was admitted to the Lindo Wing of the historical facility, Kate gave birth to a bouncing baby princess. England was beyond thrilled that even the London Bridge was lit pink! This is because Prince George’s little sister is the first princess who is Cambridge born in 182 years as well as the first princess born into the Royal Family in 25 years. Now fourth in line to the throne, yup, she is quite a big deal.

We can’t wait to see her wear all the designer frocks and little hats, but before all that, she must first be named. It may only be a couple of hours now before the royal family announces what they'd like to call baby number two, but the bets are still surging (people are betting real money as to what the baby's name will be!), even breaching the £1 million mark. Below are the six million-dollar-baby names up on the charts.

They can call her: Ali

She’s barely two days-old and we bet she’s already in wonderland. There are two Alices in the line of Prince Philip (the great grand dad of the new-born princess) and is the name currently leading the polls. This is perhaps because it has a modern ring to it and still be able to preserve  name continuity as they have been doing for hundreds of years.

They can call her: Charlie

Coming to a close second place is Charlotte, which is a strong contender considering the name is the nod to her grand dad, Prince Charles. We reckon she will be all sorts of bad ass.

They can call her: Vicky a.k.a the Posh Princess

We’re sure there’s a Queen Victoria somewhere down their history, but the only Brit Victoria we care about is posh with a hint of spice.

They can call her: Liv

The name Olivia just screams fashion girl to us and with Kate as her mom, this is very likely to happen. If Prince George’s good looks is bound to break hearts, we’re pretty sure this princess will have her fair share of guys chasing after her as she runs in her Nicholas Kirkwoods.

They can call her: Liz or Queen L

The name remains to be a frontrunner as it is obviously to honor her great grandmother and current queen. Seems rightful though, because she might just follow her footsteps and be the next great female ruler in perhaps the year 2080. Queen Elizabeth III sounds good to us.

They can call her: Di

A lot of people are saying that it is likely the Duke and Duchess will find a way to insert the former’s late and well-loved mother’s name into his first daughter. But we hope they decide against it as there will only be one Princess Di.

We just thought we'd throw it in there as well. Think of all the memes awaiting the little princess! Lol.

She could be named Her Royal Highness, Princess Alice Charlotte Victoria Olivia Elizabeth Diana of Cambridge, for all we know. But whatever they decide on, we can’t wait to be mesmerized by the princess.